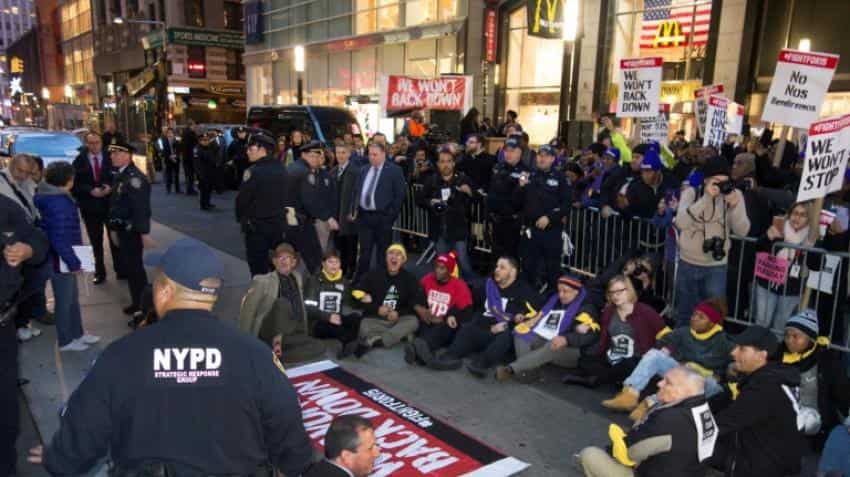 In New York, a group of 500 that included airport and taxi workers joined a union-backed "Fight For 15" march in front of a McDonald`s fast food restaurant near Wall Street. Image Source: AFP
Written By: AFP
RELATED NEWS

Workers from fast-food chains, airports and other service industries rallied in US cities on Tuesday as part of a nationwide day of disruption to demand union rights and a minimum wage of $15 an hour.

In New York, a group of 500 that included airport and taxi workers joined a union-backed "Fight For 15" march in front of a McDonald`s fast food restaurant near Wall Street.

Demonstrators briefly blocked Broadway before police arrested about 20 of them, with other rallies organised in Chicago, Los Angeles and Fort Lauderdale in the state of Florida.

Workers joining in included cabin cleaners, luggage handlers and other staff at O`Hare, Los Angeles and Fort Lauderdale airports. However, flights were not expected to be disrupted.

Some 40 people were arrested near a McDonald`s near downtown Los Angeles early on Tuesday after they refused police orders to clear an intersection.

Protesters also gathered peacefully shortly before noon at Los Angeles airport and entered one of the terminals without disrupting traffic or flights, airport officials said.

In Florida, the rally was also due to include non-union home health care workers as well as members of the Service Employees International Union.

The "Fight for 15" campaign began exactly four years ago, when fast-food workers walked off the job to press for a doubling of the minimum wage, a demand that later spread to other sectors.

The movement scored a big win in April, when New York Governor Andrew Cuomo signed legislation to lift the minimum wage in New York state to $15 an hour.

The increase will take effect gradually, however, applying to all New York city employers by the end of 2019 and all of state companies later under a schedule set by the state.

Los Angeles officials have also approved a law that would raise the minimum to $15 an hour by 2020. The same increase would gradually apply statewide by 2022.

The federal minimum wage stands at $7.25 an hour, but workers have won $15 an hour in a number of jurisdictions, including the state of California and in the Pacific Northwest city of Seattle.

Other states, such as Arizona and Maine, have passed laws setting the minimum wage at $12 an hour.

In the Democratic camp, both Hillary Clinton and Bernie Sanders came out for a $15 minimum wage during the White House primaries. While President-elect Donald Trump has made conflicting statements on the issue, he has at times appeared to endorse a $10 federal minimum.