The UN General Assembly has adopted a coronavirus-responsive procedure for the Security Council election next month in which India is assured a non-permanent seat. 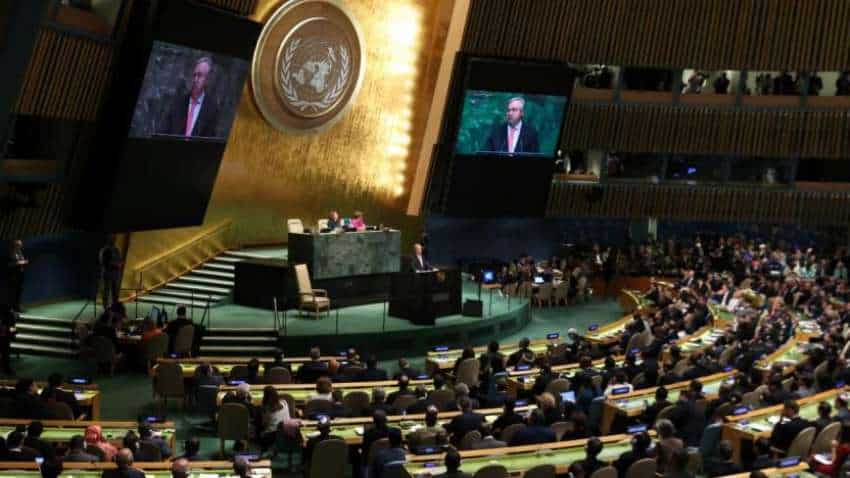 For India, the election is likely to be only a formality since it is the only candidate for the Asia-Pacific seat for the two-year term starting in January 2021. Photo: Reuters
Written By: IANS
RELATED NEWS

The UN General Assembly has adopted a coronavirus-responsive procedure for the Security Council election next month in which India is assured a non-permanent seat. General Assembly President Tijjani Muhammad-Bande`s spokesperson Reem Abaza announced on Friday that the voting system using paper ballots with delegates coming in small groups was unanimously approved for the election scheduled for next month.

Because of the COVID-19 restrictions in New York City, the UN has not been holding in-person meetings and a system had to be worked out for the elections without the plenary meeting during which the voting usually takes place.

For India, the election is likely to be only a formality since it is the only candidate for the Asia-Pacific seat for the two-year term starting in January 2021.

Therefore, voting may not be necessary unless a country asks for a secret ballot under the procedure that has been adopted.

Under proedure, delegates will come in batches during prearranged time slots in order to maintain social distancing as a COVID-19 to a designated place and vote with paper ballots under the supervision of Secretariat staff.

If no country wins a two-thirds majority in the first round, further rounds will be held on subsequent days.

The 10 non-permanent seats are allocated on a regional basis and the two-year terms and elections are staggered soAthat each year five are elected.

While India is unopposed for the Asia-Pacific seat and Mexico for the Latin America-Caribbean seat, there are contests for the Africa and the Western Europe seats.

Kenya and Djibouti are facing off for the Africa seat.

The West European region category includes certain other countries that do not fall into other regional roups.

Canada, Ireland and Norway are competing for the two seats in this group.

Next January, India will succeed Indonesia, which completes its two-year term, and join Vietnam, which was elected to the other Asia-Pacific seat on the Security Council.

The new system for the Security Council elections was itself adopted under what is known as Silence Procedure, which the Assembly has been following during the pandemic closures when in-person meetings are banned.

Under the Silence Procedure, the Assembly President circulates resolutions to all the members and if no one objects within 72 hours they are considered adopted.

An eVote procedure was one of the systems considered for the Security Council election but was dropped because it would have taken a long time to come up with a fool-proof mechanism.

The elections to the Security Council used to be held in October but they were shifted to June starting in 2015 to give the incoming members time to prepare for their role on the body.