Antonio Guterres has warned that the world could fracture into two competing blocs - led by the US and China - with their own Internet, currency, trade system and military strategy. 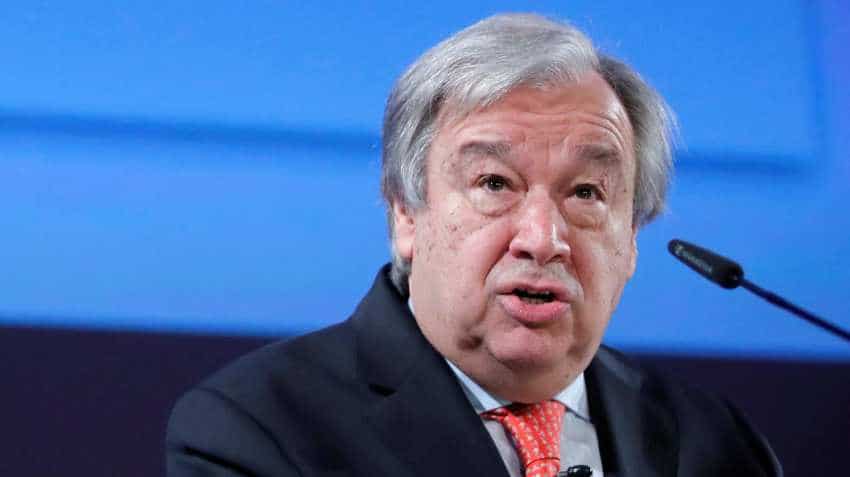 UN thanks India for paying its dues early

With trade and geopolitical tensions heating up, UN Secretary-General Antonio Guterres has warned that the world could fracture into two competing blocs - led by the US and China - with their own Internet, currency, trade system and military strategy. "I am troubled by the growing friction among the two largest global economies," he told reporters here on Thursday, referring to the tensions between China and the US and its allies even though he did not name them. "We need to learn the lessons of the Cold War and avoid a new one."

In his exposition of the threats from hotspots around the globe, Guterres promised to "intensify our surge in diplomacy for peace". Describing a possible return to a Cold War scenario, he said: "Looking into the not so distant future, I see the possible emergence of two competing blocs - each with their own dominant currency, trade and financial rules, their own Internet and Artificial Intelligence strategy, and their own contradictory geopolitical and military views.

"We still have time to avoid this... With leadership committed to strategic cooperation and to managing competing interests, we can steer the world onto a safer path."

The emerging threat to the global system is seen in the US-China faceoff on many fronts: a trade war of tariffs and counter-tariffs amid stalled negotiations, with US President Donald Trump announcing a 10 per cent tax on Chinese imports worth $300 billion on Thursday; the US trying to stop the adoption of Chinese technology like Huawei`s 5G communication systems amid fears of possible espionage; allegations of intellectual property thefts; military confrontations between China and democracies in the Indo-Pacific area; Beijing cutting off access to vast swathes of the Internet for its citizens creating a self-contained system, and China`s expanding trade and development system, One Road, One Belt, along with the Asian Infrastructure Investment Bank, and the International Monetary Fund (IMF) recognising the yuan as a Special Drawing Rights (SDR) currency.

During a virtual tour of global hot spots, Guterres also said he was concerned about the growing tensions on the nuclear front as the Intermediate Nuclear Forces Treaty (INF) ends on Friday when the US withdrawal from the pact with Russia is complete.

"The world will lose an invaluable brake on nuclear war. This will likely heighten, not reduce, the threat posed by ballistic missiles.

"Regardless of what transpires, the parties should avoid destabilizing developments," he said.

The Secretary-General asked the US and Russia to extend the 2010 New Strategic Arms Reduction Treaty (New START) that expires in 2021 "to provide stability and the time to negotiate future arms control measures".

Guterres also urged all nations to work together on the review of the Nuclear Non-Proliferation Treaty (NPT) next year. (India is not a signatory to the treaty as it considers it discriminatory giving special rights to the original five nuclear weapon states.)

He said that he was worried about rising tensions in the Persian Gulf where "a minor miscalculation could lead to a major confrontation" with "devastating implications on global security and the global economy".

He called for "maximum restraint" by all countries and added, "I stress the need to respect the rights and duties relating to navigation through the Strait of Hormuz and its adjacent waters in accordance with international law".

The US imposed sanctions on Iranian Foreign Minister Mohammad Javad Zarif on Wednesday. The two countries have attacked drones in the region and Britain and Iran have seized petroleum tankers belonging to each other.

UN thanks India for paying its dues early

As IPL 2020 rounds the final bend, competition heats up