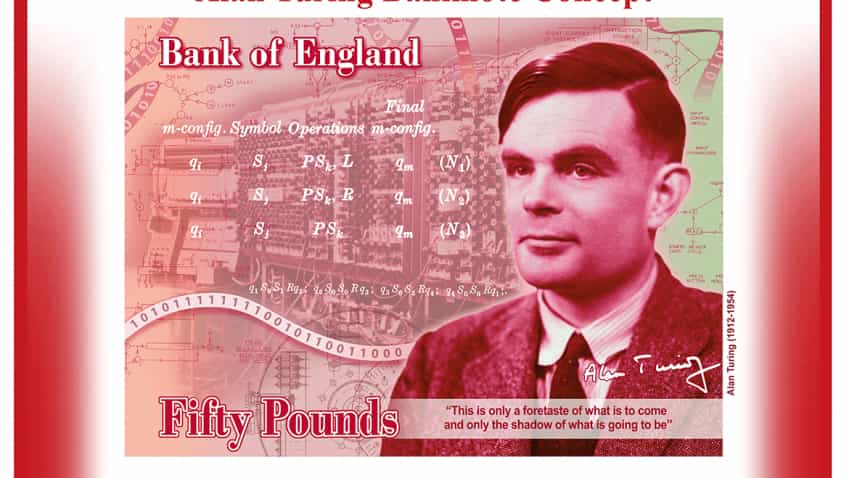 Alan Turing will feature on the new design of the Bank of England`s 50 pound note, Photo: bankofengland.co.uk
Written By: IANS
Edited By: Harish Dugh
RELATED NEWS

British computer pioneer and codebreaker Alan Turing will feature on the new design of the Bank of England`s 50 pound note, it was revealed on Monday.

He is celebrated for his code-cracking work that proved vital to the Allies in World War Two, the BBC reported.

"Alan Turing was an outstanding mathematician whose work has had an enormous impact on how we live today," Bank of England Governor Mark Carney as saying.

"As the father of computer science and artificial intelligence, as well as a war hero, Alan Turing`s contributions were far ranging and path breaking. Turing is a giant on whose shoulders so many now stand."

The work Turing, who was educated in Sherborne, Dorset, helped accelerate Allied efforts to read German Naval messages enciphered with the Enigma machine.

The 50 pound note will be the last of the Bank of England collection to switch from paper to polymer when it enters circulation by the end of 2021, the BBC reported.

The note was once described as the "currency of corrupt elites" and is the least used in daily transactions.

However, there are still 344 million 50 pound note notes in circulation, with a combined value of 17.2 billion pounds, according to the Bank of England`s banknote circulation figures.

In 2013, he was given a posthumous royal pardon for his 1952 conviction for gross indecency following which he was chemically castrated. He had been arrested after having an affair with a 19-year-old Manchester man.