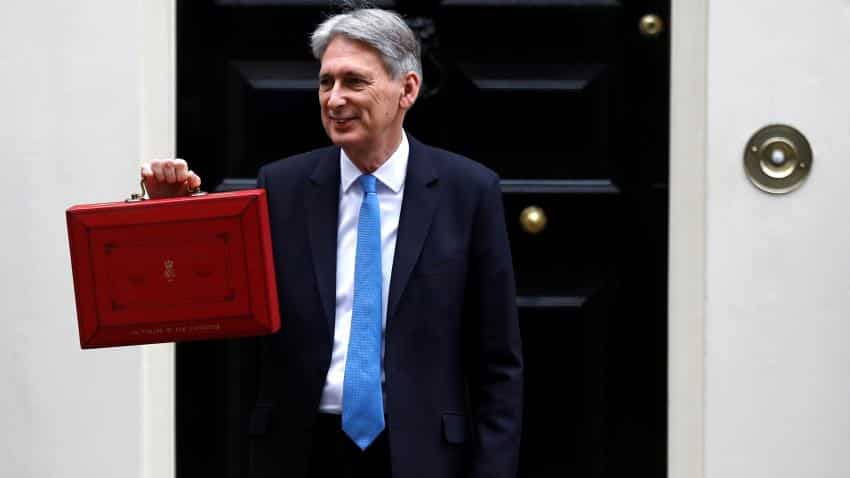 Britain has slashed its official forecasts for economic growth and expects to borrow sharply more going into the next decade, finance minister Philip Hammond said as he delivered a budget statement in parliament.
The following are a selection of comments by economists, business representatives and investors:
MARTIN ARNOLD, DIRECTOR AND FX STRATEGIST AT ETF SECURITIES
"Net debt to GDP is expected to peak at 86.5 pct this year but dismal growth estimates, which don’t top 1.6 pct by 2022, are unlikely to light a fire under the pound."
"Alongside reduced growth forecasts, the fact that the government is allocating another £3bn to support the Brexit process is unlikely to boost economic sentiment. After Brexit was supposed to save money for the UK, this seems like throwing good money after bad."
"The improving creditworthiness of the UK was one positive development from Chancellor Hammond’s budget: fx markets will be closely following the estimates for public sector net borrowing, which is forecast to fall from 3.8% of GDP in 2016 to 2.4% in 2017 and 1.9% next year."
ROB AIRD, PARTNER AT LAW FIRM ASHURST
"Many businesses, including those in the financial services sector, will be hoping that the additional £3bn of funding for Brexit preparations is put to good use in concluding the withdrawal talks within the next few weeks, and reaching a swift agreement for both future trade and transitional arrangements, which both support industry. If that can be achieved, most would agree that the money was well invested."
MICHAEL METCALFE, GLOBAL HEAD OF MACRO STRATEGY AT STATE STREET
"The government has committed funds to help with the preparation for Brexit contingency planning, but the real challenge for UK markets revealed in the budget came from the Office for Budget Responsibility (OBR) and the significant downgrades to the UK growth outlook. Still high inflation and an expected weakening in growth provide a potentially troubling backdrop for markets even without the political uncertainties created by Brexit."
VIRAJ PATEL, FX STRATEGIST AT ING
"One thing worth pointing out that institutions like the OBR and the BOE will take the most cautious stance when forecasting future growth so what we are seeing from them is the worst case forecasts."
"The government is the key in unlocking the next phase of UK growth depending on what they come up with at next month`s (EU) summit and that may materially alter those projections. So if they can come up with a sensible (Brexit) transition agreement, we should see the pound price higher."
ALEX BUTTLE, DIRECTOR OF MOTORWAY.CO.UK
"The government needs to be far more aggressive with supportive tax breaks and incentives to help consumers make the leap to the more expensive electric car models. It needs to be a no-brainer for motorists to take the leap, and we’re just not there yet."
CRAIG ERLAM, MARKET ANALYST AT OANDA
"The only thing that’s grabbed the markets attention is the fairly significant downgrade to growth forecasts by the OBS which saw sterling come off a little and the FTSE rise in response, due to the negative correlation between the two."
"The inability of government to make any major concessions has made it less of a market event than it was in the past. Barring any surprise announcements, I don’t see any substantial moves, outside of individual stocks that have been influenced by small changes."
PHILIP SHAW, ECONOMIST AT INVESTEC
"Not surprising to see a downward revision to productivity. Another factor is that borrowing forecasts have been increased and that is undoubtedly partly due to the softer growth outlook. How much of this reflects budgetary measures, we don’t know. We know there’s a couple of giveaways such as higher health spending but for the moment we don’t have a complete picture of how much that actually will be.”
NEIL JONES, HEAD OF HEDGE FUND FX SALES AT MIZUHO
"The FX market looks a little disappointed in the downward trajectory for growth without any bazooka of fiscal stimulus - sterling is trading lower on this." "We were waiting for some fiscal measure to counter the lower growth forecast - that`s not happened."
DAVID CHEETHAM, CHIEF MARKET ANALYST AT XTB
"The pound has dropped in recent minutes after large downward revisions to economic growth projections, alongside lowering previous forecasts for business investment and productivity, showing the clear difficulties that lie ahead for the UK economy."
DAVID A. MEIER, UK ECONOMIST AT JULIUS BAER
"The budget is in line with what we expected. Putting aside money for Brexit is quite wise. Net borrowing was a bit bigger than expected but still on track to beat the target, so this opened up some hopes that we would see a possibility for additional stimulus, so expectations have been a bit too high on Hammond`s capabilities.
"He has shown some caution with regard to increasing spending, which many had hoped for. I think it’s a move in the right direction.
"Our view is that Brexit headwinds will increase in the next year, mainly driven by outflows from foreign investors.”