The wit and wisdom of Warren Buffett, ''Oracle of Omaha''

The weekend known as “Woodstock for Capitalists” is unique in corporate America, a celebration of Buffett`s success at a conglomerate whose businesses range from Geico insurance to the BNSF railroad to See’s candies to Ginsu knives. 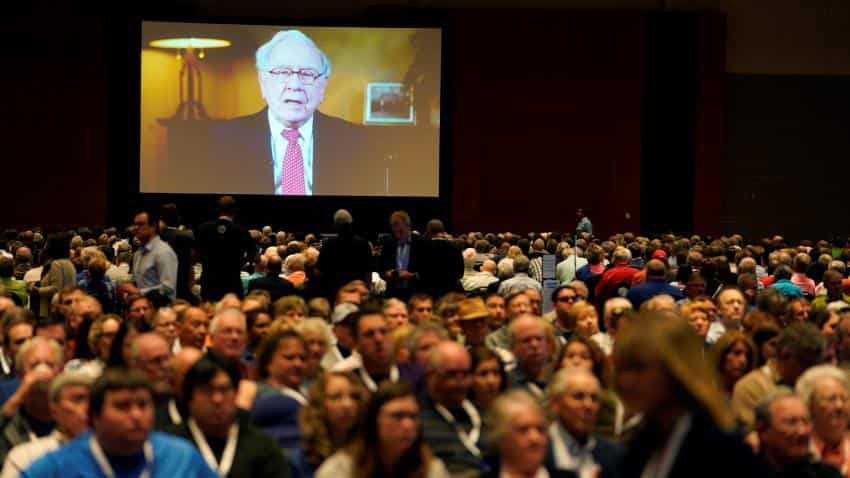 Warren Buffett, CEO of Berkshire Hathaway Inc is seen on a screen at the company''s annual meeting in Omaha. Photo: Reuters
Written By: Reuters
RELATED NEWS

The weekend known as “Woodstock for Capitalists” is unique in corporate America, a celebration of Buffett`s success at a conglomerate whose businesses range from Geico insurance to the BNSF railroad to See’s candies to Ginsu knives.

Below are the comments from Buffett, the “Oracle of Omaha,” on a wide range of investments and other topics:

ON LARGE ACQUISITIONS OUTSIDE THE UNITED STATES

"In terms of getting a lot of money into something, many billions ... that can be tougher in markets that you`re unfamiliar working in. Accumulating a $6 or $8 or $10 billion position outside the United States can be very difficult.

"Charlie keeps pushing me to do more in China."

ON AMAZON.COM AND ALPHABET

"We`ve certainly looked that them ... the truth is, I`ve watched Amazon from the start and what Jeff Bezos has done is something close to a miracle. If I think something is a miracle, I tend not to bet on it. Bill Gates told me early on (to look at) Google ...

"I made the wrong decision on Google and Amazon."

Munger: "I`ve been to Google headquarters - it looks like a kindergarten."

"American industry has gotten incredibly more profitable in aggregate in the last 20-30 years ... This has become somewhat an asset-light economy ... It is a changing world and (the biggest companies) will earn even more money with the tax rate going down."

"I`ve been on 19 boards, and I`ve never seen a board like ours ... It`s a group of owner-oriented, Berkshire-conscious, business-savvy owners ... People opt into it to a great deal."

"It`s extremely hard to find acquisitions that would be accretive to Apple (in) the $50-$100 billion range. As I look around the horizon, I don`t see anything that would make sense for them, whereas I do see a business that they know everything about ... I`m delighted to see them repurchasing shares ... Mentally, you can say we own 5 percent of it ... Over the passage of time, we may own 6 or 7 percent because they repurchase shares."

"We get a decent return on the capital-intensive businesses. We bought most at decent prices and they`ve been run very well."

No one except the Wall Street Journal, the New York Times and (now) the Washington Post has come up with a digital product that will in a significant way replace the revenue being lost as print newspapers lose cir and advertising ... the Journal, the Times and probably the Post have an economically viable model in the digital world."

"Where the daily newspaper was a primary (source of information), they`re no longer primary."

"This country really, really works ... this country has six times the per capita GDP growth that it had when I was born ... this is a remarkable, remarkable country ... I would love to be a baby born in the United States today."

ON CRYPTOCURRENCIES BEING A BUBBLE

"Wells Fargo is a company that proved the efficacy of incentives, and it`s just that they just had the wrong incentives ... The fact that you are going to have problems at some large institutions is not unique ... I see no reason why Wells Fargo as a company ... going forward is in any way inferior to the other big banks with which it competes. We have a large unrealized gain (in the stock). I like it as an investment. (The CEO) is correcting mistakes made by other people."

ON MEASURING EFFECT OF TAX CUTS

"It`s very, very difficult in economics to measure the impact of single variables. Every question you get in economics, you should then say, `And then what?`"

ON HEALTHCARE PARTNERSHIP WITH JPMORGAN AND AMAZON.COM

"We simply have three organizations with leaders I admire and trust ... We have a hugely non-competitive medical cost in American business relating to any country in the world ... The motivations are not primarily profit making. We want our employees to get better medical services at lower cost .... we know the resistance will be unbelievable, and if we fail - at least we tried. I think we`ll probably have a CEO within a couple of months."

"We probably could`ve extracted better terms. It might have been counterproductive in the end ... We could have made better purchases 3-4 months later. We didn`t push it to the limit."

ON USING CASH FOR A SPECIAL DIVIDEND

"We had a vote on whether people wanted a dividend ... the B-shares voted 47-1 against it. They expect us to do whatever we think makes sense for all shareholders, and if we thought we can`t use the money effectively in the business, we should get it out ... We won`t always be in a world of low interest rates or high private-market prices ... It`s very unlikely we`d pay out a big special dividend."

"The kind of risk that you can`t really look up in a book and see actuarially, I enjoy thinking through the pricing of that."

"Long-term bonds are a terrible investment at current rates, or anything close to current rates. Rates (on short-term bills) have gone up lately, so in 2018 my guess is we`ll have at least $500 million (more) in pre-tax income than we had last year."

"I do not worry about the slowing deal flow. My phone is not ringing off the hook with good deals but we will still be the first (point) of call, irrespective of me or Charlie not being there."

ON INVESTING IN GUN MANUFACTURERS

"I do not believe in imposing my political opinions on the activities of our businesses."

"The 3G people have gone into certain situations where there were probably ... A lot of expenses that were not delivering a dollar of value for a dollar expended. They made changes very fast to a situation that probably shouldn`t have existed in the first place."

"Our managers have different techniques of keeping track of trying to maximize customer satisfaction at the same time that they don`t incur other than necessary costs."

"The growth did slow down, but it’s not because we wanted it to. If you look at the first quarter, our margins were around 7 percent, which is actually a little more than we aimed for. The underwriting gains for margins are perfectly satisfactory now. And we’ve gained market share here and market share there. We will keep gaining market share.

"Geico is a jewel. It’s an incredible company. It’s saving its customers probably $4-5 billion a year against what they would be paying otherwise.”

BUFFETT: "We`ve seen steel costs increase somewhat. I don`t think either (the U.S. or China) will dig themselves into something that precipitates and continues any real trade war ... The benefits of trade are basically not visible. No one thinks about benefits day by day ... The negatives, and there are negatives, are very apparent and very painful."

MUNGER: "The conditions in steel were almost unbelievably adverse to the American steel industry. Even Donald Trump can be right on some of this stuff."

"In August, I will be 88, in a year that ends in an 8. Eight is a lucky number in China. ... The United States and China are going to be the two superpowers of the world, economically and in other ways for a long, long, long time. We have a lot of common interests and like any two big economic entities there are times when there will be tensions. But it is a win-win situation when the world trades."

ON BERKSHIRE IN 50 YEARS

"I think the reputation of Berkshire being a good home for companies ... I don`t think that`s dependent on me and Charlie."

"The answer is I don`t know, and I didn`t know what it would look like 50 years ago ... We will be as shareholder-oriented as any large company in the world. Who knows what will be happening then."

"Duracell should be earning more money than it is now ... The brand is strong, very strong, the product line is very strong ... From a profit standpoint, it`s underperforming."

"(McLane) is a very, very tight-margin business ... our competitors aren`t making much money either."

"It`s a very, very good business. Manufacturers are very dependent on both the quality of the parts and the promptness of the delivery. Reliability ... is enormously important. (Our) contracts extend out many years ... it`s an acquisition with very long tails. Mark Donegan is a fabulous manager, I wouldn’t have bought it without him in charge… it’s got very long tails to the products that are being developed."

MUNGER ON BUFFETT BEING `SEMI-RETIRED`

“He sits around reading most of the time and thinking, and every once in a while he talks on the phone. I can’t see any difference … Warren is very good at doing nothing."

Get Rs 500 for free? Do your LPG gas cylinder booking through Paytm | Indane, Bharat Gas to HP Gas, here's how to do it

'Rajinikanth's spiritual politics not against any religion'