Tensions subsided at the Group of Seven (G7) summit, which began on  Friday,  after criticisms and accusations between US President Donald Trump and Washington`s allies dampened moods. 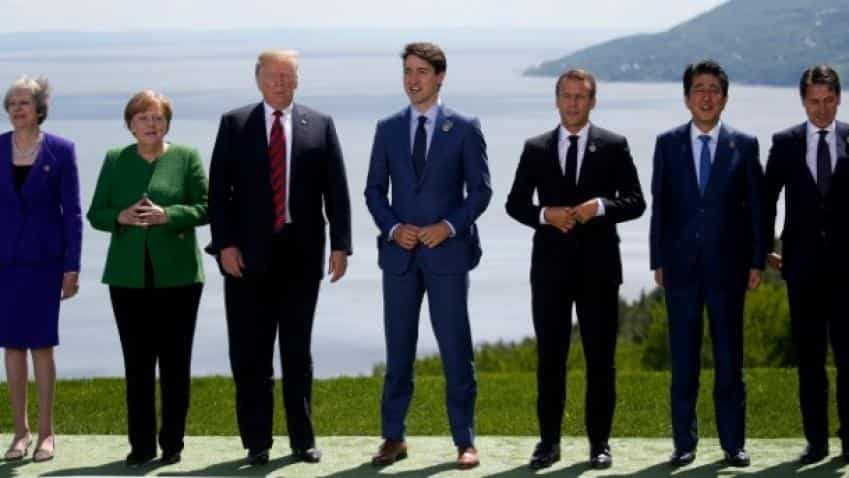 Tensions between French President Emmanuel Macron and Trump seemed to have subsided after having brief meeting at the start of the summit. Image source: IANS
Written By: IANS
RELATED NEWS

Tensions subsided at the Group of Seven (G7) summit, which began here on Friday, after criticisms and accusations between US President Donald Trump and Washington`s allies had dampened moods.  Tensions had started to subside during lunch, when there was a "relatively relaxed discussion". The lunch was attended by the heads of state of Germany, Canada, the US, France, Italy, Japan and the United Kingdom, as well as by European Council head Donald Tusk and the president of the European Commission, Jean-Claude Juncker, Efe reported.

The topics that were brought up during lunch -- economic outlooks and artificial intelligence -- are not the most controversial of the summit, as opposed to the issues of trade, climate change and Russia, which had caused tensions to rise. The more relaxed mood was clear during the traditional "family photo" that followed lunch.

The leaders appeared relaxed and were smiling and talking to one another in the gardens of Le Manoir Richelieu de La Malbaie hotel, 145 km northeast of Quebec City. After the family photo, German Chancellor Angela Merkel lagged behind to briefly talk with Trump. Tensions between French President Emmanuel Macron and Trump also seemed to have subsided after having brief meeting at the start of the summit.

Ahead of the summit, the two presidents had engaged in a Twitter spat, in which the French president suggested that a G6 agreement could be signed without the US, while Trump accused Macron and Canadian Prime Minister Justin Trudeau of "charging the US massive tariffs".