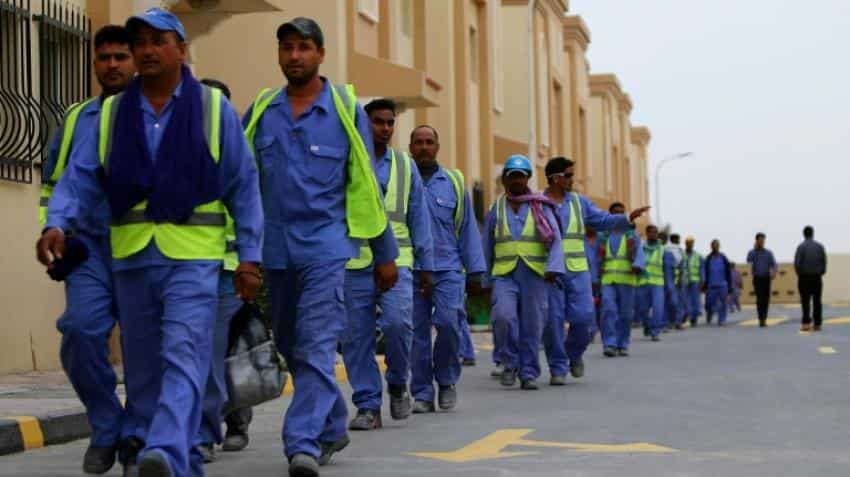 On Tuesday, the Gulf state is expected to announce the end of its controversial "kafala" sponsorship law, replacing it with a contract-based system for workers. Image Source: AFP

"I`ve heard about a change in the law, but what the change will be I don`t know," says Girijesh, an Indian electrician, during his hour-long lunch break in downtown Doha.

The "change" he is referring to is arguably the single biggest labour overhaul ever to be undertaken by Qatar.

On Tuesday, the Gulf state is expected to announce the end of its controversial "kafala" sponsorship law, replacing it with a contract-based system for workers.

Ever since Qatar was chosen to host the 2022 World Cup, its labour laws have been internationally condemned and kafala has been at the heart of that criticism.

The sponsorship system has been compared to modern-day slavery, and leaves vulnerable workers with little protection and open to abuse, say critics.

All foreign workers wanting to work in Qatar currently require a local sponsor, in the form of an individual or company, and also need their permission to switch jobs or leave the country.

Qatar has rejected criticism, and says the new system will make it easier for workers to leave the country or change employment as they will be able to deal directly with employers.

But what of the views of those on the front line, the labourers helping to build the infrastructure which the world will see in six years` time?

Girijesh is just one of hundreds of blue and yellow-overalled workers resting after a morning`s work in Mshereib, where an estimated $5.5 billion project to convert a rundown part of Doha into a gleaming financial and tourist centre is under way.

As Girijesh speaks, a crowd gathers, eager to voice their own concerns about working conditions.

Most concern pay -- either not receiving their monthly salary or only finding out once they were in Qatar that the money they were promised before leaving is a fraction of what they actually earn.

"My work is really hard and really dangerous as well, but I only earn 600 Qatari riyals a month," says Nazamudin, a Nepalese marble fitter.

He was promised double that amount before leaving home and paying more than $1,100 to get a visa into Qatar.

Similarly Ibrahim, an electrician from Bangladesh, says he receives a salary of 810 riyals, despite being promised 1,200 a month.

To compound matters he has not been paid for months.

What these workers say they want -- whether under a sponsorship or contract system -- is wage security.

"All labourers have a problem in Qatar," says Ibrahim, who has to pay off 30,000 Qatari riyals to an agent who helped him secure work in the Gulf.

"If the Qataris are implementing this new law, hopefully it will be better for us," he tells AFP through an interpreter.

"The main thing is the contract. My contract is my security and I need to be secure."

Scaffolder Saddulhaq from Bangladesh says labourers are exploited by unscrupulous agents, and not only over pay.

He says many cannot read, so they have no idea what they are signing up to, or even for the amount of time they will be in Qatar.

"We do not know how long we are going to work for," Saddulhaq says.

At its worst, the uncertainty over pay can lead to workers paying the ultimate price, says Amir, a Nepalese carpenter.

"Some months we don`t get paid. Your family is starving, your kids are starving, there`s no food at home... that`s why people choose suicide."

Asked how often colleagues take their own lives, Amir says there are cases every month.