The meeting in Singapore, the first between a sitting U.S. president and a North Korean leader, was in stark contrast to a flurry of North Korean nuclear and missile tests and angry exchanges of insults between Trump and Kim last year that fueled global worries about war. But in a joint statement afterward, the two men offered few specifics about the relationship would evolve. 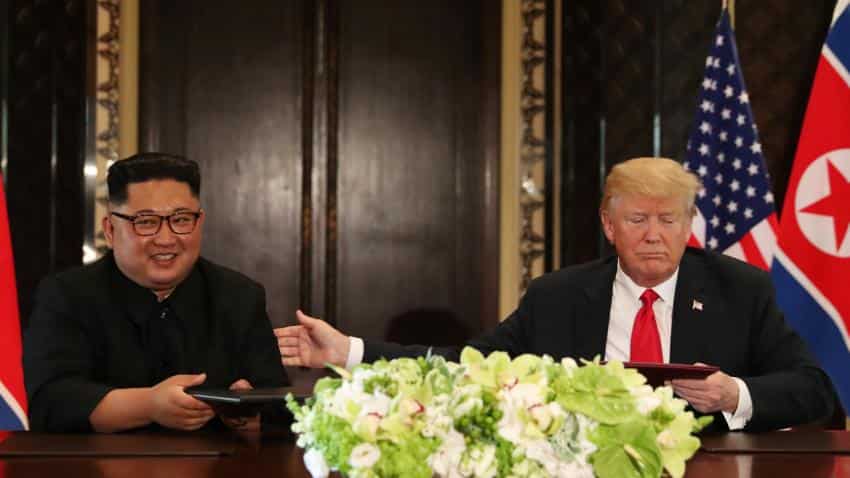 Donald Trump and North Korean leader Kim Jong Un held a largely symbolic summit on Tuesday, and the U.S. president offered an unexpected concession to the North, saying he would halt joint military exercises with South Korea. The two men smiled and shook hands before pledging at their historic summit to work toward the "denuclearisation" of the Korean Peninsula. The United States promised its Cold War foe security guarantees.

The meeting in Singapore, the first between a sitting U.S. president and a North Korean leader, was in stark contrast to a flurry of North Korean nuclear and missile tests and angry exchanges of insults between Trump and Kim last year that fueled global worries about war.

But in a joint statement afterward, the two men offered few specifics about the relationship would evolve.

Noting North Korean promises in the past to denuclearise, several analysts cast doubt on how effective Trump had been at obtaining his pre-summit goal of banishing North Korea`s "very substantial" nuclear arsenal.

At a news conference later, Trump made a surprise announcement that was sure to rattle South Korea and Japan, which rely on a U.S. security umbrella, saying he would halt the regular military exercises the United States holds with South Korea because they were expensive and "very provocative". North Korea has long sought an end to the exercises. [L4N1TE31E]

The summit gave international standing to Kim, one of the world`s most reclusive leaders. His government is under U.N. sanctions for its nuclear and ballistic missile programs.

The Trump administration said repeatedly before the summit that Washington was seeking steps by North Korea toward complete, verifiable and irreversible dismantling of a nuclear program that is advanced enough to pose a threat to the United States.

Several experts said the meeting failed to secure any concrete commitments by Pyongyang toward this. The statement also did not refer to human rights in one of the world`s most repressive nations.

Trump said at the news conference he expected the denuclearisation process to start "very, very quickly" and it would be verified by "having a lot of people in North Korea". He said Kim had announced that North Korea was destroying a major missile engine-testing site, but sanctions on North Korea would stay in place for now.

It was unclear if negotiations would lead to denuclearisation, or end with broken promises, as happened in the past, said Anthony Ruggiero, senior fellow at Washington`s Foundation for Defense of Democracies think tank.

"This looks like a restatement of where we left negotiations more than 10 years ago and not a major step forward," he said.

The joint statement, referring to North Korea by the initials of its official name, the Democratic People`s Republic of Korea, said "President Trump committed to provide security guarantees to the DPRK and Chairman Kim Jong Un reaffirmed his firm and unwavering commitment to complete denuclearisation of the Korean Peninsula".

Kim said after the summit he and Trump had "decided to leave the past behind. The world will see a major change."

Trump`s meeting with Kim, who he described in warm terms at the news conference, followed days of berating traditional U.S. allies such as Canada and Germany in trade disputes. He left a Group of Seven summit in Canada early last weekend, and described host Prime Minister Justin Trudeau as "very dishonest and weak."

Trump`s announcement that he would stop military exercises with old ally South Korea was a surprise even to the government in Seoul, which has worked over recent months to help bring about the Trump-Kim summit.

South Korea`s presidential Blue House said it needed "to find out the precise meaning or intentions" of Trump`s statement, while adding that it was willing to "explore various measures to help the talks move forward more smoothly".

Pentagon officials were not immediately able to provide any details about Trump’s remarks about suspending drills, something that the U.S. military has long resisted.

A spokeswoman for U.S. military forces in Korea said it had not received any direction to cease joint military drills.

"USFK has received no updated guidance on execution or cessation of training exercises - to include this fall`s schedule Ulchi Freedom Guardian," U.S. Forces in Korea spokeswoman Lieutenant Colonel Jennifer Lovett said in a statement.

"In coordination with our (South Korean) partners, we will continue with our current military posture until we receive updated guidance."

Trump and Kim appeared cautious and serious when they arrived for the summit at the Capella hotel on Singapore`s resort island of Sentosa.

Body language experts said they both tried to project command as they met, but also displayed signs of nerves. After a handshake, they were soon smiling and holding each other by the arm, before Trump guided Kim to a library where they met with only their interpreters.

North Korea has long rejected unilateral nuclear disarmament, instead referring to the denuclearisation of the peninsula. That has always been interpreted as a call for the United States to remove its "nuclear umbrella" protecting South Korea and Japan.

The leaders` statement made no mention of the sanctions on North Korea and nor was there any reference to a peace treaty that would formally end the 1950-53 Korean War, which killed millions of people and ended in a truce.

But the document did say the two sides had agreed to recover the remains of prisoners of war and soldiers missing in action, so they could be repatriated.

Daniel Russel, formerly the State Department`s top Asia diplomat under the Obama administration, said the absence of any reference to the North`s ballistic missiles was "glaring."

"Trading our defence of South Korea for a promise is a lopsided deal that past presidents could have made but passed on," he said.

Trump said China, North Korea`s main ally, would welcome the progress he and Kim had made.

China, which has opposed North Korea`s nuclear ambitions, said it hoped North Korea and the United States could reach a basic consensus on denuclearisation.

"At the same time, there needs to be a peace mechanism for the peninsula to resolve North Korea`s reasonable security concerns," China`s top diplomat, state councillor Wang Yi, told reporters in Beijing.

If the summit does lead to a lasting detente, it could fundamentally change the security landscape of Northeast Asia, just as former U.S. President Richard Nixon`s visit to China in 1972 led to the transformation of China.

"There is no concrete detail on the denuclearisation of the Korean peninsula and the provision of security guarantees by the United States," Li said. "It is too early to call it a turning point in North Korea-U.S. relations."

World stocks slipped on Tuesday and the dollar retreated from a three-week high after the summit.

Trump said he had formed a "very special bond" with Kim and relations with North Korea would be very different in future. He called Kim "very smart" and a "very worthy, very hard negotiator".

Just a few months ago, Kim was an international pariah accused of ordering the killing of his uncle, a half-brother and hundreds of officials suspected of disloyalty. Tens of thousands of North Koreans are imprisoned in labour camps.

Trump said he raised the issue of human rights with Kim, and he believed the North Korean leader wanted to "do the right thing".

Trump also said U.S. college student Otto Warmbier did not die in vain, as his death helped initiate the process that led to the summit. Warmbier died last year, days after he returned to the United States in a coma after being released from North Korean custody.

During a post-lunch stroll through the gardens of the hotel where the summit was held, Trump said the meeting had gone "better than anybody could have expected".

Kim stood silently alongside, but he had earlier described the summit as a "a good prelude to peace".

Trump also rolled out what amounted to a promotional video starring the two leaders before the talks, which was watched by the North Korean officials on an iPad.

Within North Korea, the summit is likely to go down well.

"Signing the joint statement would show North Korean citizens that Kim Jong Un is not a leader just within North Korea but also in international society, especially with his position equivalent to Trump," said Ahn Chan-il, a defector from North Korea who lives in the South.