At a grand ceremony held in Beijing's imposing Great Hall of the People, telecast live across China, Xi praised the Chinese people's "hard work, wisdom and courage" and listed its achievements since late leader Deng Xiaoping launched the era of "Reform and Opening" in 1978. 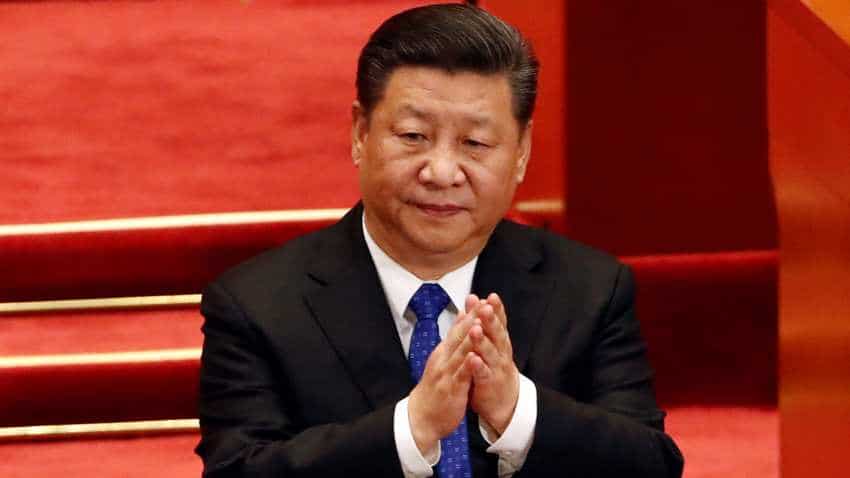 "No one is in a position to dictate to the Chinese people what should or should not be done," Xi asserted. Image source: Reuters
Written By: PTI
RELATED NEWS

No one can "dictate" to China on what it should do or what it should not, President Xi Jinping asserted Tuesday as the Communist giant celebrated the 40th anniversary of its reform and opening-up policies that have transformed it from an impoverished country into a economic powerhouse.

But Xi's speech lasting over 80 minutes did not offer any indication of relaxation of the ruling Communist party's firm grip on political power or concrete policies to tackle China's complex economic problems like slower growth and an ongoing trade war with the United States.

President Donald Trump has demanded further reforms to the Chinese economy, including greater access for US companies and a clampdown on intellectual property theft. Xi's speech comes during a 90-day truce between Washington and Beijing while the two sides try to reach a compromise.

At a grand ceremony held in Beijing's imposing Great Hall of the People, telecast live across China, Xi praised the Chinese people's "hard work, wisdom and courage" and listed its achievements since late leader Deng Xiaoping launched the era of "Reform and Opening" in 1978.

China's economy will produce "miracles that will impress the world" in the coming years, the 65-year-old top leader said while noting that there is no textbook of golden rules to follow for reform and development in China, a country with over 5,000 years of civilisation and more than 1.3 billion people.

"No one is in a position to dictate to the Chinese people what should or should not be done," he asserted amidst growing pressure from the Trump administration on Beijing on several fronts, including on trade and the Chinese military flexing its muscles in the strategic Indo-Pacific region.

"(We must) oppose the practices of imposing one's will upon others, interfering in others' internal affairs or the strong bullying the weak," he said.

China is "increasingly approaching the centre of the world stage," he said and noted that the country pursues a defensive national defence policy.

"China's development does not pose a threat to any country. No matter how far China develops, it will never seek hegemony," the Chinese president assured jittery neighbours who are worried over Beijing's growing economic clout.

China's militarisation of islands in the South China Sea - home to vital shipping lanes - has sparked concerns among Asian neighbours that it seeks to dominate the region.

The reform and opening-up is a great revolution in the history of the Chinese people and the Chinese nation, he said. "It is the great revolution that propelled a quantum leap forward in the cause of socialism with Chinese characteristics," Xi, also General Secretary of the Communist Party and Chairman of the Central Military Commission, said.

Xi is widely seen as China's most influential leader since Mao. In 2017, he cemented his power, enshrining his political views in the Constitution.

China's economic reform was initiated by Deng in 1978 and the programme was ratified on 18 December that year.
The reform path turned the country away from the old style communism of 'Chairman' Mao Zedong when collectivisation had led to an impoverished and inefficient economy.

Today, China holds about 10 per cent of global wealth. China now has 600 billionaires, a higher number than anywhere else in the world.

Xi described the reforms pioneered by Deng and the ruling party as a "break from the shackles" of previous mistakes. He noted that China has lifted 740 million people out of poverty in the 40 years.

"The country has maintained its social stability over a long period, making it one of the countries that provide the greatest sense of safety in the world," Xi said.

China has bid farewell to the problems that plagued its people for thousands of years, including hunger, shortage and poverty, he said.

China's development has effectively served the cause of world peace and development, Xi said.

The reform and opening-up in the past four decades has shown, a major country like China cannot afford any disruptive mistake on fundamental issues, he said.

Xi's speech will have "disappointed" both international and local investors, said Tom Rafferty, a China expert at the Economist Intelligence Unit.

"There's a lot of anxiety about near-term economic growth and trade talks with the United States ... It was a bit of a missed opportunity for (Xi) to at least offer something in that direction," he was quoted as saying by CNN.

In his speech, Xi stressed on the leadership of the ruling Communist Party of China in all sectors.

The reform and opening-up in the past four decades has shown that leadership of the Party is the most essential attribute of socialism with Chinese characteristics, and the greatest strength of this system, Xi said.

Despite the economic reforms, the past decades have not brought change to China's rigid one-party system of communist rule.

"The Party must guide the overall situation...And see that China's ship of reform and opening up will break waves and sail on the right course," Xi said.

Before Xi spoke, the Communist Party honored 100 people for their special contribution to "Reform and Opening" including prominent technology entrepreneurs like Alibaba's Jack Ma and Tencent's Ma Huateng.