Myanmar to delay law that would have allowed more foreign investment

The postponement of the corporate reform, which would have allowed foreign companies to take up to a 35 percent stake in Myanmar companies, will likely deal a fresh blow to investor confidence in Suu Kyi`s administration. 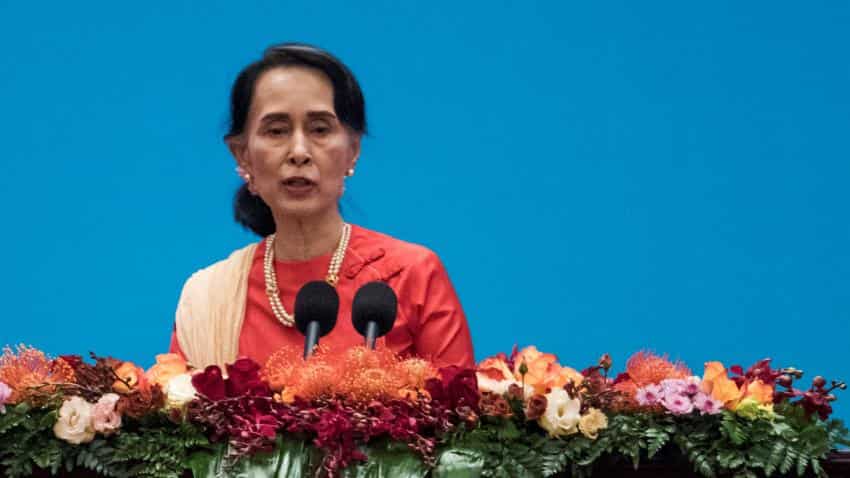 China at it again! To build new wall that is 2000-km long along this border; expansionist thinking to the fore, says US think tank

Myanmar will delay a long-awaited reform that would open the door further to foreign investment, two officials told Reuters, a move likely to disappoint cash-starved businesses amid growing doubts over the management of the economy by the country`s leader, Aung San Suu Kyi.

The postponement of the corporate reform, which would have allowed foreign companies to take up to a 35 percent stake in Myanmar companies, will likely deal a fresh blow to investor confidence in Suu Kyi`s administration.

Economic reform is a key goal for her to complete Myanmar`s democratic transition after decades of isolation under military rule.

The delay underscores the daunting challenge facing Suu Kyi, whose promise of a reformist government that would attract foreign investment is under threat.

Some aid to Myanmar is already being withheld and investors are concerned that the sanctions that long hobbled the country`s economy will be reinstated over its treatment of its Rohingya minority.

A Myanmar companies law, which could bring much-needed foreign capital to the country after decades of mismanagement by the former military junta, was approved last week by President Htin Kyaw without a commencement date specified.

Aung Naing Oo, head of Myanmar`s Directorate of Investment and Company Administration (DICA), told Reuters the authorities may not be ready to implement the new rules until as late as August 2018, after bylaws were prepared and a company registry that he said was vital to enforcement was completed.

"We really want to implement the law as soon as possible but there are many things for us to do," he said, declining to elaborate what bylaws were needed. He said the government would make sure implementation would be no later than August 1. "We have to make sure the reform is on the right track."

Myo Min, director of DICA, said the authorities needed up to eight months to "work on the guidance and operating manual" for the country`s first modern online registry, an initiative driven by the Asian Development Bank to electronically revamp the country`s company registry to boost transparency.

The law includes a first set of modern corporate governance regulations, in some parts replacing rules made over a century ago, to bring the country`s business regulatory framework closer to international standards.

At issue is a clause that allows foreigners to take up to a 35 percent share in local companies, which would give local businesses access to a larger capital pool and open up the door for mergers and acquisitions in sectors that are in urgent need of an injection of cash from banking to property.

The delay of the much-anticipated reform comes as Suu Kyi faces criticism that she has neglected economic reforms. Growth in both foreign investment and gross domestic product have slowed since her National League for Democracy took office last year in one of the region`s poorest countries.

Htay Aung, president of the property-to-trading conglomerate Sakura Trade Center, said putting off implementation of the law "was bad for business as it will bring delays and extra costs, which result in losses".

The company is seeking $100 million in over­seas financing for a condominium development in Myanmar`s commercial hub, Yangon. "Foreign investment will be postponed and local businessmen will be disappointed."
"MISSED OPPORTUNITY"

Investors have been waiting for the corporate reform, which was initiated by the former military-backed government in 2014. It establishes guidelines on how a company is run and governed, removing outdated rules on share transfers and offering greater protection to shareholders.

But Chris Hughes, a lawyer with Berwin Leighton Paisner in Yangon who was commissioned to draft the rules, said it was a "missed opportunity" for Suu Kyi`s administration.

"I can`t see a compelling economic reason or policy behind the delay. It seems more driven by technology or administrative factors."

William Greenlee, managing director at law firm DFDL in Yangon, said the business community would struggle with the delay.

"International investors are watching and it`s wins like this that create a buzz and can materialize into a profound and sustained increase in foreign investment," he said. "The euphoria will quickly turn to disappointment if it`s not implemented quickly."

Aung Naing Oo of DICA said there would be no negative impact on investment. "Investors always need to take some time before they invest," he said. "So this actually is the time for investors to make preparation to invest in Myanmar."

The Asian Development Bank, which gives financial and technical assistance to Myanmar, said "it is ultimately the government`s decision when the law comes into force" and declined to comment further.

China at it again! To build new wall that is 2000-km long along this border; expansionist thinking to the fore, says US think tank