Investors, who were fully pricing in a rate rise at the ECB`s June 2019 meeting as recently as early May, now see only a slim chance of such a move over that time horizon. 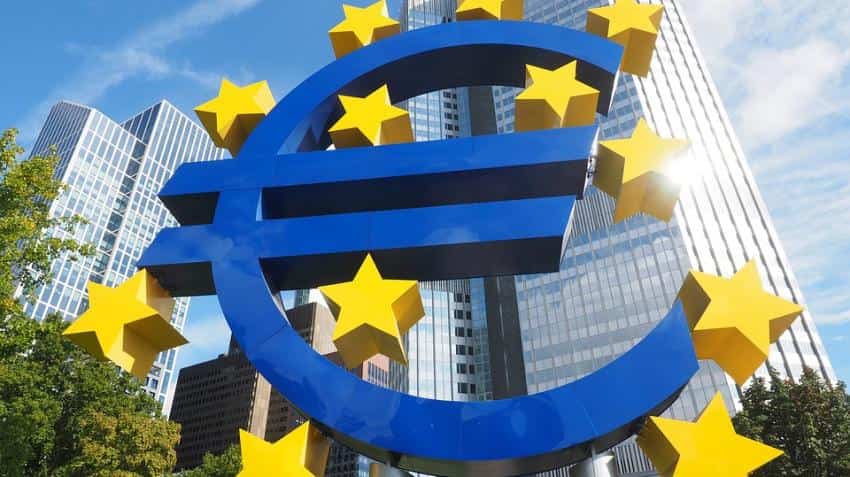 Euro zone money markets no longer expect the European Central Bank to raise interest rates in the next 12 months and have pushed rate hike expectations out to October 2019 from June 2019 as economic growth slows and Italy`s political crisis worsens.

Investors, who were fully pricing in a rate rise at the ECB`s June 2019 meeting as recently as early May, now see only a slim chance of such a move over that time horizon.

They`ve pushed back expectations for the ECB`s first rate hike of this cycle to later in the year, with a 10-basis-point increase now only fully discounted by the October 2019 meeting.

A deepening political crisis in Italy, the euro zone`s third-biggest economy, fuelled a heavy selloff in Italian assets and the euro on Tuesday, in a throwback to the euro debt crisis of 2010-2012.

That turmoil comes on top of signs that the euro zone economy may have lost further momentum at the start of the second quarter, prompting markets to cast doubt over both the timing and scale of monetary tightening.

"There is just one 10-basis-point hike priced in for next year now, which is quite a sharp re-pricing of market expectations," said Frederik Ducrozet, senior economist Europe at Pictet Wealth Management.

"The ECB could still end QE (quantitative easing) in December. In a way, the market is doing its job for it by pushing back rate-hike expectations."

The difference between the overnight bank-to-bank interest rate for the euro zone (Eonia) and forward Eonia rates dated for the ECB`s June 2019 meeting stood at 3 basis points, down from around 6 bps last week and 9 bps earlier this month..

That indicates investors are pricing in roughly a 30 percent chance of a 10-basis-point increase - the minimum likely rise - in the ECB`s minus 0.4 percent deposit rate.

The ECB`s massive bond-buying scheme is scheduled to end in September. Many economists expect the central bank to conclude it by the end of the year, followed by a roughly six-month gap before interest rates are raised. But market pricing now suggests a rate rise could come much later.

Indeed, the turnaround in rate expectations has been significant. This year started with markets pricing in a hike this December, given strong data and hawkish comments from some policymakers. Earlier this month, they had priced in almost three 10 bps rises for 2019.

But growing concern about Italy and softer data have prompted a shift.

JPMorgan said last week it had pushed back its rate hike expectations from March 2019 to June 2019.

For some analysts, current market pricing risks getting ahead of itself.

"We think the ECB will be pragmatic and adopt policy according to economic circumstances at the time," said Sarah Hewin, chief economist for Europe at Standard Chartered.

"Chances are by then we will have a new Italian government with the chance to implement some of its policies. We can`t say at this point that a June 2019 (hike) is definitely out."