Speaking after a joint government meeting at which a raft of economic cooperation agreements between German and Chinese companies were signed, Merkel also praised China for opening up its markets to further foreign investment. 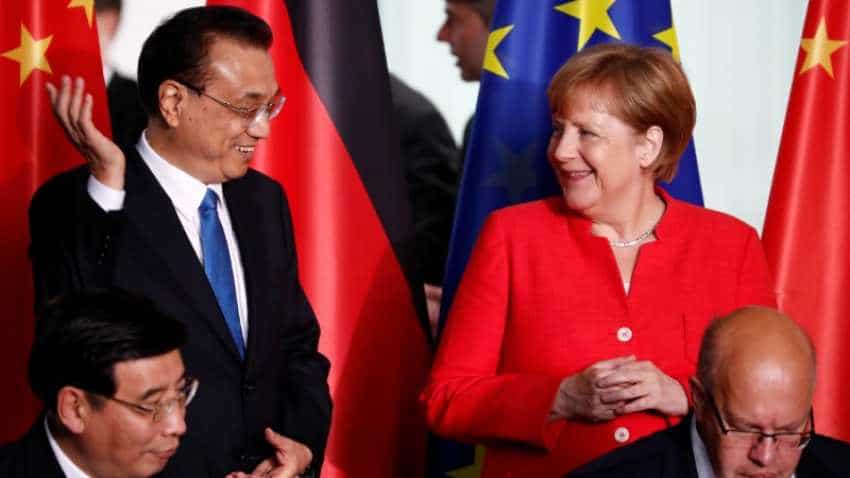 German economy escapes recession by the narrowest of margins

Germany and China are both committed to multilateralism and a rules-based global trade order, German Chancellor Angela Merkel said at a joint news conference with Chinese Prime Minister Li Keqiang on Monday. Speaking after a joint government meeting at which a raft of economic cooperation agreements between German and Chinese companies were signed, Merkel also praised China for opening up its markets to further foreign investment.

"We both want to sustain the system of World Trade Organisation rules," she said. "But we also discussed market access - you could call it reciprocity," she added, reflecting widespread concern among European officials that Chinese firms find it easier to invest in Europe than vice versa.

Both exporting powerhouses stand to lose from a looming trade conflict with the United States.

Frankfurt: German companies signed a raft of agreements with Chinese partners at a meeting of Chinese Prime Minister Li Keqiang and German Chancellor Angela Merkel in Berlin on Monday, according to a document seen by Reuters. Following are details of contracts signed:

BASF
BASF signed a Memorandum of Understanding with Guangdong Province to investigate the possibility of building a highly-integrated "Verbund" chemical production site there, BASF said.
The site would be BASF`s largest investment and would be operated under its sole responsibility, it said.
The investment is estimated to reach up to $10 billion by completion of the project around 2030, it added.

BMW
BMW and its joint venture partner Brilliance Automotive Group Holdings have agreed to expand production capacity at BMW Brilliance Automotive`s (BBA) two sites in China to a total 520,000 BMW brand vehicles in 2019, BMW said.
In addition, it said the two companies had agreed that the all-electric BMW iX3, to be produced by BBA from 2020, would be exported from China to other markets.

SIEMENS
Siemens and Alibaba Cloud, the cloud computing arm of Alibaba Group, signed a Memorandum of Understanding to partner to foster the industrial Internet of Things (IoT) in China, Siemens said.
Under the MoU, both companies will begin collaborating immediately and intend to make the MindSphere platform on Alibaba Cloud available in 2019, it said.

German economy escapes recession by the narrowest of margins