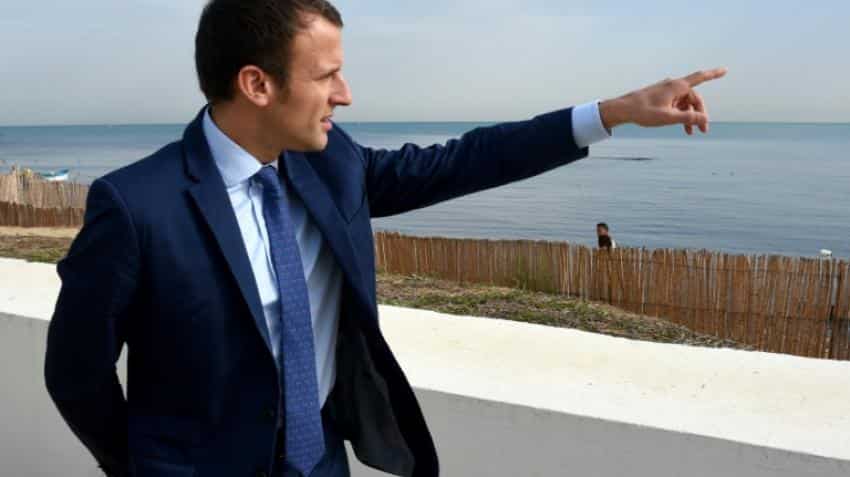 Macron finally ended speculation about his intentions by announcing his candidacy for his "En Marche" centrist party from a training centre in a gritty suburb northeast of Paris. Image Source: AFP
Written By: AFP

French ex-economy minister Emmanuel Macron, a 38-year-old political novice, announced his bid for the presidency on Wednesday, as an alternative to the "same men and same ideas" that have guided France for decades.

Macron finally ended speculation about his intentions by announcing his candidacy for his "En Marche" ("On the Move") centrist party from a training centre in a gritty suburb northeast of Paris.

Never elected and "neither of the left or the right" in his own words, the pro-business and technology-savvy former investment banker is hoping to shake up a race between older, more familiar figures.

"I`m ready, that`s why I am candidate for the French presidency," he said, promising a "democratic revolution" that would restore France`s optimism and self-confidence.

The centre-right Republicans party is tipped to win the two-stage election in April and May, but some analysts are questioning their assumptions after Donald Trump`s stunning upset in the United States.

The far-right National Front under leader Marine Le Pen, who announced her election campaign logo Wednesday, is seeking to capitalise on a surge in nationalism and anti-globalisation.

Macron, who quit the beleaguered Socialist government in August to focus on his own political movement, is expected to steal centrist voters from the Republicans and the left.

A poll Tuesday showed him as one of France`s most "presidential" figures behind the favourite Alain Juppe, a 71-year-old former prime minister from the Republicans who has one of the longest CVs in French politics.

Macron by contrast has a meagre two years in government as a sometimes rebellious economy minister from 2014-2016 and time as an advisor to his former mentor President Francois Hollande.

"I believe that the French people won`t put their destiny in the hands of someone with no experience," former prime minister and another Republicans candidate, Francois Fillon, said Wednesday morning.

Leftist Socialist rival Arnaud Montebourg dismissed Macron as the "media`s candidate who has been on 75 magazine front pages despite never having proposed anything."

But Macron believes his youth and inexperience are assets in a country weary of a political class blamed for years of tepid growth, high unemployment and mounting government debt.

"We have entered a new era," Macron said Wednesday referring to the dangers of global warming, terrorism, rising inequality and a crisis for Western democracies.

"We can`t respond with the same men and the same ideas," he added.

President Hollande, who is yet to announce whether he will try to defy his disastrous ratings in next year`s election, is reportedly furious at what he sees as betrayal by his one-time protegee.

Hollande called Tuesday for "cohesion" and "uniting" amid disarray in the Socialist party.

Macron quit the government in August saying he had "seen at first hand the limits of our political system" and that he wanted to be free to push his own agenda.

That agenda is left-wing on social issues, where he wants to focus on employment in deprived areas, but also pro-business, with Macron a vocal critic of France`s strict labour laws.

A maverick in politics as well as in his private life, Macron is married to his former school teacher, a divorcee with three children who is some 20 years his senior.

Applauded by liberals for criticising some of the key planks of French socialism, the former Rothschild banker and self-made millionaire is criticised by leftists as being too cosy with business and finance.

His name is on the first of two economic reform packages that were forced through parliament without a vote under Hollande.

Both sparked angry street protests and created a deep divide within the Socialist Party.