Indian-American Gita Gopinath, the first woman to be appointed as the IMF chief economist, faces a "tough landscape", her outgoing predecessor has said, exuding confidence that she would successfully meet the challenges in the coming years. 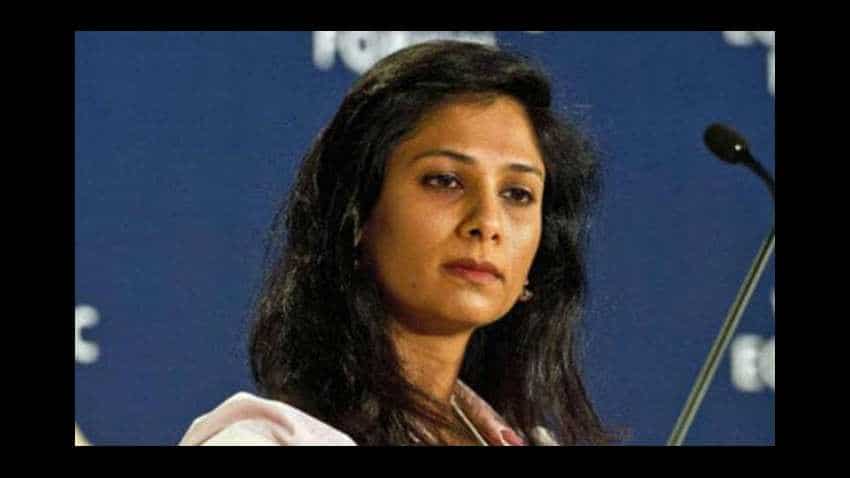 Indian-American Gita Gopinath, the first woman to be appointed as the IMF chief economist, faces a "tough landscape", her outgoing predecessor has said, exuding confidence that she would successfully meet the challenges in the coming years.

Preparing to leave the International Monetary Fund (IMF) in the next few weeks, IMF Chief Economist Maury Obstfeld told a group of journalists that his successor is going to face a series of frontline issues including the ongoing trade tensions, climate change, some kind of a cyber event, and income distribution.

The 46-year-old economist, who will assume the office in January, is the second Indian to be appointed to the role of chief economist after Raghuram Rajan.

Having personally known Gopinath for nearly two decades now, Obstfeld asserted that the new chief economist would successfully come out with solutions to the problems that he is leaving behind.

"I think she's going to be a fantastic appointment," said Obstfeld, who is now headed to the University of California, Berkley to return to his passion of teaching and research.

"I've actually known her since roughly 1996 or 1997. Ken Rogoff and I did a graduate textbook in international macroeconomics back then and very last thing we did in the book was the publisher said, 'you need problems at the end of the chapters for the graduate students to solve', he said.

When they finished the book, the publishers IMPF press asked them to write some problems, which they did. And once book was out, the publisher came to them and said that they need to do a solution manual for the problems.

"We kind of said, oh, how are we going to do that? We don't even know if we can solve these problems. And Kevin said, well, I have a this really smart graduate student and she can help us do this," Obstfeld said, recollecting the conversation he had some two decades ago.

"I asked, what's her name? He said Gita Gopinath," Obstfeld told reporters, adding that Gopinath then worked on the solutions manual. "She was great. I'm not surprised that she went on to an illustrious, illustrious career," Obstfeld said.

Responding to a question as to what has changed in the last three years, the period he has been the IMF's chief economist, he said Gopinath is going to face a world that looks a little different from the one he came into.

"When I showed up, the big challenge was China seem to be slowing, how is it handling its exchange rate? But Europe had come through the euro crisis US growth, you know, 2015 was a pretty good year, so things didn't look bad, he said.

"Then in sharp succession you have Brexit, you have the troubles in Europe that we've been discussing. You have, the US moving to a very different view of the international order that in some sense has increased policy uncertainty a lot in the global economy. And so this is going to be a tough landscape to navigate, I think," Obstfeld felt.

The IMF, he said, has started looking at a lot of issues that are very important in understanding these changes, including income distribution, market power, trade, the effects of trade, the tensions that trade has caused.

"These are the ongoing themes and I'm sure new themes are gonna come up," he said, adding that climate change is another major challenge facing the global economy.

"We're really in an increasingly worrisome situation. We were going to see more and more macro effects coming from climate change, extreme weather events whatever you want to call it, he said.

"The other really big issue, which is just sort of hanging out there waiting to happen, is some major cyber event with cascading network effects that could actually have major financial and macro-economic consequences, Obstfeld said.

"It's one of these public goods problems because if you, as a firm or a financial institution, are attacked and have to shut down your systems, that's a big financial loss for you. But there are important network effects that affect the whole economy, he said.

"So your economic theory tells you that the private sector is not doing enough here, that logically speaking, they're not taking account of all the externalities," he said.

The governments really need to step in and they need to raise the alarm and the IMF as an international organisation have to focus on the spillovers between countries and people are talking about it more, he said, adding that the threat is not being taken seriously enough yet.

"Those are going to be frontline issues for Gita in the next few years," Obstfeld said.