If French automaker Renault green-lights a proposed merger with Fiat Chrysler Automobiles, the companies almost immediately could begin saving money by consolidating components and basic structures on many of their most popular vehicles, an industry analyst said on Tuesday. 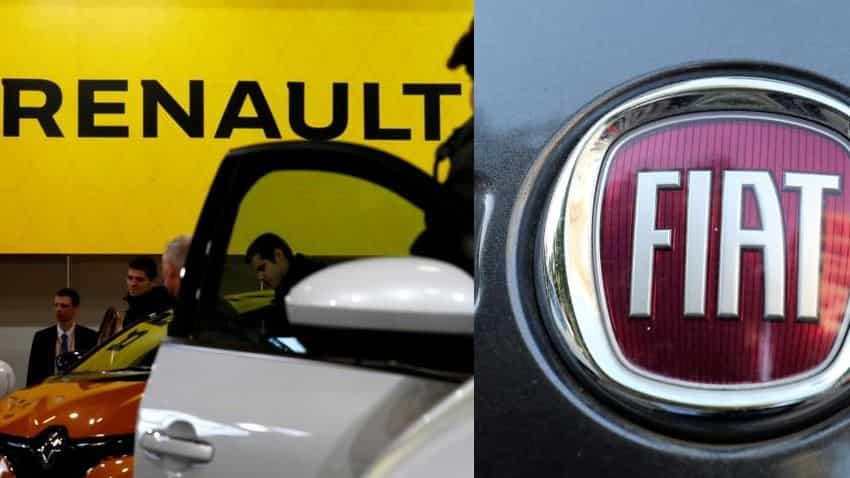 If French automaker Renault green-lights a proposed merger with Fiat Chrysler Automobiles, the companies almost immediately could begin saving money by consolidating components and basic structures on many of their most popular vehicles, an industry analyst said on Tuesday. The synergies could multiply if they invite Japanese automaker Nissan Motor Co, currently Renault`s alliance partner, to join the merger, according to a former Renault and Nissan executive.

Renault and Italian-American rival Fiat Chrysler Automobiles are in talks to tackle the costs of far-reaching technological and regulatory changes by creating the world`s third-biggest automaker. A Renault-Fiat Chrysler combination "would mean a greater sharing of parts (which) could really boost the profitability of Fiat Chrysler`s smaller vehicles," said Sam Fiorani, vice president, AutoForecast Solutions.

Building similar models on a common vehicle architecture, Fiorani said, "would give both companies a lot more freedom in manufacturing. They could mix brands and vehicle sizes on the same assembly line, switch vehicles between plants to balance production, and even shift production from one country to another, depending on changes in demand, tariffs or other considerations."

Fiorani said Fiat Chrysler could benefit from sharing the French automaker`s expertise in electric vehicles and powertrains, where Renault and Nissan have jointly invested more than $5 billion. These are areas in which Fiat Chrysler has little in the way of components or intellectual property.

Another sector that is ripe for consolidation is light commercial vehicles, where Renault and Fiat Chrysler could build a variety of vans in several sizes on common platforms that could be assembled and sold in global markets.  Ford Motor Co and Volkswagen AG began their alliance discussions a year ago by focusing on potential collaboration in light commercial vehicles.

GETTING NISSAN`S BLESSING
Fiorani said Renault`s CMF architecture, which was jointly developed with Nissan and underpins many of Renault`s passenger cars and crossovers, could be used by Fiat Chrysler on a wide variety of vehicles. As an example, he said the CMF could provide a new foundation for at least five Jeep models, including the Renegade, Compass and Cherokee, which now are based on four different platforms.

A hurdle to implementing the merger is all the intellectual property - including the CMF vehicle architecture - that is shared between Renault and Nissan, said Patrick Pelata, a veteran of the two automakers` alliance who was formerly Renault`s chief operating officer. "They will need Nissan’s agreement for it to be used by Fiat Chrysler,” Pelata told BFM radio on Tuesday. “Nobody’s talking about that right now, but it’s an important subject.”

Renault would not likely be interested in sharing Fiat Chrysler`s body-on-frame platforms, which underpin the automaker`s big pickups and SUVs in North America, Fiorani said. "But if Nissan is invited to join the merger, that could open up new possibilities," he said. "Nissan could use Fiat Chrysler`s full-size truck platform for its next-generation Titan and Armada, while Fiat Chrysler could use Nissan`s mid-size truck platform for the next-generation Dakota and Durango."

Fiorani said it likely would take at least two years after a Renault-Fiat Chrysler merger is approved before the arrival of the first new vehicles built on shared architectures.