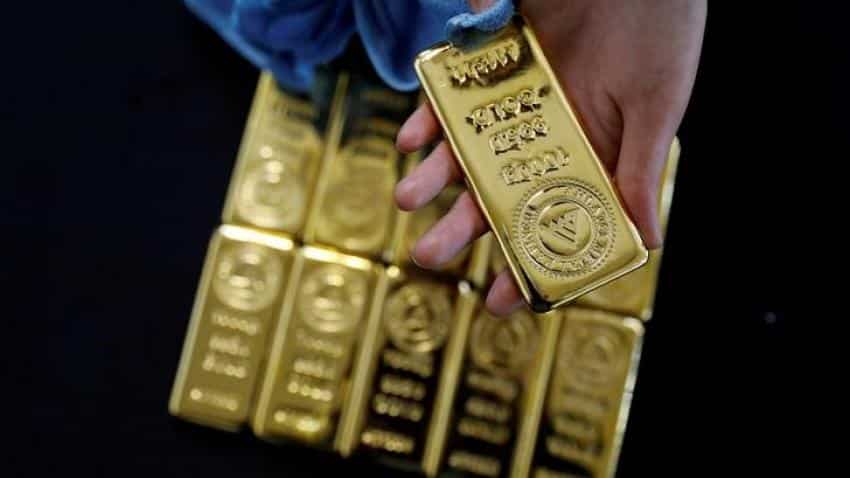 Gold eased from an earlier 3-1/2 month high on Wednesday and was on track for its first day of losses in nearly three weeks as a firmer tone to the dollar pressured assets priced in the U.S. currency.

The dollar`s late December retreat drove gold sharply higher over the same period, leading to fears that the metal was becoming overbought.  Spot gold was down 0.3 percent at $1,314.03 an ounce at 1040 GMT, off an earlier peak of $1,321.33, while U.S. gold futures for February delivery were down 80 cents an ounce at $1,315.30. "It`s still the dollar which is still very much in the driving seat for gold," Julius Baer analyst Carsten Menke said. "We`re bearish on the euro versus the U.S. dollar, so if that materialises, and this close relationship holds between gold and the dollar, it should move towards $1,225 or so."

The dollar rose 0.3 percent versus the euro in early trade, though it remained near a four-month low after declining nearly 3 percent in the last three weeks.  Investors are awaiting manufacturing data and minutes of a December U.S. Federal Reserve meeting due later in the day, which will be closely watched for clues on the outlook for U.S. monetary policy.
Gold, which as a non-yielding asset is highly sensitive to rising interest rates, fell in the run-up to the third U.S. interest rate hike of 2017 in December, but quickly recovered, climbing 5 percent from its mid-month low to the year`s close.
Spot gold`s 14-day relative strength index (RSI) touched 75 on Tuesday, it highest since September 2017. An RSI above 70 indicates a commodity is overbought and could herald a price correction, technical analysts say.

"Relative strength index shows the metal at overbought levels, which may lead to short-term selling," ScotiaMocatta analysts said in a research note. Among other precious metals, palladium was down 1 percent at $1,080.99 an ounce, after hitting a record high on Tuesday at $1,096.50. The metal soared 56 percent in 2017 due to fears that strong demand from carmakers, which use the metal in catalytic converters, chiefly in gasoline-powered vehicles, would tighten the market further after years of deficit.

"Palladium has more than doubled as compared with its multi-year low in mid-January 2016," Commerzbank said in a note. "This precious metal is presumably being driven further up by concerns of ongoing shortages... the diesel scandal is still playing its part in this, as it has generated high demand for cars with gasoline engines."