Gold prices rose on Tuesday and were hovering close to their highest in more than a week touched in the previous session as the dollar eased on weak U.S. economic data, with the metal gaining further support from higher oil prices. 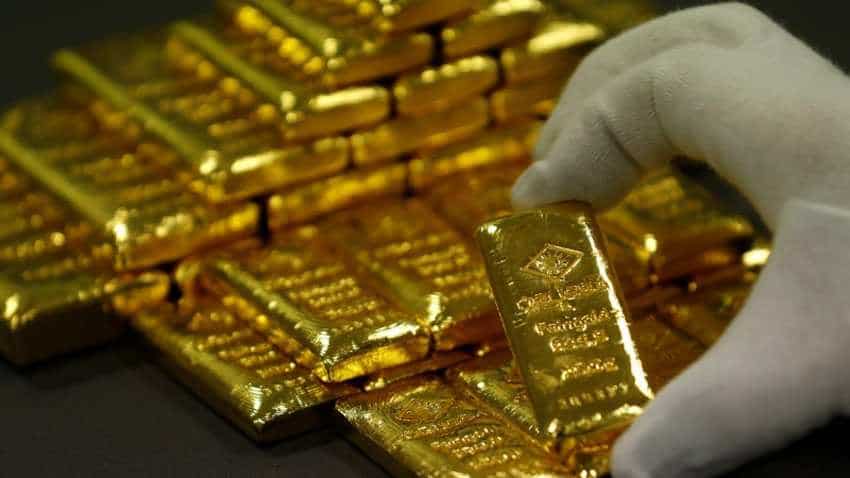 Gold prices rose on Tuesday and were hovering close to their highest in more than a week touched in the previous session. Reuters

Gold prices rose on Tuesday and were hovering close to their highest in more than a week touched in the previous session as the dollar eased on weak U.S. economic data, with the metal gaining further support from higher oil prices. Spot gold was up 0.3 percent at $1,300.47 per ounce, as of 0753 GMT. The metal touched an intra-day high of $1,303.61, highest since March 28, in the previous session. U.S. gold futures were up 0.1 percent at $1,303 an ounce. "The dollar is not able to sustain above the 97 levels and gold is also getting support from rising crude oil prices," said Renisha Chainani, head of commodity and currency research at Monarch Networth Capital in Ahmedabad, India.

"A rise in crude oil prices leads to speculation that inflation will rise and gold is considered as a hedge against inflation. So, when crude oil prices rise, gold will rise." Oil prices rose to their strongest level since last November. The dollar sagged to a level last seen on March 28, thanks to weak U.S. economic data and gains in commodity-linked currencies, which drew support from an extended surge in crude oil prices. Orders for U.S.-made goods fell modestly in February and the manufacturing sector is slowing amid rising inventories, data showed on Monday.

The U.S. nonfarm payrolls data on Friday also signaled a slowdown in wage growth and job cuts in the manufacturing sector even as employment accelerated. "Decline in wage inflation takes the pressure off the U.S. Federal Reserve and lets it remain dovish and delay rate hikes or maybe switch gears, and that`s supportive for gold," said Ilya Spivak, a senior currency strategist at DailyFX. Lower interest rates reduce the opportunity cost of holding the non-yielding bullion. Investors are now awaiting minutes of the Fed`s March meeting, due on Wednesday.

"There is an expectation for a dovish-biased statement based on what came out in March. The larger issue is how concerned are our policymakers over the state of global economy," Spivak said.  Gold is also supported by continued buying from central banks, ANZ analyst Daniel Hynes said.

China, the world`s biggest gold consumer, raised its gold reserves by 0.6 percent to 60.62 million ounces by end-March, central bank data showed. Meanwhile, holdings in the world`s largest gold-backed exchange-traded fund, SPDR Gold Trust, fell for a sixth straight session to 760.49 tonnes on Monday. Among other precious metals, spot platinum slipped 0.2 percent to $903.13 per ounce, after touching its highest since end-May 2018 in the previous session. Palladium was up 0.2 percent at $1,386.10 an ounce, while silver gained 0.1 percent at $15.25 per ounce.