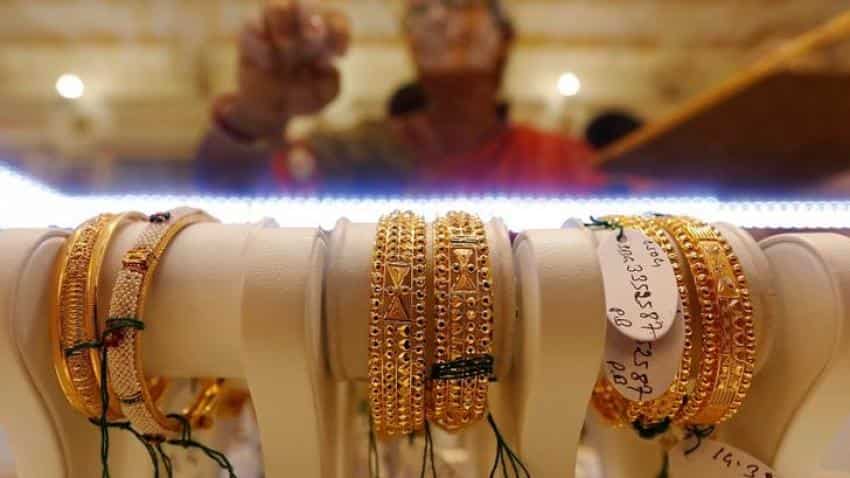 Gold bangles are on display as a woman makes choices at a jewellery showroom during Dhanteras, a Hindu festival associated with Lakshmi, the goddess of wealth, in Kolkata, India. Image Source: Reuters
Written By: Reuters
RELATED NEWS

Gold prices scaled a two-week peak on Monday as the dollar slumped to a six-week low after a G20 weekend summit that was dominated by the U.S. administration`s protectionist stance on global trade.

The precious metal has been rising since last Wednesday, when the dollar dropped after the U.S. Federal Reserve raised interest rates but stopped short of predicting a sharper acceleration in monetary tightening over the next two years.

Gold is highly sensitive to falling interest rates, which decrease the opportunity cost of holding non-yielding bullion while weighing on the dollar, in which it is priced. A weaker dollar also increases the buying power of non-U.S. investors.

"Overall the geopolitical outlook still points to several hotspots ... and we`re not going to see a focus on rate rises for the foreseeable future now, because that`s out the way. Over the next few weeks one has to favour the upside," said Ole Hanson, head of commodity strategy at Saxo Bank.

Gold has rebounded more than $35 from the low hit before the Fed policy announcement last Wednesday, while the dollar has fallen 1.7 % from its high of 101.71 the same day.

"The dovish outlook ... following last Wednesday’s Fed meeting is clearly still having an impact. This is likely to lure a number of speculative financial investors back into gold after this group massively reduced their net long positions in the run-up to the meeting," Commerzbank said in a note.

Spot gold is expected to test resistance at $1,237, a break above which could lead to gains to $1,243, Reuters technical analyst Wang Tao said.