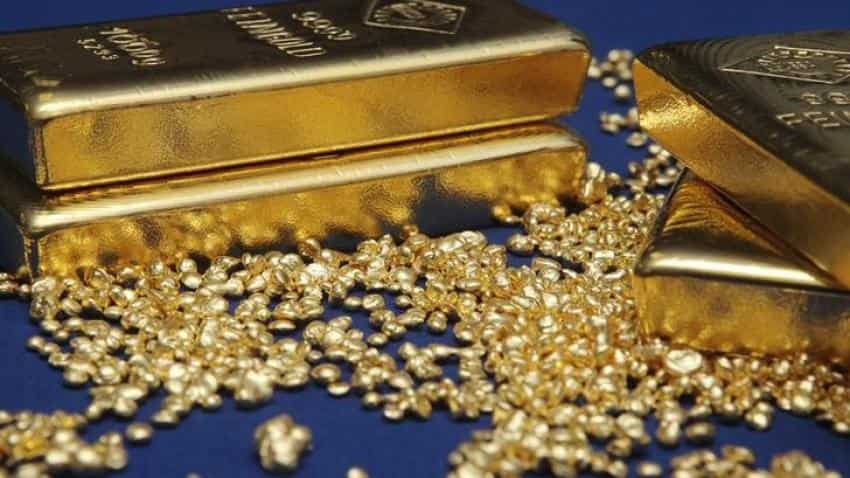 Gold prices hit their lowest in a week on Wednesday as the dollar steadied after a recovery from last week`s three-year low, while investors awaited the minutes of the U.S. Federal Reserve`s last policy meeting for clues on the pace of interest rate hikes this year.

"The return of China will be closely watched for any renewed physical interest in Asia to stem the weakness."

Treasury yields rose overnight with the benchmark 10-year yield crawling back to near a four-year peak as investors made room for this week`s $258 billion deluge of new government debt.

Treasury yields have risen in the wake of increased government borrowing. The U.S. Treasury Department has issued more debt in anticipation of a higher deficit from last year`s major tax overhaul and a budget deal that will increase federal spending over the next two years.

Higher yields on bonds make gold a less attractive investment because it pays no interest.

Investors are looking forward to the minutes of the Fed`s Jan. 30-31 policy meeting for any signs of a hawkish tone.

"A quicker and steeper slope of interest rate normalisation offers the most prominent near-term threat to gold prices as this outcome will send the U.S. dollar surging," said Stephen Innes, APAC trading head at OANDA.

Spot gold may drop to $1,316 per ounce as it has broken a support at $1,335, according to Reuters technical analyst Wang Tao.

"Interest around $1,325 will be the key for price direction in the coming days, weeks, as a sustained move through this level should extend toward $1,303-$1,310," Laughlin said.

Meanwhile, holdings at the SPDR Gold Trust, the world`s largest gold-backed exchange-traded fund, rose 0.39 percent to 827.79 tonnes on Tuesday from 824.54 tonnes on Friday.