Gold slid to a near five-month low on Monday, as the dollar rose and demand for safe-haven assets eased after U.S. Treasury Secretary Steven Mnuchin said a trade war between China and the United States was "on hold". 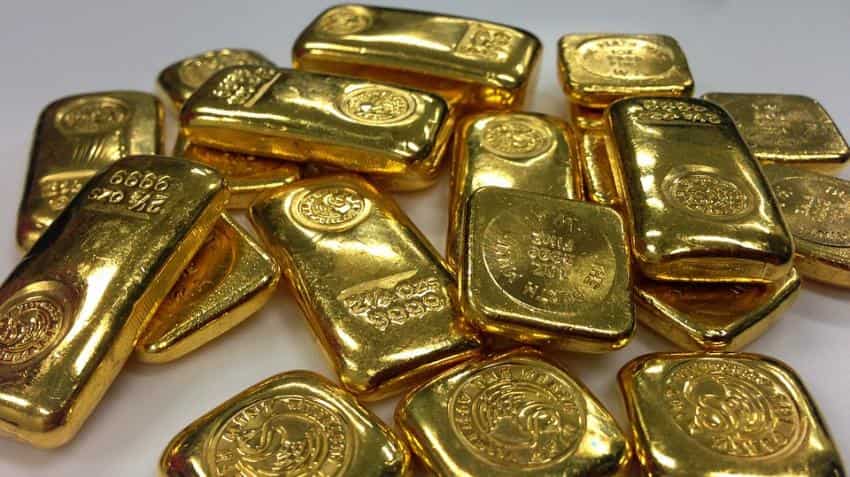 Gold slid to a near five-month low on Monday, as the dollar rose and demand for safe-haven assets eased after U.S. Treasury Secretary Steven Mnuchin said a trade war between China and the United States was "on hold". Spot gold was down 0.6 percent at $1,283.30 per ounce at 0658 GMT, after earlier hitting $1,281.76, its lowest since Dec. 27.

U.S. gold futures for June delivery were 0.7 percent lower at $1,282.50. "Gold price is under pressure as the dollar maintains its strength," said Naeem Aslam, chief markets analyst at Think Markets.

"`On Hold` is a risk-on term...The absence of trade tariffs and hostile tone between the two countries has also impacted the gold price more adversely," Aslam said.

The dollar rose versus the yen and hit a five month-high against a basket of currencies, after Mnuchin`s comments downplaying a trade dispute with China, boosting risk sentiment amid hopes for an easing of trade tensions between the world`s two biggest economies.

Chinese state media on Monday praised a significant dialing back of trade tension with the U.S., saying China had stood its ground and the two countries had huge potential for win-win business cooperation.

"You have this combination of technical factors which is at the moment un-supportive (for gold). As long as the dollar is on the firm side, gold is under pressure," said Dominic Schnider at UBS Wealth Management in Hong Kong.

The price of gold fell below the psychologically important $1,300 per ounce level last week for the first time since late December and has since continued to trade below its 200-day moving average.

"Investors are looking towards the biggest event of this week- the FOMC minutes and if the Fed doesn`t tame its hawkish stance, we would expect more weakness in the gold price," Aslam said.

Hedge funds and money managers cut their net long position in COMEX gold contracts by 21,294 contracts to 31,327 in the week to May 15, data showed on Friday.

Gold logs best week since May as inflation fears grow