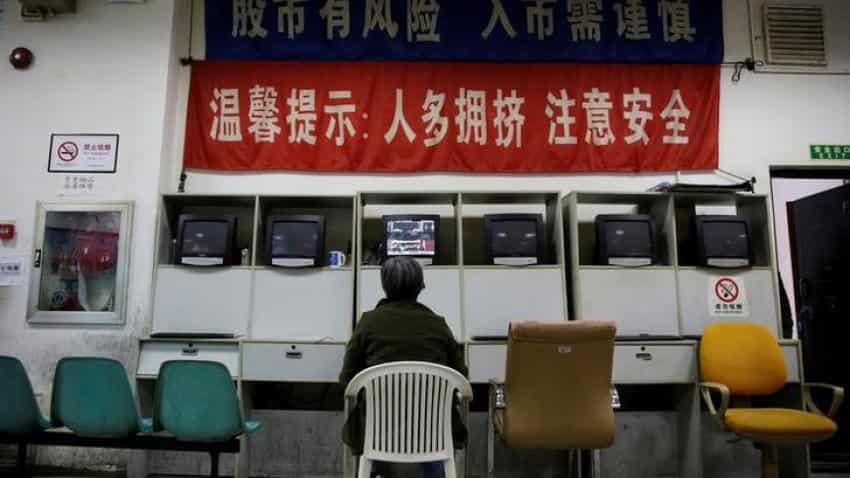 An investor looks at a screen showing stock information at a brokerage house in Shanghai. Image Source: Reuters
Written By: Reuters
RELATED NEWS

A renewed slump in oil prices to seven-month lows put Asian investors on edge on Wednesday, overshadowing a decision by U.S. index provider MSCI to add mainland Chinese stocks to one of its popular benchmarks.

The spread between yields on U.S. five-year notes and 30-year bonds shrank to the smallest since 2007 as investors wagered the Federal Reserve might have to delay further rate hikes.

Oil had shed 2 % on Tuesday as increased supply from several key producers overshadowed high compliance by OPEC and non-OPEC producers on a deal to cut global output.

The drop took U.S. crude down 20 % from its recent high and thus into official bear territory, a red flag to investors who follow technical trends.

The acceptance of some Chinese A shares into MSCI`s Emerging Markets Index was seen as a symbolic win for Beijing after three failed attempts. Yet the step is still a small one.

Only 222 stocks are being included and, with a weighing of just 5 %, they will account for only 0.73 % of the Emerging Markets Index.

MSCI estimated the change, which does not happen until June next year, would drive inflows of between $17 billion and $18 billion. China`s market cap is roughly $7 trillion.

The index provider set out a laundry list of liberalisation requirements before it would consider further expansion.

"We suspect that it will be a long time before this happens," wrote analysts at Capital Economics in a note.

"While China`s weighting in the MSCI Emerging Markets Index may ultimately rise to 40 % or so, this rise is likely to be slow," they added. "The upshot is that any initial boost to equities is likely to be small."

The initial reaction was indeed restrained, with China`s CSI300 index up 0.1 %.

MSCI also said it would consult on adding Saudi Arabia to the benchmark and that Nigeria will remain a frontier market, But it shocked many emerging market investors by failing to upgrade Argentina from the frontier market category.

In currency markets, the flight from oil benefited the U.S. dollar -- the two often move inversely. Against a basket of currencies, it was holding at 97.746 having touched a five-week peak overnight.

Sterling was nursing losses at $1.2626. It took a spill after Bank of England Governor Mark Carney hosed down speculation that he might soon back higher interest rates, saying he first wanted to see how the economy coped with Brexit talks.