Asian share markets began the week on a cautious note after soft economic data from China and Europe added to evidence of cooling global growth and reinforced anxiety over the broadening impact of international trade frictions. 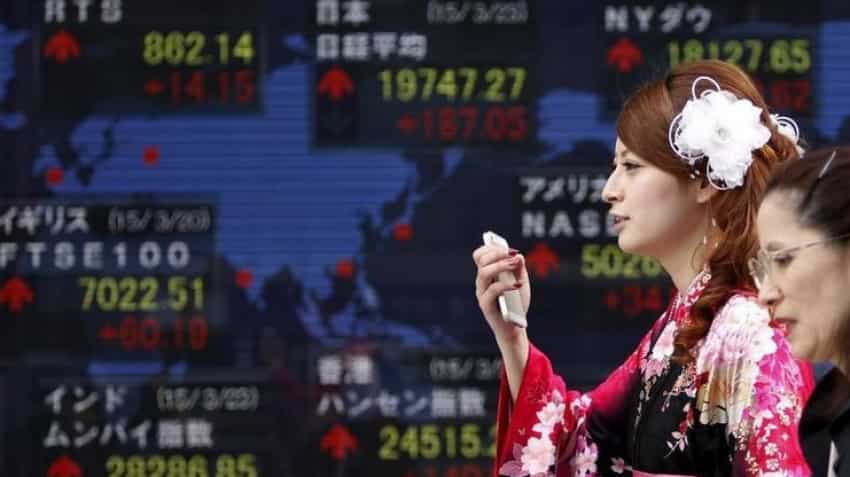 Asian share markets began the week on a cautious note after soft economic data from China and Europe added to evidence of cooling global growth and reinforced anxiety over the broadening impact of international trade frictions. MSCI`s broadest index of Asia-Pacific shares outside Japan dipped 0.1 percent in early Monday trade, led by losses in China and Hong Kong. The CSI 300 of Shanghai and Shenzhen share index dropped 0.9 percent

Other markets showed some resilience. Japan`s Nikkei was up 0.5 percent while U.S. stock futures ticked up 0.2 percent. Taiwan also gained 0.3 percent. On Wall Street on Friday, the S&P 500 lost 1.91 percent to 2,599.95, marking its lowest close since April 2.

The benchmark has dropped 11.3 percent from its Sept. 20 record close - the worst performance since it fell more than 14 percent between May 2015 and January 2016. The biggest drag was Johnson & Johnson, which tumbled 10 percent for its biggest drop since 2002, after Reuters reported that the pharma major knew its baby powder was contaminated with cancer-causing asbestos.

The market`s retreat also reflected a worsening global economic outlook, with the latest evidence of slackening momentum coming from China and Europe. IHS Markit`s Flash Composite Purchasing Managers` Index slumped to 51.3, its weakest since November 2014, from a final November reading of 52.7. That was well below even the most pessimistic forecast in a Reuters poll where the median expectation was for a modest rise to 52.8.

The survey showed euro zone businesses ended the year in a gloomy mood, expanding their operations at the slowest pace in over four years as new orders growth all but dried up, hurt by trade tensions and violent protests in France. The discouraging economic news came after China reported a batch of soft indicators, with retail sales growing at their weakest pace since 2003 and industrial output rising the least in nearly three years.

China`s economy has been losing momentum in recent quarters as a multi-year government campaign to curb shadow lending put increasing financial strains on companies in a blow to production and investment. Investors are now looking to a major speech by President Xi Jinping on Tuesday to mark the 40th anniversary of China`s reform and opening up.

In the currency market, the dollar held firm after having touched a 19-month high against a basket of six other major rivals on Friday as the U.S. economy appeared to be in better shape than others. U.S. retail sales excluding automobiles, gasoline, building materials and food services rose 0.9 percent last month after an upwardly revised 0.7 percent increase in October.

Against that backdrop, the U.S. Federal Reserve is seen as almost certain to raise interest rates at its two-day policy meeting starting on Tuesday, further enhancing the dollar`s yield attraction. At the same time, many market players also expect the Fed to lower its projections for future interest rate hikes given increasing headwinds to the economy.

"You could argue that if the Fed lower estimates, that could be taken as a further sign of economic slowdown," said Hirokazu Kabeya, chief global strategist at Daiwa Securities. "But given the fragile market sentiment, I would think it would be more dangerous if the Fed sticks to the view that it would raise rates three times next year."

The euro traded at $1.1307, having fallen to $1.1270 on Friday, its lowest level since Nov. 28. Sterling hovered near its 20-month low touched last week, as concerns grew that Britain was headed for a chaotic exit from the European Union.

With just over 100 days until Britain leaves the bloc on March 29, Brexit remains up in the air with growing calls for a no-deal exit, a potentially disorderly divorce that business fears would be highly damaging, or for a second referendum. The pound traded at $1.2580, about a cent above Wednesday`s low of $1.2477.  The yen was little moved at 113.48 per dollar.

The biggest mover was the Mexican peso, which gained after Mexico`s new leftist government avoided major surprises in its closely watched first budget, sticking to fiscal promises made earlier to investors. The peso rose 0.8 percent to 20.094 on the dollar, edging near a key resistance of 20.
Oil prices licked wounds after Friday`s falls on concerns about the global economy.