North Korea`s foreign minister said on Monday that a weekend tweet by President Donald Trump counted as a declaration of war on North Korea and that Pyongyang reserved the right to take countermeasures, including shooting down U.S. bombers even if they are not in its air space. 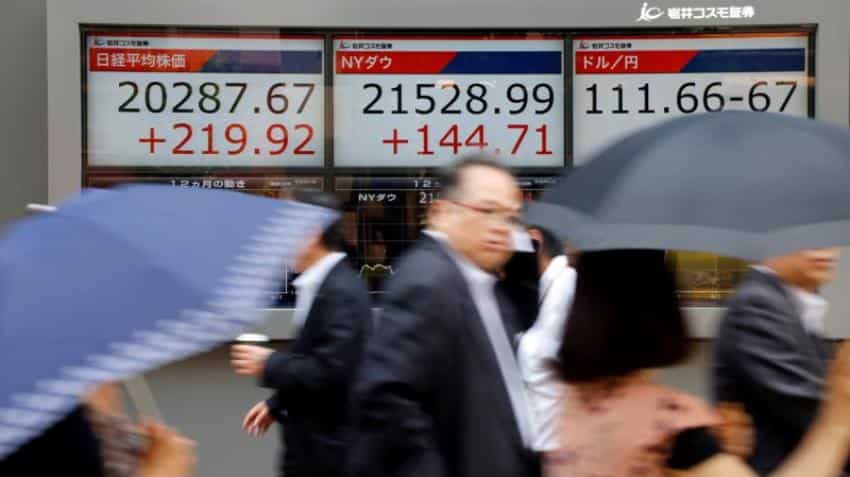 People walk past an electronic board outside a brokerage. Photo: Reuters
Written By: Reuters
RELATED NEWS

Asian shares slumped on Tuesday while the dollar remained off recent highs against the yen against the backdrop of rising tensions on the Korean Peninsula.

North Korea`s foreign minister said on Monday that a weekend tweet by President Donald Trump counted as a declaration of war on North Korea and that Pyongyang reserved the right to take countermeasures, including shooting down U.S. bombers even if they are not in its air space.

MSCI`s broadest index of Asia-Pacific shares outside Japan was down 0.2% in early trade, following losses on Wall Street.

Apple Inc shed 0.9% on Monday after it was reported the company had told suppliers to scale back shipments of parts for its upcoming iPhone X.

The yen tends to benefit during times of risk aversion due to Japan`s net creditor status and the expectation that Japanese investors would repatriate assets when facing a crisis.

The euro edged up after tumbling on Monday following a severely diminished election victory for German Chancellor Angela Merkel that was accompanied by a surge in support for the far right. Support for Merkel`s conservatives unexpectedly slumped to its lowest since 1949 and the Social Democrats, partners in the outgoing coalition, said they would go into opposition.

Later on Tuesday, Federal Reserve Chair Janet Yellen is scheduled to speak on "Prospects for Growth: Reassessing the Fundamentals" at 1645 GMT.

On Monday, New York Fed President William Dudley said the U.S. central bank is on track to gradually raise rates given factors depressing inflation are "fading" and the U.S. economy`s fundamentals are sound.

But Chicago Fed President Charles Evans said the Fed should wait until there are clear signs of faster wage and price growth before hiking rates again.

Crude oil prices gave back some of their gains after soaring more than 3% on Monday, with Brent hitting its highest in more than two years. Major producers said the global market was on its way to rebalancing, while Turkey threatened to cut oil flows from Iraq`s Kurdistan region to its ports. [O/R]