Oil prices slid just over 4  percent  overnight, bringing Brent`s losses since its October top to 37  percent . And the dollar suffered its biggest one-day drop on the yen since November 2017 as investors stampeded to safe havens. 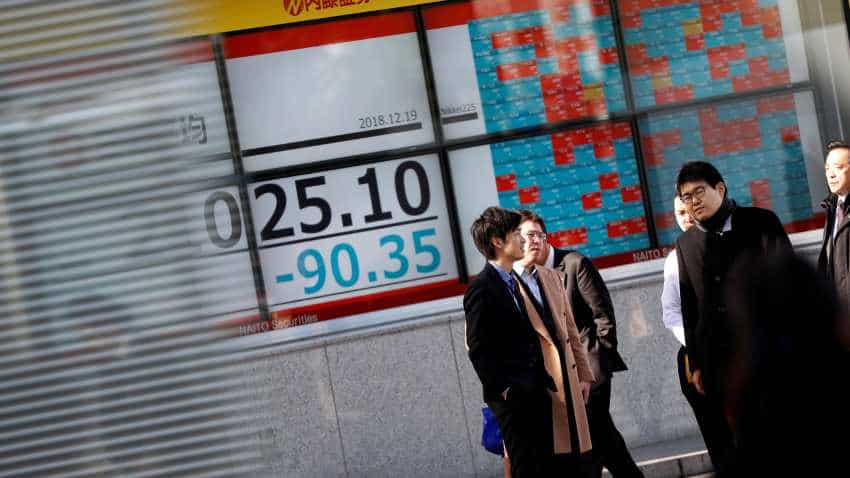 Global stocks were sailing into Christmas on a sea of red on Friday as the threat of a U.S. government shutdown and of further hikes in U.S. borrowing costs inflamed investor unease over the economic outlook, Image source: Reuters
Written By: Reuters
RELATED NEWS

Global stocks were sailing into Christmas on a sea of red on Friday as the threat of a U.S. government shutdown and of further hikes in U.S. borrowing costs inflamed investor unease over the economic outlook.

The S&P 500 was heading for its worst quarter since the dark days of late 2008, with a loss of 15 percent so far. The Nasdaq has shed 19.5 percent from its August peak, just shy of confirming a bear market.

Oil prices slid just over 4 percent overnight, bringing Brent`s losses since its October top to 37 percent. And the dollar suffered its biggest one-day drop on the yen since November 2017 as investors stampeded to safe havens.

"Negative momentum is a key factor in driving investor behaviour. Fundamental justifications are following the action," said McCarthy. "The selling will finish when it is done."

Early Friday, E-Mini futures for the S&P 500 were off another 0.25 percent, while MSCI`s broadest index of Asia-Pacific shares outside Japan went flat.

The Nikkei had already hit a 15-month low on Thursday when the U.S. Federal Reserve largely retained plans to increase interest rates despite mounting risks to growth.

Markets were further spooked when U.S. President Donald Trump refused to sign legislation to fund the U.S. government unless he got money for a border wall, thus risking a partial federal shutdown on Saturday.

"Friday will be a tense day in Washington, and for financial markets, as a last-minute compromise is sought."

Adding to the air of crisis was news U.S. Defense Secretary Jim Mattis had resigned after Trump proposed withdrawing troops from Syria and sources said a military pullback from Afghanistan was on the cards.

STAMPEDE FOR THE EXITS

The sea change in sentiment has triggered a rush out of crowded trades, including massive long positions in U.S. equities and the dollar and short positions in Treasuries.

Lipper data out Thursday showed investors pulled nearly $34.6 billion out of stock funds in the latest week and were heading for the biggest month of net withdrawals on record.

There was also a sense of capitulation in currency markets as the dollar dived 1.1 percent on the yen on Thursday to hit a three-month trough at 110.80 . It was last changing hands at 111.14 having shattered several layers of chart support.

The euro had jumped to its highest in over six weeks at $1.1485 , before steadying at $1.1459. Against a basket of currencies, the dollar sagged to 96.394 after suffering its largest single-session fall in two months.

The Swedish crown was a big gainer after its central bank on Thursday raised interest rates for the first time in more than seven years.

The flight from risk was a boon to sovereign bonds, where U.S. 10-year yields struck their lowest since early April at 2.748 percent. As recently as October, they had been at a seven-year top of 3.261 percent.

The gap between two- and 10-year yields shrank to just 9 basis points at one stage, the kind of flattening that has heralded recessions in the past.

The rally in longer-dated paper has been fuelled by the huge slide in oil prices, which will pile downward pressure on inflation at a time when the global economy was already slowing.

Both Brent and U.S. crude futures reached their lowest in more than a year overnight amid a glut of supply. U.S. crude eked out a 46 cent bounce in Asia on Friday to $46.33 a barrel, while Brent was yet to trade at $54.70.

Going the other way was gold, as the precious metal benefited form the sharp reversal in the dollar to stand at $1,262.11 an ounce.