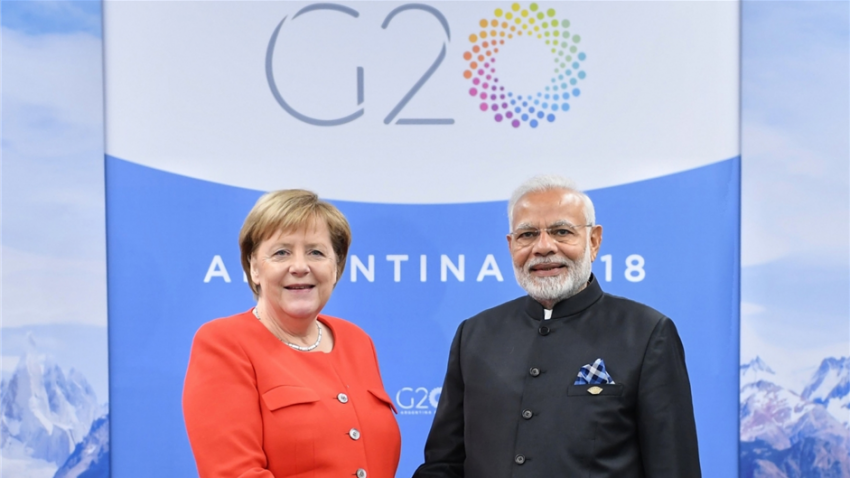 Prime Minister Narendra Modi on Saturday met a host of world leaders, including German Chancellor Angela Merkel and French President Emmanuel Macron, and held discussions on bilateral issues. On the last day of his visit to the Argentinian capital, he also met the President of the host country, Mauricio Macri, President of European Commission Jean Claude Juncker and President of European Union Donald Tusk.

The Indian Prime Minister met South African President Cyril Ramaphosa, the Prime Minister of the Netherlands Mark Rutte and President of Spain Sanchez Castejon on the sidelines of G20 summit. Modi described the discussions as productive and said these were meant to strengthen bilateral relations. "The talks revolved around enhancing friendship between India and the European Union," Modi said in a tweet.

Spokesperson for the Ministry of External Affairs Raveesh Kumar said the discussions were on cooperation in agriculture, food processing, space, defence, oil and gas, and civil nuclear energy. The Prime Minister had a "productive meeting" with French President Macron on the margins of G20 meeting. Both leaders discussed common front against terrorist financing and cooperation in maritime security, renewable energy and reform of international institutions.

After meeting with the German Chancellor Angela Merkel on the sidelines of the G-20 summit, Modi exchanged views on importance of multilateralism in a rapidly changing world and also underlined the need to strengthen cooperation in countering terrorism.

"Met Chancellor Merkel at Buenos Aires. We reviewed the full range of relations between India and Germany. Our countries are cooperating extensively for the benefit of our citizens and working together towards world peace as well as stability," he said in a tweet.

The Prime Minister in his meeting with Prime Minister of Jamaica, Andrew Holness, disussed a range of bilateral relations including development partnership, renewable energy and climate change.

Jamaica represents the Caribbean Community at G20. In his meeting with the Netherlands Mark Rutte, Modi invited him to participate in river rejuvenation and inland waterways infrastructure projects and shared views on climate change and regional situation.

Modi hailed his meeting with the South Africa President as very productive and thanked him for accepting India`s invitation to be the Chief Guest at Republic Day during 150th anniversary of Mahatma Gandhi.

The Prime Minister started his day on a bright note with his meeting with Argentina President Mauricio Macri, who hosted breakfast at his official residence. They discussed cooperation in agriculture and food processing, space, defence, oil and gas and civil nuclear energy.