Former United Nations Secretary General and Nobel Peace Prize laureate Kofi Annan has died today after a short illness at the age of 80, his foundation announced. 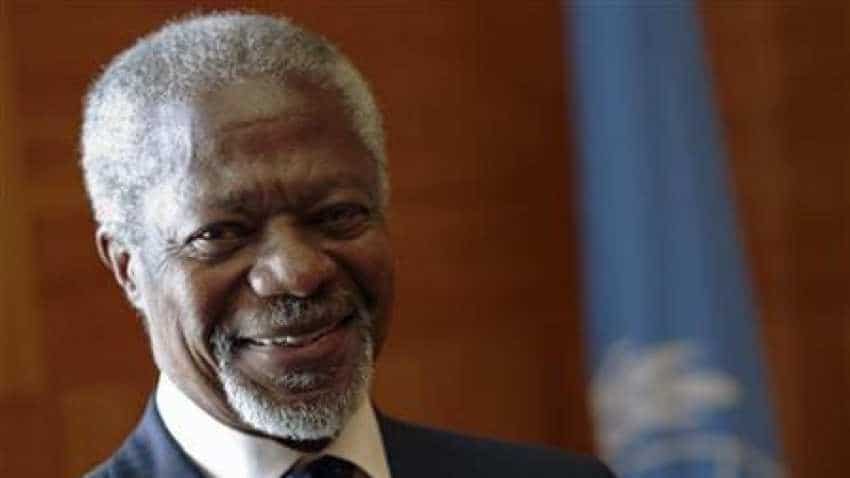 Former UN Secretary-General and Nobel Prize Laureate Kofi Annan died on Saturday at the age of 80, his family said.

Annan passed away after a short illness, with his wife and three children by his side, a statement shared on Twitter by the UN Migration Agency (IOM) said. He died in the Swiss city of Geneva, where he had been living for several years.

"It is with immense sadness that the Annan family and the Kofi Annan Foundation announce that the former Secretary General of the UN and Nobel Peace Laureate, passed away peacefully on Saturday 18th August after a short illness," his family said.

Annan was the first black African to take up the role of the world`s top diplomat, serving two terms from 1997 to 2006. He later served as the UN special envoy for Syria, leading efforts to find a peaceful solution to the conflict.

His family described him as "a global statesman" who fought for fairness and peace throughout his life, as well as "a son of Ghana" who felt a "special responsibility" to Africa.

"He will be greatly missed by so many around the world, as well as his staff at the Foundation and his many former colleagues in the UN system," the statement said.

The IOM said: "Today we mourn the loss of a great man, a leader and a visionary: Former UN Secretary General Kofi Annan. A life well lived. A life worth celebrating."

Annan was awarded the Nobel Peace Prize jointly with the UN in 2001 "for their work for a better organized and more peaceful world".

His tenure as the UN chief coincided with the Iraq War and the HIV/Aids pandemic.