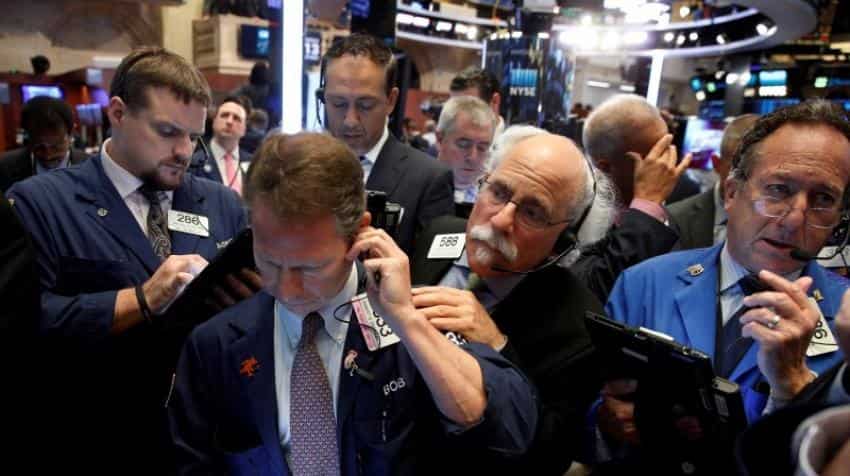 Traders work on the floor of the NYSE. Image Source: Reuters
Written By: Reuters
RELATED NEWS

US data showing a strong increase in consumer prices last month bolstered expectations that the US Federal Reserve will raise interest rates later this year, helping send US Treasury yields and the dollar higher.

Stocks fell as investors dumped shares of banks in North America and Europe after the US Department of Justice proposed Deutsche Bank pay $14 billion to settle an investigation into its selling of mortgage-backed securities.

Deutsche Bank, whose shares dropped roughly 8.5%, said it would fight the demand.

MSCI's world stocks index was down 0.49% and notched its second straight weekly loss.

Energy shares fell as crude oil prices slid by up to 2% to multi-week lows after swelling Iranian exports reinforced fears of a global glut.

While traders have all but ruled out the possibility of the Fed raising interest rates at its meeting on Tuesday and Wednesday, residual doubts and questions about when the US central bank may finally pull the trigger hurt sentiment on Wall Street.

The uncertainty over next week's Fed meeting as investors tweak their portfolios ahead of the next interest rate hike weighed on the market according to Jeff Carbone, co-founder of Cornerstone Financial Partners in Charlotte, North Carolina.

US Treasury yields, meanwhile, rose after the stronger-than-expected inflation data.

The so-called core consumer price index (CPI), which strips out food and energy costs, increased 2.3% in the 12 months through August, above the Fed’s target of 2% annual inflation.

The uptick in inflation is likely to be welcomed by Fed officials when they meet next week to deliberate on monetary policy.

"It certainly is another thing that could help them increase their trend toward normalisation," said Mary Ann Hurley, vice president in fixed income trading at D A Davidson in Seattle.

Futures traders are pricing in a 51.8% chance the Fed will raise rates at its December meeting, up from 47.5% on Thursday, according to the CME Group's FedWatch Tool.

The US dollar hit a more than two-week high against a basket of major currencies after the inflation data boosted bets the Fed would turn more hawkish.

The dollar index, which measures the greenback against a basket of six major currencies, was up 0.81% to 96.059.