Investors will focus on the US central bank`s gauge of inflation, which remains stubbornly below its 2 percent target, the risks it sees to its economic outlook, and any assessment of the impact of the Trump administration`s tax overhaul on growth. 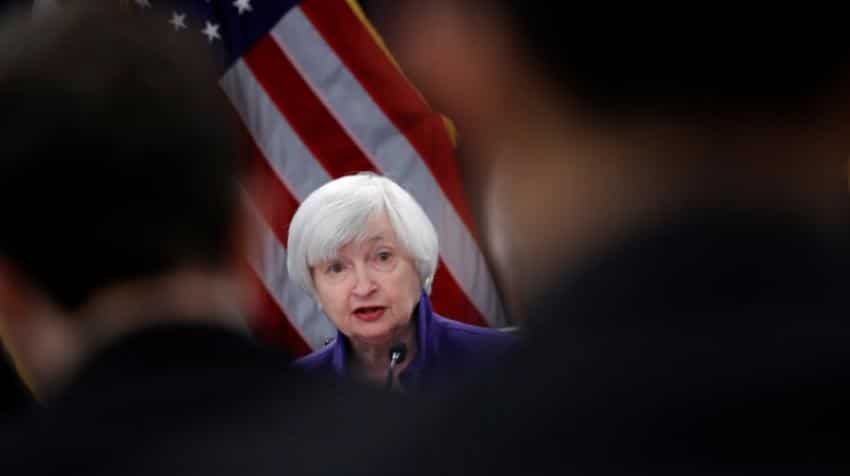 The Federal Reserve is expected to leave interest rates unchanged on Wednesday while signaling a gradual tightening of monetary policy later this year as the U.S. economy continues to expand and job gains remain solid.

Investors will focus on the U.S. central bank`s gauge of inflation, which remains stubbornly below its 2 percent target, the risks it sees to its economic outlook, and any assessment of the impact of the Trump administration`s tax overhaul on growth.

The Fed is due to release a statement at the end of its latest two-day policy meeting at 2 p.m. EST (1900 GMT). The policy meeting is Fed Chair Janet Yellen`s last as head of the central bank.

The economy has added about 10 million jobs and unemployment has fallen to a 17-year low of 4.1 percent during Yellen`s four-year tenure while interest rates have slowly risen from the near-zero levels put in place to fight the 2007-2009 recession.

Incoming Fed chief Jerome Powell has worked closely with Yellen and embraces her view that keeping rates on a slow upward path will allow unemployment to fall further, coaxing workers back into the labor force and fostering stronger wage growth.

With the outset of the Powell era only days away, analysts do not expect a dramatic shift from the Fed on Wednesday.

"Why change the current message on policy and possibly sway market opinion one way or the other, just before Powell takes over?" said Lou Brien, an analyst for Chicago trading firm DRW. "I don`t think Powell will shift the direction of policy in March, but it is only fair to give him a clean slate just in case."

The Fed raised rates three times last year and currently projects another three hikes in 2018. But that forecast, which has been largely accepted on Wall Street, will hinge on a continued pickup in inflation.

Even a small upgrade in the central bank`s description of inflation or its view of the balance of risks to the economic outlook could suggest a slightly faster pace of rate hikes than currently anticipated.

Several Fed policymakers have said that President Donald Trump`s restructuring of the U.S. tax code, including an estimated $1.5 trillion in corporate and individual tax cuts, could spur growth this year.

U.S. stocks have risen sharply since the tax package passed Congress late last year on expectations of a rise in corporate profits.