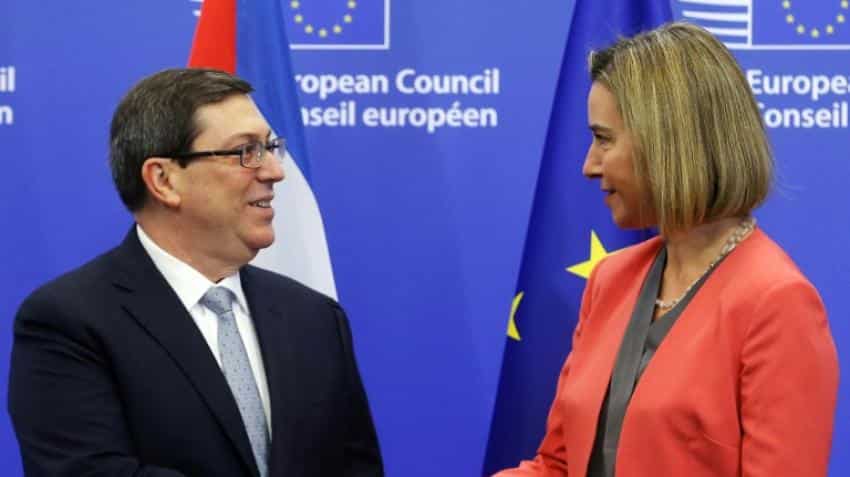 Cuba had been the only Latin American country that did not have a so-called "dialogue and cooperation" deal with the EU covering issues such as trade, human rights and migration. Image Source: AFP
Written By: AFP
RELATED NEWS

The European Union (EU) and Cuba on Monday signed a deal to normalise ties that had been blocked for decades by human rights concerns under revolutionary icon Fidel Castro.

Cuba had been the only Latin American country that did not have a so-called "dialogue and cooperation" deal with the EU covering issues such as trade, human rights and migration.

But EU ministers last week agreed to drop a policy in place since 1996 which stated that Cuba first had to improve its human rights standards before getting closer links with the bloc.

"Economic links with Europe will continue to be a priority for Cuba as we build a socialist economy," Parrilla said.

Castro died last month after more than 50 years at the helm of a self-styled Socialist paradise reviled by the West, with Cuba gradually opening up to the world, including bitter foe Washington.

In 2003, the EU had imposed sanctions on Cuba and suspended cooperation over a crackdown on journalists and activists and it took until 2008 to get talks going again.

Parrilla said the agreement "demonstrates that with good will and respect it is possible to make progress and resolve differences."

He recalled a speech in 2003 in which Fidel Castro had hailed the historical importance of the EU as a counterweight to the United States (US) which imposed a damaging trade embargo and other sanctions on Cuba after it sided with Moscow in the Cold War.

"The sovereignty and dignity of a people cannot be up for negotiation with anyone," he said.