The runway of Gatwick Airport, Britain's second-busiest after Heathrow Airport, remains closed since Wednesday night, when two devices were seen flying over the perimeter fence. 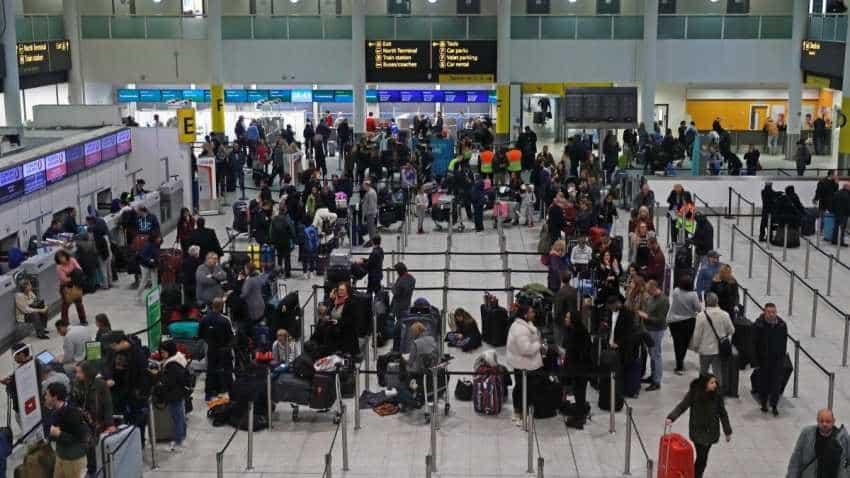 After the sighting of another drone on Thursday afternoon, the authorities said they were unable to reopen the runway "until it was safe to do so". Image source: Reuters
Written By: PTI
RELATED NEWS

Travel plans for thousands of passengers went awry on Thursday ahead of the Christmas holiday period after one of UK's busiest airports remained closed for the second day due to a number of drones spotted near its runway, leading to the Army being called in to assist local police.

The runway of Gatwick Airport, Britain's second-busiest after Heathrow Airport, remains closed since Wednesday night, when two devices were seen flying over the perimeter fence.

After the sighting of another drone on Thursday afternoon, the authorities said they were unable to reopen the runway "until it was safe to do so".

Prime Minister May described the situation as "irresponsible and completely unacceptable". "I feel for all those passengers whose travel plans have been disrupted by this drone activity and the action that has had to be taken in response to it," she told reporters during a joint press conference with Polish Prime Minister Mateusz Morawiecki, who is on a visit to the UK.

"At this particular time of year this is particularly difficult for people...We will continue to work with the Gatwick authorities in order to bring this to a close such that people will be able to get on to the travel that they were expecting over the Christmas," she said.

"Our hearts go out to all those who are desperately trying to go on holiday or arrive in the UK via Gatwick. I know the police are doing all they can to catch the operators of these drones," said House of Commons Leader Andrea Leadsom.

UK defence secretary Gavin Williamson later confirmed that Army has been called in to support police officers investigating the problem.

"The armed forces have a range of unique capabilities and this isn't something we would usually deploy but we are there to assist and do everything we can so that they are in a position to open the airport at the earliest opportunity," he said.

More than 20 police units from two forces are searching for the perpetrator, who could face up to five years in jail.

Superintendent Justin Burtenshaw, head of armed policing for Sussex and Surrey, described attempts to catch whoever was controlling the drones as "painstaking" because it was "a difficult and challenging thing to locate them". "Each time we believe we get close to the operator, the drone disappears; when we look to reopen the airfield, the drone reappears," he said.

Local Sussex Police investigating the incident at the airport in the south of England have not been inclined to shoot down the devices because of the risk from stray bullets. The force said it did not believe the drones are terror-related but a "deliberate act" of disruption, describing the devices as of "industrial specification".

"The police are looking for the operator and that is the way to disable the drone," said Gatwick's Chief Operating Officer Chris Woodroofe.

Around 110,000 passengers on 760 flights were due to fly out on Thursday, as the Christmas holiday period kicks in. The airport authorities warn that the disruption could last "several days".

Crowds of travellers spent the morning waiting inside Gatwick's terminal for updates, while others reported being stuck on grounded planes for hours.

The UK's Civil Aviation Authority said it considered this event to be an "extraordinary circumstance", and therefore airlines were not obligated to pay any financial compensation to passengers.