The European Union raised the possibility of taking countermeasures, France said the duties would be unacceptable, and China urged Trump to show restraint. Canada, the biggest supplier of steel and aluminium to the United States, said it would retaliate if hit by US tariffs 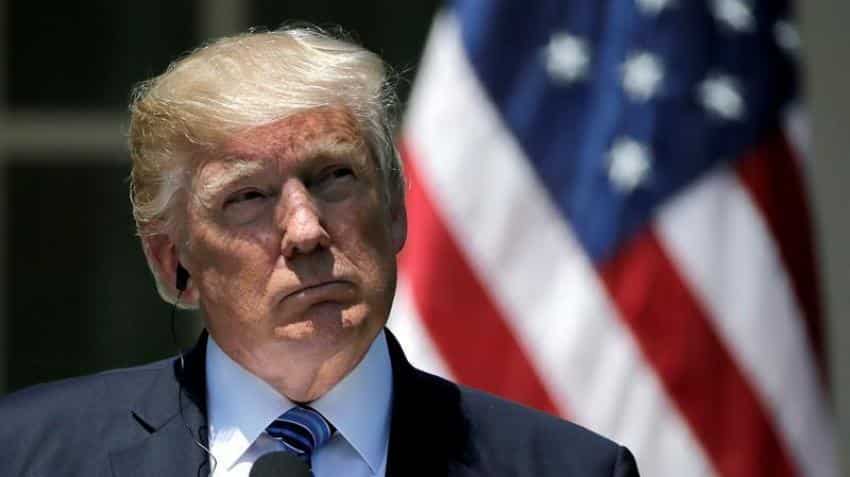 Donald Trump said on Thursday that a plan for tariffs of 25 percent on steel imports and 10 percent on aluminium products would be formally announced next week. Image source: Image source: Reuters

U.S. President Donald Trump struck a defiant tone on Friday, saying trade wars were good and easy to win, after his plan to put tariffs on steel and aluminium imports triggered threats of retaliation from trading partners and a slide in stock markets. The European Union raised the possibility of taking countermeasures, France said the duties would be unacceptable, and China urged Trump to show restraint. Canada, the biggest supplier of steel and aluminium to the United States, said it would retaliate if hit by U.S. tariffs.

The S&P 500 ended another turbulent week on an upbeat note Friday but major indexes posted their worst week of losses since early February as Trump`s threat to impose import tariffs on steel and aluminium rattled investors. The dollar fell against most currencies, dropping to its lowest in more than two years against the yen, as Trump`s tariffs proposal raised prospects of a damaging trade war.

Trump said on Thursday that a plan for tariffs of 25 percent on steel imports and 10 percent on aluminium products would be formally announced next week. "When a country (USA) is losing many billions of dollars on trade with virtually every country it does business with, trade wars are good, and easy to win," Trump said on Twitter on Friday.

In a later social media post, the Republican president said his aim was to protect U.S. jobs in the face of cheaper foreign products, a familiar theme in the "America First" credo he campaigned on for the 2016 election.

"We must protect our country and our workers. Our steel industry is in bad shape. IF YOU DON’T HAVE STEEL, YOU DON’T HAVE A COUNTRY!" he wrote. Trump earned some bipartisan support from lawmakers, mainly from America`s rust belt states.
"This welcome action is long overdue for shuttered steel plants across Ohio and steelworkers who live in fear that their jobs will be the next victims of Chinese cheating," said Senator Sherrod Brown, a liberal and populist Democrat from Ohio.

However, Governor Scott Walker of Wisconsin, a fellow Republican, urged Trump to rethink the tariffs.
"If the president wants to protect good-paying, family-supporting jobs in America, especially here in Wisconsin, then he should reconsider the administration`s position on these tariffs, particularly on ultra-thin aluminium," Walker said in a statement.
Many economists say that instead of increasing employment, price increases for consumers of steel and aluminium such as the auto and oil industries will destroy more U.S. jobs than they create.

RETALIATION LIKELY
Major U.S. trade partners are likely to hit back.  Europe has drawn up a list of U.S. products on which to apply tariffs if Trump follows through on his plan.
"We will put tariffs on Harley-Davidson, on bourbon and on blue jeans - Levi`s," European Commission President Jean-Claude Juncker told German television.

Trump`s threats to unleash a trade war over steel crushed any hopes of substantial progress in current talks with Canada and Mexico to rework the North American Free Trade Agreement, heightening fears for the trade deal`s future.
Canadian Prime Minister Justin Trudeau said any U.S. tariffs on steel and aluminium would be "absolutely unacceptable" and vowed to continue to engage with U.S. officials on the issue.

The International Monetary Fund also expressed concern, saying the proposed tariffs would likely damage the U.S. economy and those of other nations.
Trump`s announcement came after what one person with direct knowledge described as a night of "chaos" in the White House due to frequent switching of positions in the administration.

While Trump often lays out stark policy positions which he later rolls back as part of a negotiating tactic, White House spokeswoman Sarah Sanders said the levels of the planned tariffs were not expected to change.

Capital Alpha Partners, a policy research group in Washington, said a quick reversal by Trump was highly unlikely.
"We also don`t see a chance for fine tuning, exceptions, carve outs, or a country-by-country policy" in the short term, the group said in a research note. "We would be hopeful that the policy could be modified in time."

The United States is the world`s biggest steel importer, buying 35.6 million tonnes in 2017.
Peter Navarro, a White House adviser with largely protectionist views on trade and author of a book entitled "Death By China," brushed off the negative effects of tariffs on U.S. industry.

He said a 10 percent tariff on aluminium would add one cent to the cost of a can of beer, $45 to a car and $20,000 to a Boeing 727 Dreamliner. "Big price effects? Negligible price effects," he told Fox News.
But home appliance maker Electrolux said it was delaying a $250 million expansion of its plant in Tennessee as it was worried U.S. steel prices would rise and make manufacturing there less competitive.

Trump’s administration has imposed a series of trade duties on a range of goods from solar panels to washing machines.  It is even studying whether America’s rubber band makers need protection as Trump seeks to boost domestic manufacturing and employment. The decision on steel and aluminium was the most wide ranging and provocative to date and there is the prospect of more to come, with the government holding an investigation into alleged theft of U.S. intellectual property by China.
Trump made his tariff announcement as Chinese President Xi Jinping`s top economic adviser, Liu He, was visiting Washington.
Liu held a second day of talks at the White House with Treasury Secretary Steven Mnuchin, White House economic adviser Gary Cohn and Trade Representative Robert Lighthizer, and the U.S. officials stressed concerns about the U.S. trade deficit with China, market access and unfair treatment of U.S. companies.
"We held frank conversations," a White House spokeswoman said. We continue to be open to an exchange of ideas on how to resolve these concerns."
White House officials said Trump himself did not stop by the meeting with Liu as he sometimes does when senior foreign dignitaries, including Chinese officials, are visiting.
China, which Trump frequently accuses of unfair trade practices, earlier called for restraint.

The EU, which sees itself as a global counterweight to a protectionist-leaning Trump, spoke of countermeasures conforming with World Trade Organisation (WTO) rules.

Safeguard measures, last deployed by Europe in 2002 after then-U.S. President George W. Bush imposed steel import duties, would be designed to guard against steel and aluminium being diverted to Europe from elsewhere if U.S. tariffs come in.

But to conform with WTO rules such measures would have to apply to imports from all countries and could also hit producers including China, India, Russia, South Korea and Turkey. Economists say that Trump’s own expansionary budget policies will fuel ever larger trade deficits, essentially defeating his stated aim of having “balanced trade” with individual countries.