rump said that he will continue to monitor if India is "providing equitable and reasonable access to its markets" and meet the GSP eligibility criteria. 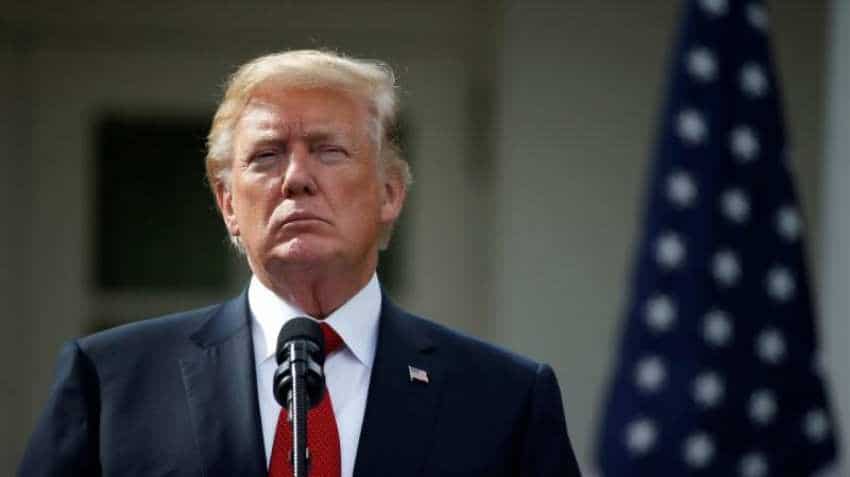 Trump said that he will continue to monitor if India is "providing equitable and reasonable access to its markets" and meet the GSP eligibility criteria. Photo: Reuters
Written By: IANS
RELATED NEWS

US President Donald Trump has announced that he was ending India`s $5.6 billion trade concessions under the Generalised System of Preferences (GSP) program accusing New Delhi of not providing Washington "equitable and reasonable access" to its markets.

Trump, who is on a mission to expand marker access abroad and end trade deficits, made the announcement on Monday in a letter to House Speaker Nancy Pelosi and Vice President Mike Pence in his capacity as the Senate President.

The US Trade Representative`s Office (USTR) said that the preferences will end in 60 days after the notification to Congress and the Indian government.

Meanwhile, Trump said that he will continue to monitor if India is "providing equitable and reasonable access to its markets" and meet the GSP eligibility criteria.

India had opposed proposals to end the GSP saying that it would be "discriminatory, arbitrary" and hurt the country`s development.

India is the largest beneficiary of the GSP exporting goods worth $5.6 billion to the US under the program. Congress establishes the conditions of eligibility for GSP, which include "providing the US with equitable and reasonable market access, protecting workers` rights and combating child labour".

Trump wrote in his letter: "I am taking this step because, after intensive engagement between the United States and the government of India, I have determined that India has not assured the United States that it will provide equitable and reasonable access to the markets of India."

The USTR said: "India has implemented a wide array of trade barriers that create serious negative effects on United States commerce", but did not mention the specifics in its statement.

"Despite intensive engagement, India has failed to take the necessary steps to meet the GSP criterion", it added.

Watch this video from Zee Business

At a hearing held by the USTR last June on withdrawing India`s GSP, the minister in charge of commerce at the Indian Embassy in Washington, Puneet Roy Kundal, said that withdrawing the GSP benefits "would be discriminatory, arbitrary, and detrimental to the development, finance and trade needs of India, which is a vast and diverse developing country with unique challenges".

The primary aim of the GSP is to help developing countries, particularly in sectors where the benefits can reach the poor.

Trump also said that he was ending the GSP for Turkey because of its economic success and rising living standards that would no longer make it eligible for the program that is meant to help developing countries.

The President has been on a warpath against what he said were high tariffs on US imports to India. While pushing for the Reciprocal Trade Act in January, he brought up India`s duty on American whiskey, which he said was 150 per cent and on Harley Davidson motorcycles that he asserted he had gotten reduced from 100 to 50 per cent.

The decision to end the GSP may not entirely be influenced by high tariffs imposed by India on US imports. The two countries have had differences over the restrictions placed on e-commerce by Amazon and on Walmart subsidiary Flipkart and on data housing by Visa and Mastercard.

The decision comes as the US is reported to be making headway in trade negotiations with China aimed mainly at cutting American trade deficits with a deal expected soon.

Ironically, a trade group warned that taking ending GSP for India could end up helping China.

The American Apparel and Footwear Association said in a written testimony that if GSP benefits are withdrawn for India as well as Indonesia and Thailand, "companies will have no choice but to return to sourcing from China".

It pointed out that Trump has threatened to impose 10 per cent punitive duties on US travel goods imports from China and ending the GSP for India "means that not only will sourcing return from China, but American consumers will pay far higher prices for their travel goods".

The US dairy industry was a strong advocate of ending the GSP for India citing its difficulties in exporting to India.

Shawna Morris, Vice President of the National Milk Producers Federation and the US Dairy Export Council, at the the June USTR hearing accused India of refusing to provide them equitable and reasonable access to its markets through "unscientific sanitary and phytosanitary requirements".

These requirements by India were that the exports should not come from cows that have been given cannibalised feed that includes offal or other meat products.

Kundal countered that it was not an issue fo of market access but of "certification given the religious, cultural and moral sensitivities" and India provide unimpeded market access to dairy products from all countries that met the criteria.

Another opposition came from the medical sector based on price controls on medical devices imposed by India. Kundal said that these were necessitated by India`s need to provide affordable health care to its citizens.