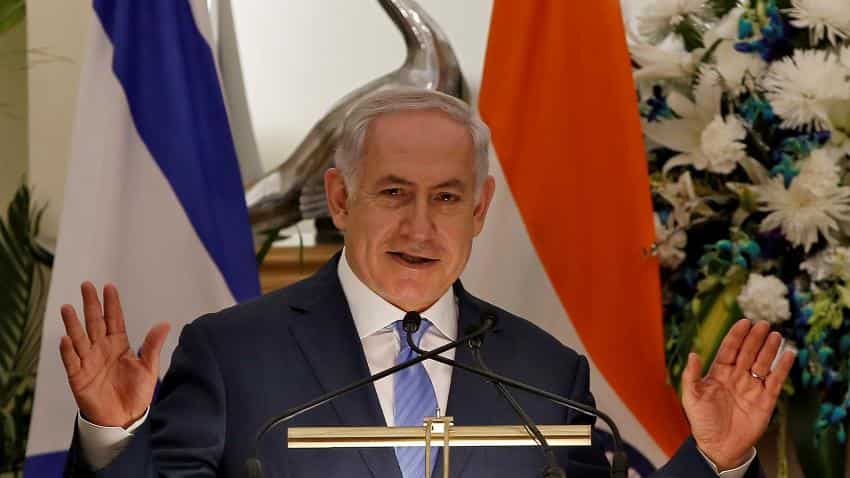 Netanyahu brandished a rectangular piece of dark green metal which he called "a piece of that Iranian drone. Image source: Reuters
Written By: AFP
RELATED NEWS

Israeli Prime Minister Benjamin Netanyahu warned Tehran over aggressions by what he called Iran and its "proxies" in Syria, while showing what he claimed was a piece of an Iranian drone shot down in Israeli airspace. Saying he had "a message to the tyrants of Tehran" during a speech at the Munich Security Conference, he warned: "Do not test Israel's resolve."

He brandished a rectangular piece of dark green metal which he called "a piece of that Iranian drone, or whats left of it, after we shot it down." Israel has said it shot down the drone on February 10 after it entered the country from Syria, and responded with a raid on what it said was the Iranian control systems for the craft in Syria.

During the strikes, one of Israels F-16 fighter jets was shot down, believed to be the first loss of an Israeli plane in combat since 1982. Israel's response marked the first time it publicly acknowledged hitting Iranian targets in Syria since the 2011 start of the civil war there.

Calling Iran's Foreign Minister Mohammad Javad Zarif the "smooth-talking mouthpiece of Irans regime," Netanyahu said: "Mr Zarif, do you recognise this? You should, its yours." Again referring to Zarif, who is expected to speak later in Munich, the Israeli leader said: "No doubt Mr Zarif will brazenly deny Irans involvement in Syria." "He lies with eloquence."

The Israeli military has claimed the drone was a copy of a US model captured by Iran in 2011, based on an analysis of the drones debris.