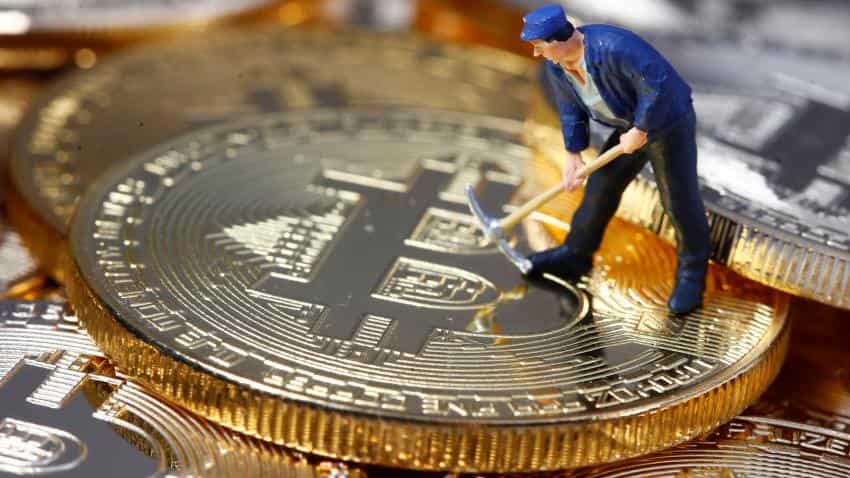 A small toy figure is seen on representations of the Bitcoin virtual currency in this illustration picture. Image source: Reuters
RELATED NEWS

China has grown into one of the world`s biggest sources of cryptocurrency mining but there are signs Beijing is increasing scrutiny of the sector`s players and may ask local authorities to regulate their power use. Bitmain Technologies, operator of some of the largest mining farms in the country, is among several companies looking to expand overseas.

Bitmain spokesman Nishant Sharma said in an e-mail on Friday that the company was looking at sites in Quebec and is in talks with regional power authorities in the province. It is also planning to expand in Switzerland.

Bitcoin mining consumes large quantities of energy because it uses computers to solve complex math puzzles to validate transactions in the cryptocurrency, which are written to the blockchain, or digital ledger. The first miner to solve the problem is rewarded in bitcoin and the transaction is added to the blockchain.

While Beijing has not issued any official edict on the bitcoin mines, two Chinese miners told Reuters that local authorities had grown more unwilling to allow expansion and had started to shut down some mines in late 2017, as China clamped down on cryptocurrencies.

"We, and from what I understand many of our peers, are already making plans to go overseas," said Li Wei, chief executive of ZQMiner, a Wuhan-based company that sells bitcoin mining equipment and has mines in three Chinese provinces.

Globally, regulators are increasingly voicing concerns about cryptocurrencies, which are not backed by any central bank, because of their volatility and worries about risks to investors. China, which has strict capital controls, is also worried that cryptocurrencies could facilitate illegal fund flows and breed financial risks.

In Canada, Hydro Quebec described a potential sales pipeline of around 30 large cryptocurrency miners after a campaign by the public utility to attract data centres to the province triggered a flurry of interest from bitcoin miners in 2017.

"Of the world`s top five largest blockchain players, we have at least three or four," David Vincent, director of business development at Hydro Quebec distribution, said in an interview on Wednesday.

Stephane Paquet, a vice president of Montreal International, which promotes foreign investment in the province`s largest city, has called Quebec a place for "green bitcoin."

According to Hydro Quebec, the province has an energy surplus equivalent to 100 Terawatt hours over 10 years. One terawatt hour powers 60,000 homes in Quebec during a year.

Neither Hydro Quebec nor Montreal International would divulge names of interested miners. Vincent said companies are eyeing operations from about 20 megawatts, the size of a data centre, to sites as large as 300 megawatts, about the size of a small aluminum smelter.

He expects some of the large companies to begin operations in Quebec this year and in early 2019. Bitmain`s spokesman said that Bitmain has been mining in Canada since 2016, but did not say where.

The challenge for miners is finding existing facilities in Quebec that already have buildings and other infrastructure in place to use the large energy supply required for cryptocurrency mining. A new facility would take about a year to be operational.

Hydro Quebec, which offers some of the lowest electricity rates in North America, charges an industrial rate of $0.0248 per kilowatt hour (Kwh) (2.48 U.S. cents) for data centres and $0.0394/kwh (3.94 U.S. cents) for cryptocurrency customers. Customers would have to assume other start-up costs, Filion said.

Textiles and pulp and paper factories are particularly attractive to cryptocurrency mining companies.

Alain Bourdages, a company vice president at Montreal-based Resolute Forest Products Inc, said by phone that the company has been contacted by cryptocurrency companies about possibly sharing their existing production sites, or ones that are no longer in use.

"We are looking at this prudently," he said. "It`s an interesting opportunity that could generate value."

In central Canada`s Manitoba province, provincial government-owned utility Manitoba Hydro has fielded more than 100 inquiries from cryptocurrency miners in the past three months about specific sites, a company spokesman said.

Manitoba`s power rates may soon rise, however. Manitoba Hydro is asking the province`s utilities board to approve a rate increase of 7.9 percent across the board, effective April 1, 2018. That is far larger than utility rate changes proposed last year in other provinces, including 0.7 percent in Quebec, according to Manitoba Hydro data.