Led by companies such as Qudian Inc and PPDAI Group Inc, the Chinese micro-lenders raised $1.2 billion with splashy U.S. listings, cashing in on a boom in borrowing by consumers in China with little access to traditional banks. 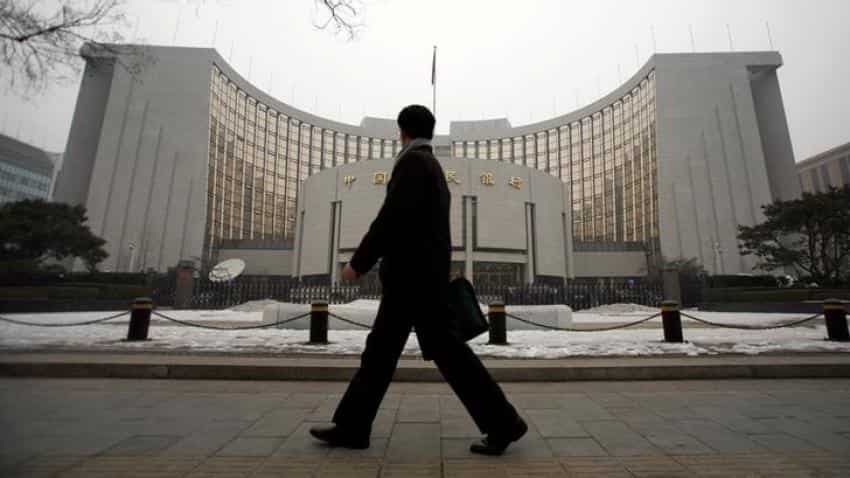 A man walks past the headquarters of the central bank of the People''s Republic of China in Beijing. Photo: Reuters

Executives from Chinese companies specialising in offering consumers small, easy-to-get loans became something of a fixture on Wall Street this year.

Led by companies such as Qudian Inc and PPDAI Group Inc, the Chinese micro-lenders raised $1.2 billion with splashy U.S. listings, cashing in on a boom in borrowing by consumers in China with little access to traditional banks.

However, the fortunes – and share prices – of the micro-lenders have slumped in the past week as Beijing clamped down on risks in the financial system, zeroing in on the fast-growing and loosely-regulated market for unsecured "cash loans".

On Friday, China`s financial regulators introduced new measures aimed at restricting the industry, which is estimated to be worth 1 trillion yuan ($151.5 billion).

China has long been known as a nation of savers, but consumers are rapidly embracing debt from non-bank online platforms. The number borrowers taking out cash loans from the micro-lenders is growing at an unprecedented rate, according to the lending companies and the government.

For borrowers, the easy loans can be a risky proposition – especially if they fall behind on payments. The loans are usually in the range of 1,000 yuan; interest is typically about 36 percent annually, and penalty charges and compound interest can quickly add up, according to borrowers.

The number of repeat borrowers is rising, which could signal financial stress on borrowers, analysts say. The companies, however, say the repeat lending is just a sign of the attractiveness of their platforms.

The People`s Bank of China and the China Banking Regulatory Commission did not respond to faxed requests for comment.

Angel Xiao, 23, who lives in the southern boomtown of Shenzhen and does not own a credit card, said she borrowed 10,000 yuan last year from two online lenders, PPDAI and Flower Wallet, to attend a jewellery design class.

But after she lost her job as a tutor, she found herself unable to pay back the initial loans. With interest piling up, Xiao eventually took out a series of new loans, with an average maturity of 14 days, from more than 30 other lenders.

"I didn`t have money to repay loans coming due," she said in an exchange on WeChat, a messaging service. "So I took out more loans. Every time when I didn`t have money, I used new loans to repay old loans. That`s how I got trapped deeper and deeper." China Rapid Finance Ltd, an online micro-lender that raised $60 million in an April listing on the New York Stock Exchange, defended its cash loan business.

In a statement, it said that its target customers have little or no history with China`s credit bureau, but that they "are prime and near-prime borrowers", and that it only grants new loans to borrowers who have repaid in full all prior loans granted by the company. It also said the rates it charges are affordable.

Online consumer lending in China, of which cash loans are a significant portion, dwarfs similar activity in the rest of the world combined, accounting for over 85 percent of all such activity globally last year, according to a recent report by the Cambridge Centre for Alternative Finance.

The boom in micro-lending comes as lenders seek to cash in on rising incomes in a country where credit card penetration remains at about one-third of the population, according to data from the central bank, which says about half a billion consumers don`t have a credit score. And the online cash loan sector is projected to reach 2.3 trillion yuan by 2020, according to the research firm iResearch.

China Rapid Finance in November reported a 514 percent year-on-year increase in short-term consumer lending in the third quarter to $908 million. PPDAI`S "handy cash loans", with maturities of one to six weeks, increased more than 10 fold year-on-year to 1.98 billion yuan in the second quarter, it said. Qudian recorded a 695 percent increase in net income for the first six months this year, it said in its listing prospectus. Qudian and PPDAI declined to comment.

In addition to the companies that have already listed on U.S. markets, another Chinese lender, LexinFintech Holdings Ltd, filed for a Nasdaq listing in mid-November hoping to raise $500 million.

LexinFintech said in a statement on Friday that it "continues to work toward those objectives as described" in its filing.

The explosion in online lending to those without access to traditional banks has raised concerns about the risks of default. Outstanding household debt in China equalled 45.5 percent of gross domestic product at the end of the first quarter, according to the Bank of International Settlements, compared to 27.9 percent five years ago. But that total doesn`t include most online consumer lending, analysts say.

"It is entirely fair to say household debt is much higher than is understood," said Professor Christopher Balding at the Peking University HSBC School of Business in Shenzhen. He estimated that household debt could be over 100 percent of household income in China.

Nearly 40 percent of Chinese households lack savings, higher than even the U.S. rate, meaning their cash buffer to pay off debt is limited, said Lu Xiaomeng, a researcher at the Survey and Research Center for China Household Finance at the Southwestern University of Finance and Economics.

The cash loan industry is largely "supply-driven", said Johnson Zhang, chief financial officer at the Chinese peer-to-peer lender Hexindai Inc. "Whether there is real demand and whether borrowers will be able to pay them back are questionable," he said, emphasizing that his company only accepted borrowers with credit cards.