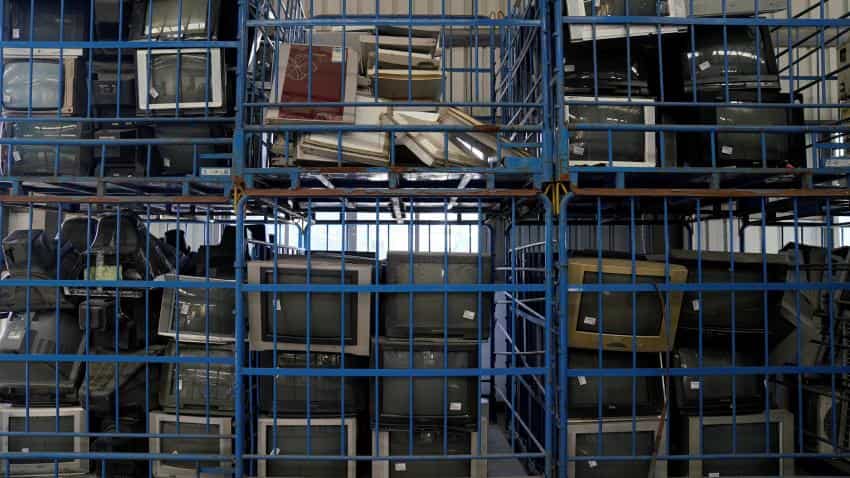 TV sets about to be recycled are seen in a warehouse at the government-sponsored recycling park in the township of Guiyu. Image Source: Reuters

The dizzying stench of burning plastic still drifts through the alleys, workshops and warehouses of Guiyu, the southern Chinese town that has long symbolised China`s role as the main recycler of the world`s waste.

But residents say the air isn`t half as noxious as it was five years ago, when authorities launched a drive to industrialise the town`s recycling operations – and address the chronic health problems that came from dismantling things like old computers and mobile phones by hand.

The acrid black smoke that once billowed from the backstreets has gone, and the rivers that wind their way through the town of about 100,000 people, though still cluttered with trash, are much cleaner, residents say.

Now, the residents of Guiyu – located in the economic powerhouse province of Guangdong, about 175 miles from Hong Kong – are grappling with a new cleanup of the recycling industry that remains a mainstay of the town`s economy. 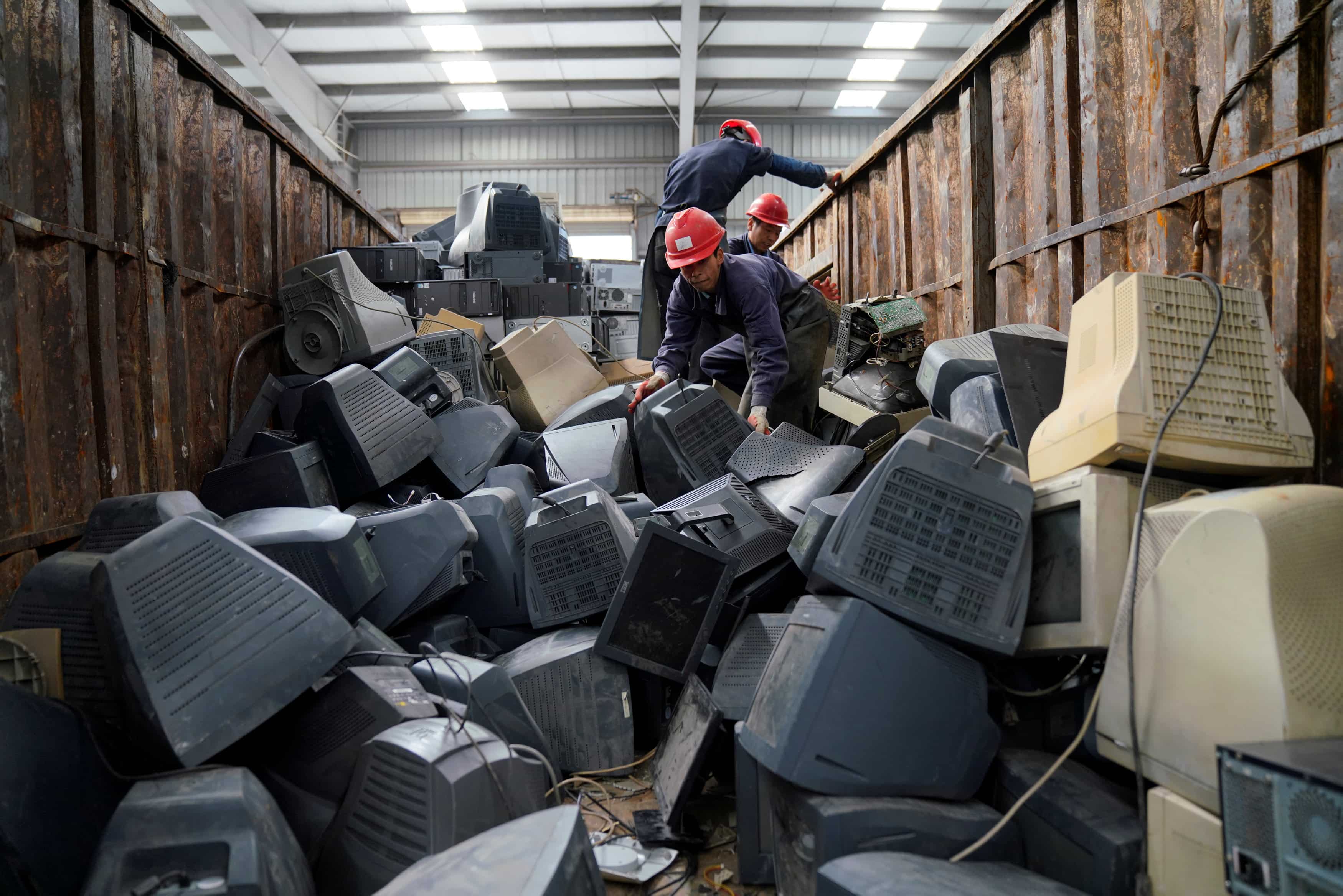 In an effort to deal with its fast-growing domestic waste problem, the Chinese government has blocked all imports of 24 types of foreign trash.

The ban, which took effect on Jan 1, has left countries like Britain and the United States reeling, with few alternative destinations for mountains of old mobile phones, paper, textiles and plastics once treated in backyard operations along China`s eastern coast.

It has also forced recycling centres like Guiyu to step up their efforts to transform informal, backstreet industries into fully regulated, more technologically advanced and environmentally friendly ones. 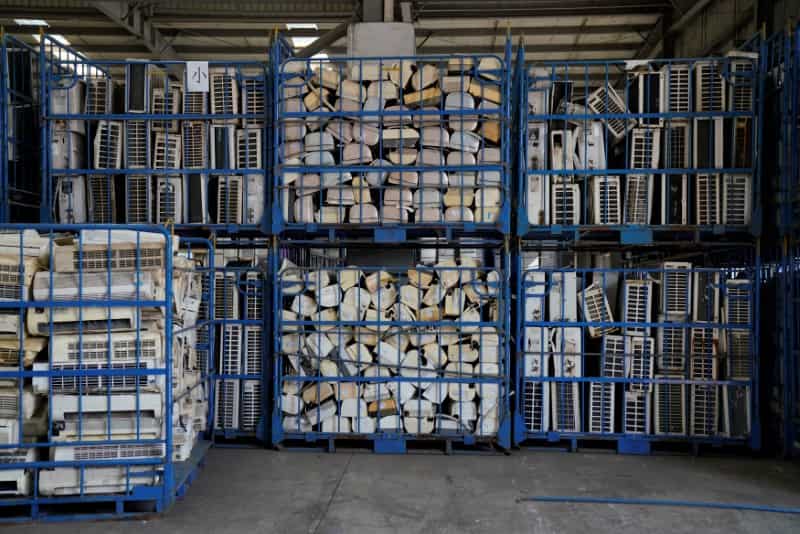 Air conditioners, about to be recycled, are seen in a warehouse in Guiyu. Image Source: Reuters

The effort in Guiyu also underlines the ability of the Chinese government to address the country`s chronic pollution issues when it has the political will - and offers the right incentives - to do so.

While residents in Guiyu generally welcome the cleaner environment, the ban on foreign waste - which is usually better sorted than domestic trash and therefore more lucrative to handle - has been a damaging blow for many recyclers.

The boss of one recycling facility, who requested anonymity, said she was "close to bankruptcy".

"We don`t have any foreign trash any more," she said. "The ban has made it harder to make money."

These backyard facilities still receive local trash, but are mostly limited to handling lower-end plastics. Higher-end electronic and metal waste is limited to those companies that move into a new recycling park set up by the local government that has facilities to deal with the pollution risks.

The new regulations come as China struggles to tackle the country`s soaring domestic waste problem. Beijing has said it plans to invest nearly 200 billion yuan ($31.07 billion) in household waste treatment alone over 2016-2020 and has vowed to stop being a receptacle for the world`s junk.

"The fundamental purpose was to solve the problem of pollution," said Wang Jingwei, a professor at Shanghai Polytechnic University who runs an experimental recycling facility and advises governments on waste treatment.

"Some big cities, and even some remote rural areas, are besieged with trash," he said. "The dependence on foreign waste meant no one was dealing with domestic garbage."

In the 2000s, Guiyu became a symbol of the environmental devastation caused by recycling hazardous waste with little regulation after being singled out by groups like Greenpeace and featuring in a string of international media reports. 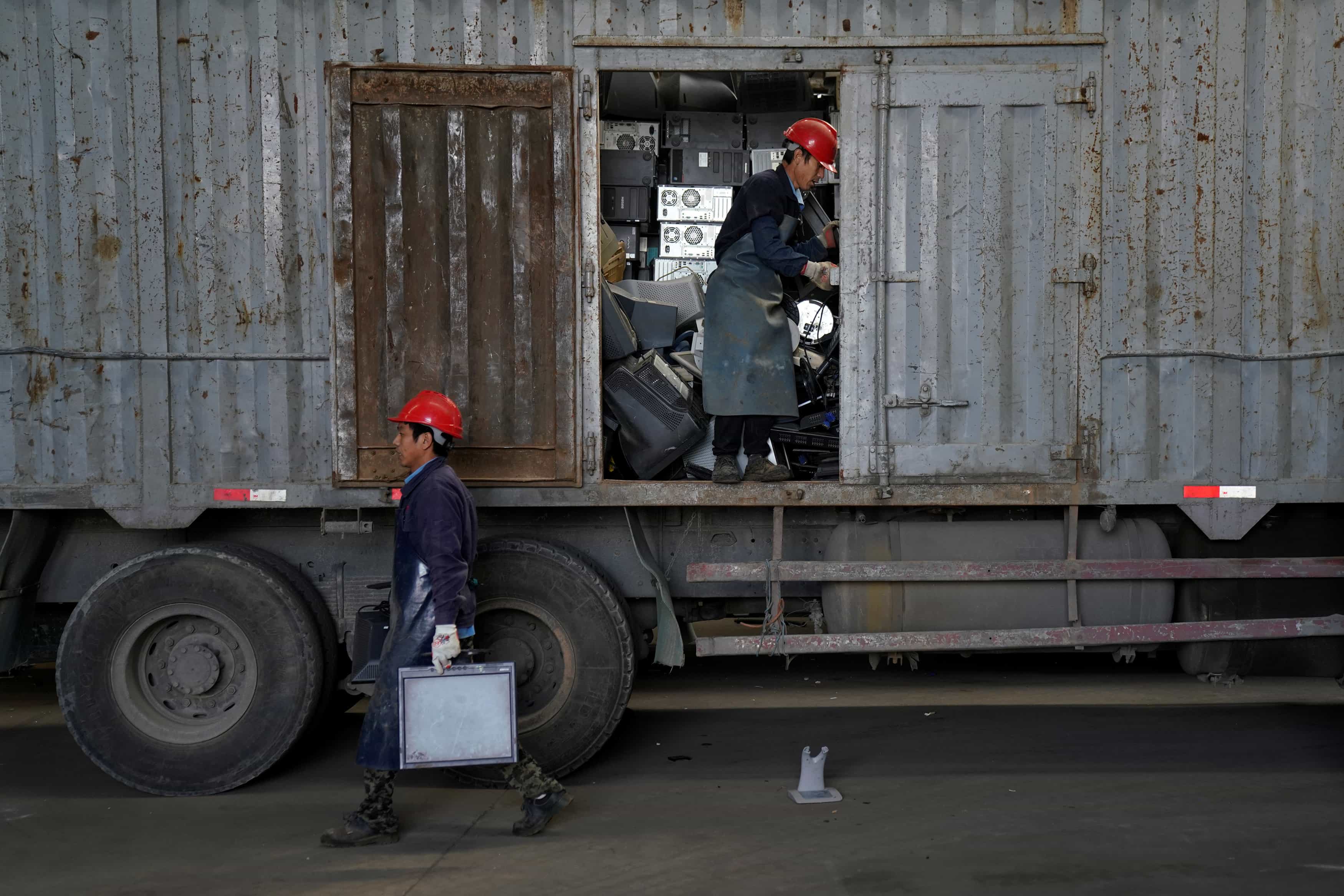 Workers downloading electronic waste about to be recycled are seen in a warehouse at the government-sponsored recycling park in the township of Guiyu. Image Source: Reuters

Trash is still the mainstay of Guiyu`s economy, but hundreds of recycling businesses have been consolidated or shut completely in recent years and authorities are now cracking down on smuggled waste, further starving small and polluting businesses of supplies.

"Although the dismantling of old electronics is the leading industry in Guiyu, we should say it was more a profession than an industry," said Zheng Jinxiong, vice chairman of a government commission tasked with running the recycling industry park, set up on the edge of town.

"The local government had an obligation as well as an ability to lead, standardise, make it scientific," he said.

Zheng said the government had tried to make the changes easier for residents, funding land purchases and renting them new buildings at low cost, as well as providing discounts on environmental protection equipment. 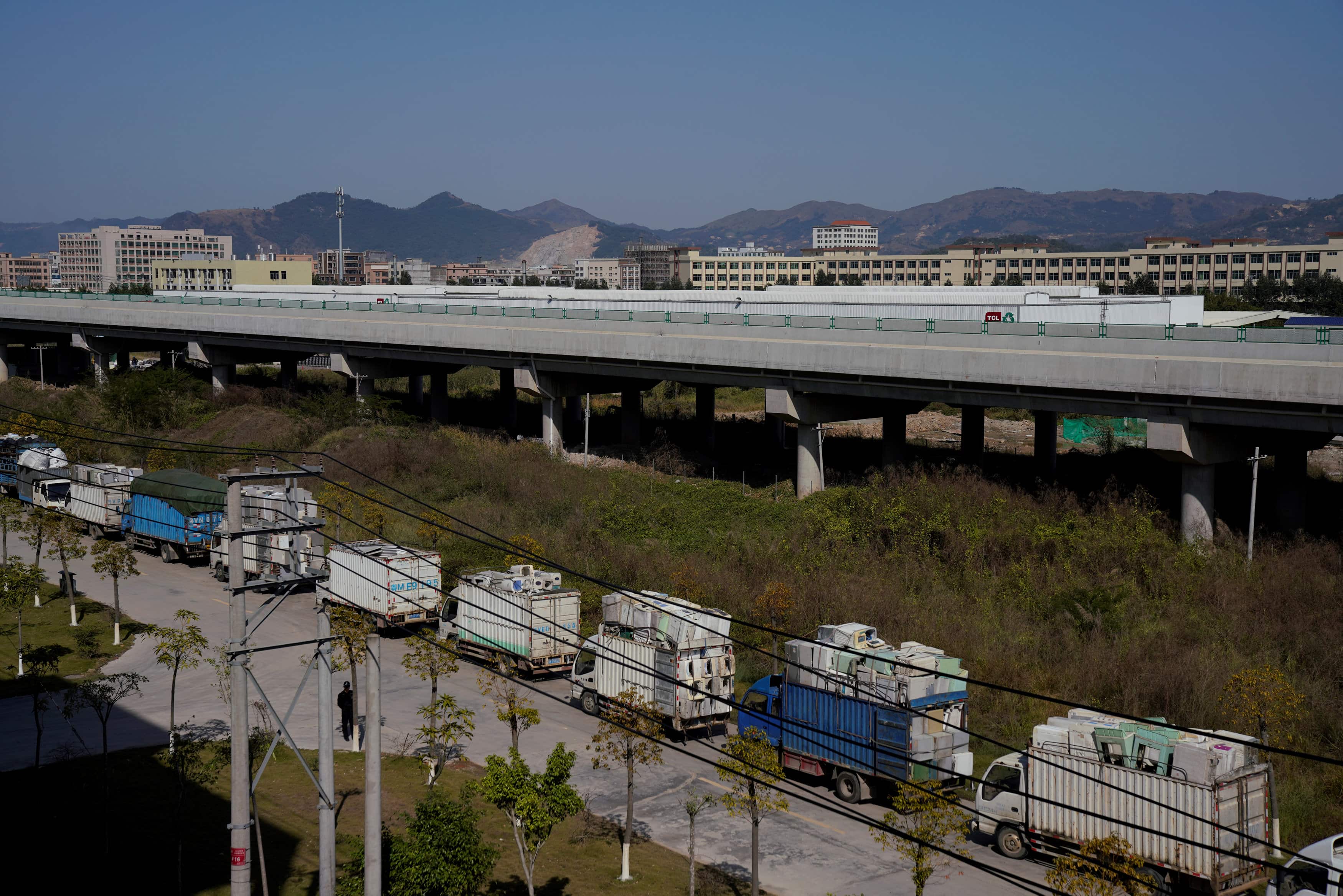 Trucks carrying electronic waste about to be recycled are seen in a warehouse at the government-sponsored recycling park in the township of Guiyu. Image Source: Reuters

Five years ago, sacks of trash provided a decent living for thousands of farmers and labourers in Guiyu. Much of that involved dismantling modems, mainframes and mobile phones in homes or backstreet workshops.

Workers would rip out the innards of electronic products with their hands, applying acid and melting down casings with cigarette lighters, extracting metals like copper and shredding plastic into reusable pellets.

With backyard operators banned from handling electronic waste, truckloads of broken computers and circuit boards are now delivered to the sprawling industrial park, where authorities can monitor environmental, health and safety standards.

Some big recycling companies have been encouraged to invest in the park, including TCL, whose local branch, TCL Deqing, invested 50 million yuan in a production line for dismantling household appliances.

The government said 1,243 businesses have been consolidated into 29 larger enterprises and relocated to the park. As many as 3,245 makeshift chimneys built to expel toxic recycling fumes from residential buildings have been removed.

However, almost 1,500 households are still recycling plastic in Guiyu`s old town, a warren of cluttered backstreets, where sacks packed with waste - keyboards, cigarette lighters, toys, old tyres - spill out of shops and warehouses.

A woman who would only provide her surname, Su, said she used to recycle small amounts of electronic waste to help supplement the family income.

"We stopped doing it because it was bad for our health," she said.

Su said she and her husband got involved in the business to pay their youngest child`s school fees. Middlemen would visit their home every week and pay them for the recycled materials, with no questions asked.

"We didn`t know where it came from," she said. "We know some people actually went overseas directly and shipped it back in containers."
SMUGGLING TRASH

In addition to the ban on waste imports, China is also targeting smugglers who bring in trash from abroad.

Last year, China`s customs authorities vowed to "unflinchingly crack down" on waste smuggling, and 421 suspects were arrested over the course of the year, including 127 caught in December, accused of bringing in 323,000 tonnes of plastics and mine slag.

According to court documents, some gangs were involved in schemes to launder imported cargoes of scrap mobile phones and computers by shipping them from Hong Kong to the North Korean port of Nampo.

There, they would be dismantled, stripped of identifying features and smuggled to the Chinese border port of Dandong, from where they were sent to Guiyu, classified as domestic waste.

Wang, the Shanghai waste expert, said Chinese ships delivering goods to Europe and elsewhere had an incentive to bring waste into China: whatever the price, it would be preferable to returning home with empty holds.

Guiyu`s industrial park said it had tightened procedures to stop smuggled waste from entering its gates, and was cooperating with police, customs and environmental authorities.

"I dare not say there is no smuggling at all, but right now we can say that it is harder to come across, and fundamentally it isn`t happening anymore," said Zheng.

He also said that Guiyu had been struggling to handle waste from the surrounding province of Guangdong, as well as China and the rest of the world.

"If we can handle all the various waste in our province and still have capacity, then we can also do more from the rest of the country," he said.