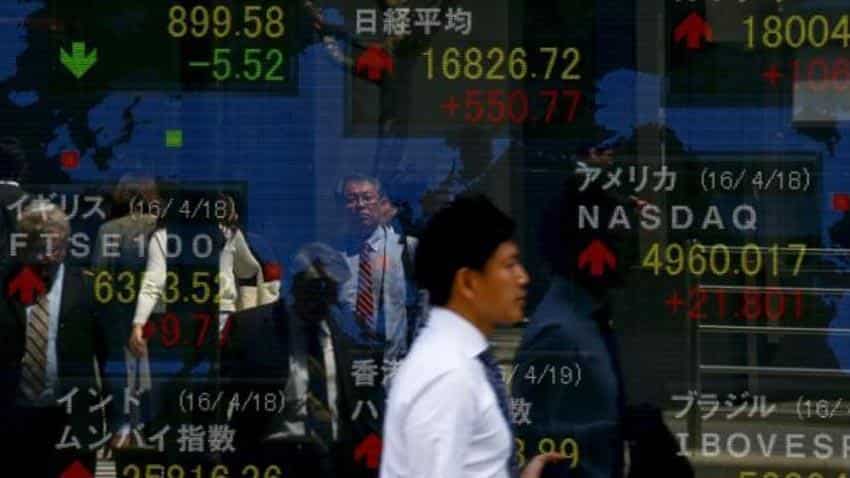 A man walks past a display of the Nikkei average and other market indices outside a brokerage in Tokyo in Japan on April 19, 2016. Image Source: Reuters/Thomas Peter

Asian shares stepped back from a one-year high on Wednesday after the influential New York Federal Reserve Bank president said the Fed could raise interest rates as soon as September, prompting investors to pause after rallies in recent weeks.

New York Fed President William Dudley said that as the US labour market tightens and as evidence of rising wages builds, "we're edging closer towards the point in time where it will be appropriate I think to raise interest rates further."

Comments from Dudley, a permanent voter on policy and a close ally of US Fed Chair Janet Yellen, also included an unusual warning on low bond yields and were seen as more hawkish than a cautious message last month.

Atlanta Federal Reserve Bank President Dennis Lockhart, seen as centrist, concurred saying he did not rule out a September hike - something markets have almost completely priced out.

"Clearly the Fed seems to think the market's pricing of a September rate hike is too low. Today's minutes of the Fed's July policy meeting could be more hawkish than market expectations," said Tomoaki Shishido, fixed income strategist at Nomura Securities.

Yet markets still only half believe their comments, remembering that the Fed ended up keeping rates on hold in June even after Fed officials talked up the possibility of rate hike in preceding weeks.

Fed funds rate futures are pricing in a 50% chance of a rate hike by December, a small increase from below 50% earlier this week.

US consumer prices were unchanged in July from the previous month, following two straight monthly increases of 0.2%.

The dollar's index against a basket of six major currencies plunged to 94.426 its lowest level since late June before paring some of losses to stand at 94.844, still down 0.9% on the week.

"As the world economy is slowing down, many countries now need a cheaper currency to support share prices. The US wants a cheaper dollar and so does China, leaving the yen taking the brunt," said Daisuke Uno, chief strategist at Sumitomo Mitsui Bank.

The British pound recovered further from Monday's five-week low against the dollar and rising from three-year lows against the euro after UK inflation was stronger than expected.

The data was the first in a run of July economic data that should show some of the initial impact of the Brexit vote on the economy.

The pound is bracing for UK jobless data later in the day.