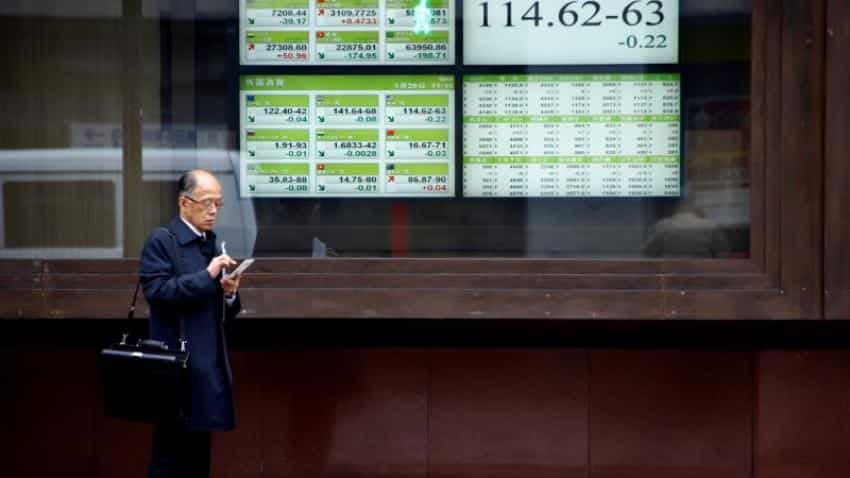 Asian stocks retreated on Thursday, taking their cues from a subdued session on Wall Street, while the dollar retained gains made after the Federal Reserve delivered a hawkish policy statement.

At the end of its two-day meeting, the Fed kept its benchmark interest rate steady as expected, but downplayed weak first-quarter economic growth and emphasised the strength of the labour market, a sign it was still on track for two more rate increases this year.

Futures traders are now pricing in a 72% chance of a June rate hike, from 63% before the Fed`s statement, according to the CME Group`s FedWatch Tool.

"The key over the coming weeks will be the economic data from the U.S. but, in addition, the (Federal) will be closely watching Washington and negotiations surrounding the new administration’s tax cut plans," said Lee Ferridge, head of multi-asset strategy for North America at State Street Global Markets.

"Should the data hold up (or better still, improve from here), while the chances of a late summer tax cut agreement remain intact, then the market will likely price in a June move."

Attention now turns to U.S. non-farm payrolls for March, due on Friday, after separate data showed private employers added 177,000 jobs in April. That was higher than expected but the smallest increase since October.

Economists polled by Reuters expect U.S. private payroll employment likely grew by 185,000 jobs in April, up from 89,000 in March. MSCI`s broadest index of Asia-Pacific shares outside Japan slid 0.15% in early trade on Thursday.

Australian shares were 0.3% lower. Japan is closed for the Golden Week holiday. South Korea`s KOSPI bucked the weaker trend and was up 0.5% after touching an all-time high earlier in the session on strong corporate earnings.

The index was also dragged lower by Facebook and Tesla, both of which dropped during the session and after hours, despite upbeat quarterly results.

Political concerns, which have taken a backseat recently, may re-emerge, with a U.S. House of Representatives vote on a revised bill to repeal Obamacare due later in the session after two failed attempts to corral enough support to pass the legislation.

House Majority Leader Kevin McCarthy said Republican leadership is confident there is enough support for the bill to pass, after key moderate leaders met with President Donald Trump on Wednesday. Even if the bill passes the House, it could face an uphill battle in the Senate.

In Europe, Germany ended higher but Britain and France closed lower. The pan-European STOXX 600 index lost 0.04% to slip from a 20-month high.

The euro was steady at $1.0889 early on Thursday, after losing 0.4% on Wednesday. Following a debate between French far-right leader Marine Le Pen and centrist Emmanuel Macron, who will face off in the second round of the Presidential election on Sunday, a poll showed some 63% of voters found market favourite Macron to be more convincing.

In commodities, oil prices slipped on Thursday after a smaller-than-expected decline in U.S. inventories.

U.S. crude pulled back 0.4% to $47.65 a barrel. On Wednesday, they touched their lowest level in over five weeks before closing higher. Gold was flat at $1,238.31 an ounce, failing to regain any of Wednesday`s 1.5% loss after the dollar strengthened on the Fed`s statement.