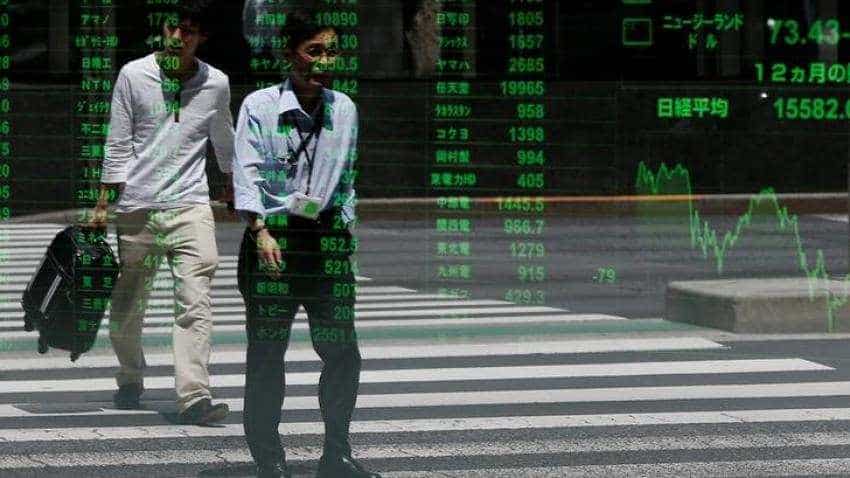 The British pound, which had fallen 0.51% on Thursday after Johnson`s call for a general election on Dec. 12, extended its slide, edging down to $1.2844. British Prime Minister Boris Johnson conceded on Thursday for the first time that he would not meet his "do or die" deadline to leave the European Union next week.

Continued uncertainty over Brexit comes against the backdrop of pertinently sluggish growth. New orders for U.S.-made capital goods fell more than expected in September and shipments also declined, in a sign that business investment remains soft. A Reuters poll of economists in recent weeks showed that most think a steeper decline in global growth is more likely than a synchronised recovery, despite central bank easing.

In his last meeting as president of the European Central Bank, Mario Draghi left ECB policy and guidance unchanged, but advised his successor to "never give up" on propping up the eurozone economy in the face of a worsening outlook. On Wall Street, strong quarterly results from Microsoft and PayPal helped lift the tech-heavy Nasdaq, which closed up 0.81% at 8,185.80.

The S&P 500 <.SPX> also rose, gaining 0.19% on the day, but the Dow Jones Industrial Average <.DJI> finished 0.11% lower at 26,805.53, weighed down by 3M after the company cut its full-year earnings forecast. However, caution prevails despite the gains in risk assets in recent weeks, supported by apparent progress in Brexit negotiations and China-U.S. trade talks.

"On the whole, we conclude that we have not entered into a new `risk on` phase from a broader trend perspective just yet," said George Davis, chief technical strategist at RBC Dominion Securities. Investors are also nervous ahead of a summit in Chile where U.S. President Donald Trump hopes to finalise a partial trade deal with China`s Xi Jinping.

Rattling confidence was a speech by U.S. Vice President Mike Pence on Thursday, which criticised China`s handling of the Hong Kong protests and its treatment of Muslim Uighurs in the Xinjiang region. Those comments sent the S&P 500 index briefly lower. The yield on benchmark 10-year Treasury notes was lower, falling to 1.759% compared with its U.S. close of 1.766% on Thursday. The two-year yield , which rises with traders` expectations of higher Fed fund rates, was down at 1.5757% compared with a U.S. close of 1.582%.

Investors are widely expecting the U.S. Federal Reserve to cut interest rates for a third time this year at its monetary policy meeting next week. Those expectations had helped to lift gold prices, but the precious metal was lower on Friday, dropping 0.14% to $1,501.10 per ounce. [GOL/]
The dollar gained 0.05% against the yen to 108.66 and the euro was barely lower on the day at $1.1101.

The dollar index <.DXY>, which tracks the greenback against a basket of six major rivals, nudged 0.05% higher to 97.680. Oil prices were lower after rising on Thursday on a surprise drop in U.S. crude inventories and the hopes for market-supporting actions by OPEC and its allies. West Texas Intermediate (WTI) crude was down 0.28% to $56.07 a barrel, and global benchmark Brent crude dipped 0.31% to $61.48 per barrel.