Japan`s Nikkei lost 0.1%, easing away from a three-month top in the face of a strengthening yen. 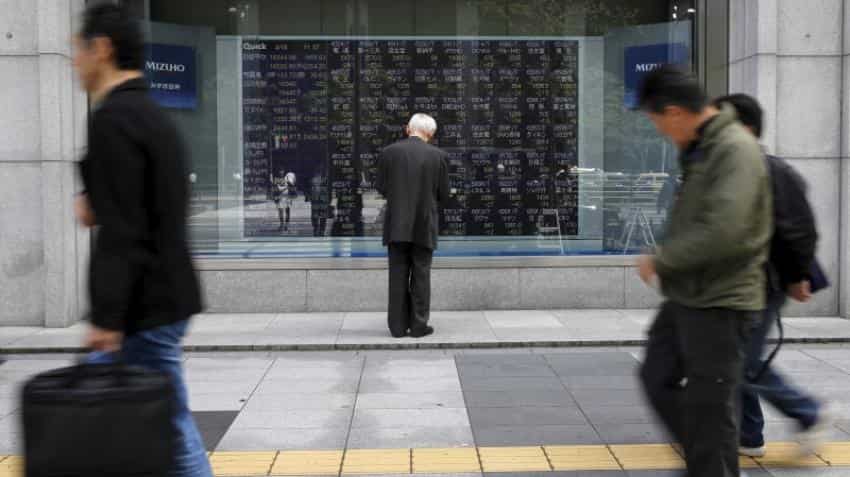 Asian shares hovered near one-year peaks on Thursday as investors awaited Chinese trade data and a policy meeting by the European Central Bank, where it may announce an extension of its asset buying campaign.

MSCI`s broadest index of Asia-Pacific shares outside Japan dipped 0.2%, but that followed four days of gains which took it to the highest since late July 2015.

Japan`s Nikkei lost 0.1%, easing away from a three-month top in the face of a strengthening yen.

China`s trade report should offer some guidance on the state of global demand. So far, Asia`s trade recession shows no sign of abating and economists polled by Reuters expect China`s exports fell 4% in August, a similar rate to July.

Imports may have fallen 4.9%, which would be a significant improvement from July`s 12.5% fall, likely due to higher commodity prices.

Beijing would welcome any sign of improvement on the trade front as the economy has become increasingly unbalanced, with growth ever more reliant on government spending as private investment fizzles.

The main event later on Thursday will be the ECB`s regular policy meeting. Nearly all analysts polled by Reuters expect rates to remain unchanged on Thursday, though there was more uncertainty on whether the ECB would announce an extension of its 80 billion euro of monthly asset buys.

If it were to make that call, it would likely reinforce speculation of more easing before year end and could pressure the euro.

The single currency was parked at $1.1243 on Thursday, just off the week`s top of $1.1269. It jumped earlier in the week when a disappointing reading on the US services sector seemed to diminish the chance of a rate hike from the Federal Reserve and slugged the dollar across the board.

Neither was there much urgency to tighten in the Fed`s latest Beige Book report on the economy, which was littered with the words "modest" and "moderate".
In particular, there was little sign of the wage pressures that the Fed is counting on to push inflation higher.

Futures markets imply only around a 15% chance of a rate rise in September, rising to 42% for December.

The dollar was also steady against a basket of currencies at 94.930, having touched a one-week low at 94.690. The yen remained firm at 101.81 per dollar due in part to talk the Bank of Japan`s board was struggling to agree on a common front for more easing at its policy review later this month.

In commodity markets, US crude extended an overnight bounce after US inventory data showed what might be the largest weekly stock draw in over three decades. US crude was 82 cents higher at $46.32 a barrel, while Brent futures rose 72 cents to $48.70.