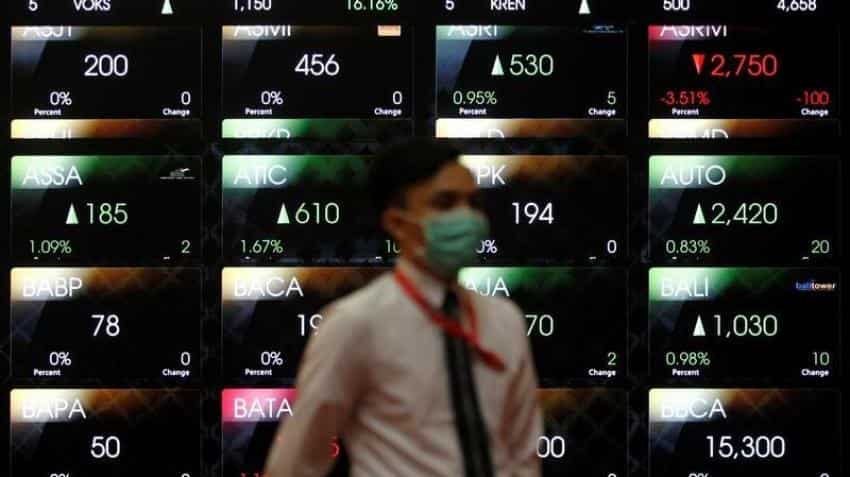 An employee walks in front of an electronic board at the Indonesia Stock Exchange in Jakarta. Photo: Reuters
Written By: Reuters
RELATED NEWS

The gains came after Russia said it was ready to join the Organization of Petroleum Exporting Countries in limiting crude output and Algeria called for similar commitments from other non-OPEC producers.

OPEC aims for agreements to cut about 700,000 barrels per day in its first reduction in eight years.

South Korea`s KOSPI rose 0.1% after opening lower as Samsung Electronics  plunged by much as 5% as the company struggles to contain a deepening crisis over its Galaxy Note7 phone.

Samsung told customers on Tuesday to stop using their Note7 smartphones while it investigated reports of fires in the devices.

The world`s top smartphone maker said it had asked all global carriers to stop sales of the Note7 and to stop providing replacements while it worked with regulators to investigate the problem.

The dollar retained overnight gains on growing expectations that the Federal Reserve will raise interest rates this year.

Traders have priced in a 70% chance that the Fed will hike at a Dec. 13-14 policymakers` meeting, up from 66% early Friday, according to CME Group`s FedWatch tool.

Investors are looking to Wednesday`s release of minutes of the latest Federal Reserve Open Market Committee meeting to see how close the Fed was to hiking rates last month.

The dollar index, which tracks the greenback against a basket of six global peers, added 0.1% to 96.989 in early Asian trade, after climbing 0.3% on Monday.

The Mexican peso strengthened more than 2% on Monday against the U.S. dollar, which fell to a one-month low of 18.795 pesos after the second presidential debate between Trump and Democratic nominee Hillary

Clinton. The Mexican currency retained those gains on Tuesday.

Paul Ryan, the top Republican in the U.S. Congress, all but conceded on Monday that Clinton was likely to win the White House on Nov. 8, and said he would put his full energy into preserving Republican majorities in Congress so as not to give her a "blank check."

Ryan, speaker of the House of Representatives, said he would not defend Trump or campaign for him after the uproar over the New York businessman`s sexually aggressive comments that surfaced on Friday.

"This is a strong signal that many of the Republican establishment believe Trump`s campaign is so toxic that they are seeking to dissociate themselves from it," IG`s Nicholson said.

Clinton has led Trump in most national opinion polls for months and Trump`s poll numbers have fallen further since Friday when a video from 2005 showing the former reality TV star bragging crudely about groping women and making unwanted sexual advances was broadcast.