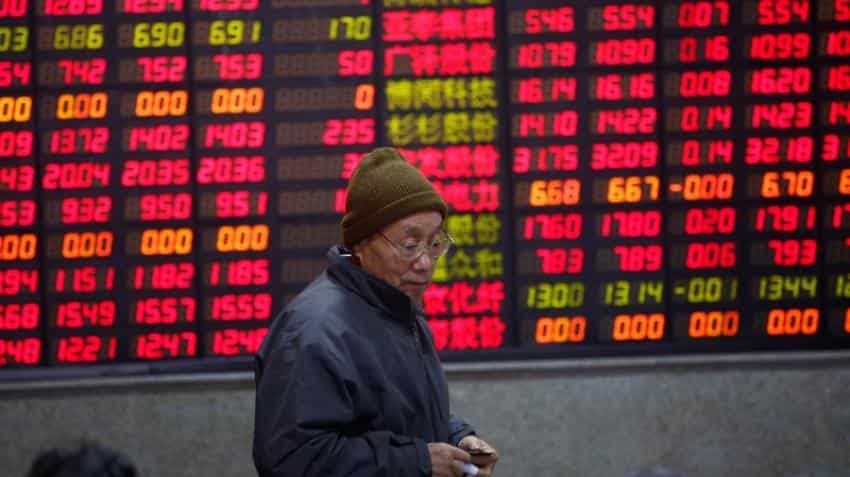 An investor walks in front of an electronic board showing stock information on the first trading day after the New Year holiday at a brokerage house in Shanghai. Photo: Reuters

The dollar was steady after hawkish comments from top Federal Reserve officials bolstered expectations the world`s no. 1 economy was strong enough to keep policymakers on course to further raise rates this year.

The Dow rose 0.6% on Tuesday to notch a record closing high for the eighth straight session, lifted by strong earnings reports from Wal-Mart and Home Depot.

That followed a strong showing in European equities, which were boosted by upbeat German and French factory activity data, with Germany`s DAX rising to its highest in nearly two years.

"U.S. stock markets are currently a great example of the old trading adage that the trend is your friend," wrote Ric Spooner, chief market analyst at CMC Markets.

"The slide in the euro as Marie Le Penn`s polls improve was the other key feature of international markets last night and is an early indicator that French elections could loom larger on the market radar over coming weeks."

While the European political concerns remain a drag on the euro, the dollar received a further boost following hawkish comments from Cleveland and Philadelphia Fed Presidents Loretta Mester and Patrick Harker.

Mester expressed comfort at raising rates at this point, while Harker reportedly said a March rate hike was on the table.

The financial markets are waiting on the Fed`s Jan. 31-Feb. 1 policy meeting minutes due later in the day for fresh hints on the central bank`s stance towards interest rates.

In commodities, crude extended gains from the previous day when it touched 1-1/2-month peaks on OPEC`s optimism for greater compliance with its deal with other producers including Russia to curb output.