Asian shares took their cue from Wall Street, where the Dow and the S&P 500 both lost 0.2 percent on Friday after data showed the U.S. economy grew at its weakest pace in three years in the first quarter. 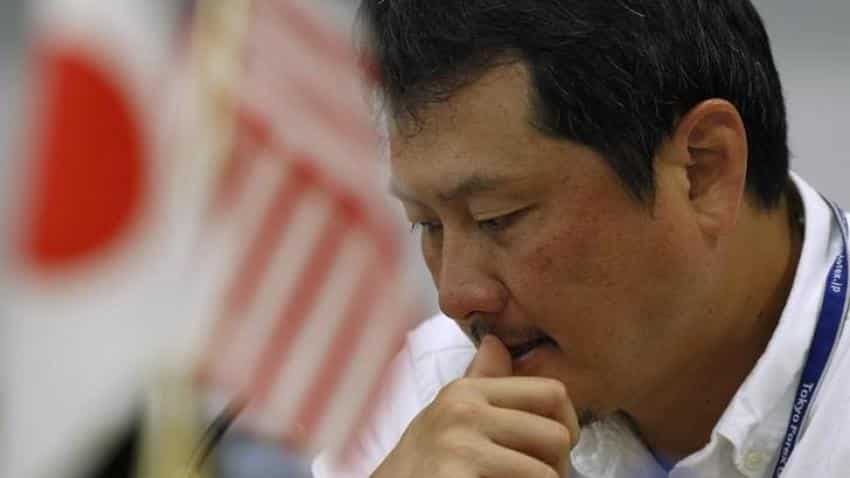 A foreign exchange broker rests his thumb on his lips as he is pictured near Japanese and American flags at a trading room in Tokyo. Photo: Reuters
Written By: Reuters
RELATED NEWS

Asian stocks struggled for traction on Monday after weaker-than-expected U.S. economic growth data, while the dollar dropped against the yen amid tensions over North Korea and slipped versus the euro on evidence of strong euro zone inflation.

Many markets in Asia and Europe are closed for Labour Day.

Asian shares took their cue from Wall Street, where the Dow and the S&P 500 both lost 0.2 percent on Friday after data showed the U.S. economy grew at its weakest pace in three years in the first quarter.

Asian markets were little fazed by China`s official manufacturing survey on Sunday which showed growth in the country`s factories slowed more than expected in April to a six-month low.

Much of the decline was attributed to recent sharp falls in iron ore and steel prices, with production and total new order growth cooling slightly but remaining solid. Analysts have widely expected China`s overall growth momentum to moderate in coming months after a strong first quarter.

The dollar, which had climbed to a four-week high against the yen last week, lost support as U.S. Treasury yields declined in the wake of a mixed batch of economic indicators released on Friday.

The greenback was last down 0.3 percent at 111.240 yen, with geopolitical concerns also seen playing a part in supporting the safe-haven Japanese currency.

"Lower Treasury yields are weighing on the dollar, which is also facing pressure against the yen due to risk aversion following North Korea`s missile launch over the weekend," said Masafumi Yamamoto, chief forex strategist at Mizuho Securities in Tokyo.

North Korea carried out a missile test on Saturday, with Pyongyang acting increasingly in defiance of pressure from the United States and its own ally China.

The common currency was lifted after euro zone inflation data on Friday rose more than expected and returned to the European Central Bank`s target.

The euro was in close range of the 5-1/2-month high of $1.0951 struck early last week on relief over Emmanuel Macron`s victory against anti-euro nationalist Marine Le Pen in the first round of France`s presidential elections. The runoff vote is on May 7.

The pound was 0.15 percent lower at $1.2930 after climbing to a seven-month high of $1.2957 on Friday, when traders seen to have closed off bets against the pound ahead of Britain`s long bank holiday weekend.

The dollar index against a basket of major currencies slipped 0.1 percent to 98.961.

In commodities, crude oil prices slipped amid lingering concerns that an OPEC-led production cut has failed to significantly tighten an oversupplied market.

Gold rose, lifted by a weaker dollar and equities. Spot gold extended Friday`s gains to rise 0.15 percent to $1,269.50 an ounce.