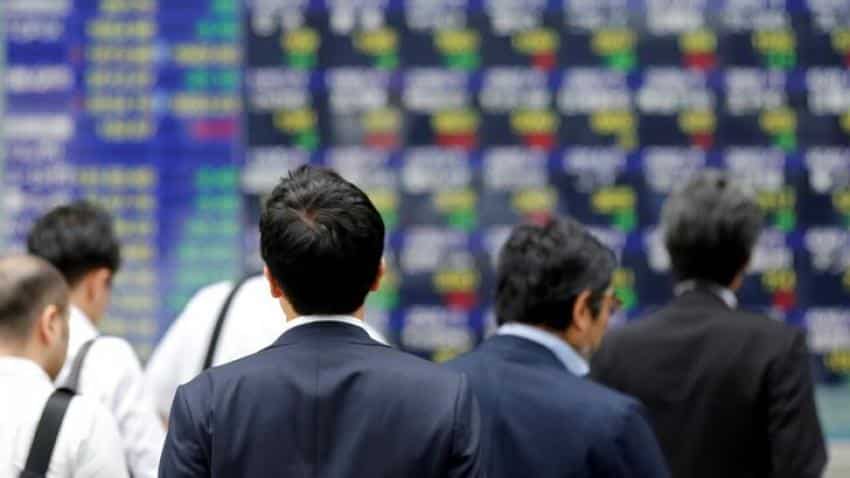 Asian shares crept toward all-time peaks on Monday after Wall Street boasted its best start to a year in over a decade, with brisk economic growth and benign inflation proving a potent cocktail for risk appetite.

The Philippines is already at a record, while Australian stocks eked out another decade top. Japan`s Nikkei was closed for a holiday but touched its highest since 1992 last week.

"It was the global synchronised growth that drove earnings and equity markets higher last year and the global economy has entered 2018 firing on all cylinders," said analysts at Bank of America Merrill Lynch, predicting the global economy could expand at 4 percent or more this year.

"This growth is keeping our quant models bullish and driving earnings revisions to new highs," they added. "We stay long outside the U.S., with Asia ex-Japan and Nikkei our growth plays, Europe still for yield."

Friday`s U.S. jobs report did nothing to challenge that outlook.

While payrolls missed forecasts, the report was perfect for equities given unemployment stayed low but with little sign of the inflationary pressures that would make the Federal Reserve more aggressive in tightening policy.

Wall Street has already enjoyed its best start to a year in more than a decade, with the Dow up 2.3 percent last week and the S&P 500 2.6 percent. The tech-heavy Nasdaq led the charge with a rise of 3.4 percent.

The quarterly U.S. earnings season kicks off this week with the Street expecting solid growth of around 10 percent, though many companies are also likely to be announcing one-off charges to account for recent tax changes.

The next major data hurdles will be U.S. consumer prices and retail sales on Friday. In Asia, China reports inflation on Wednesday and international trade numbers on Friday.

In currency markets, the dollar had steadied for the moment after a rocky couple of weeks.

With economic activity picking up globally, the dollar has been undermined by expectations the Fed will not be the only central bank tightening policy this year.

On Friday, surprisingly strong Canadian jobs data stoked speculation interest rates there could rise as early as next week and sent the local currency to a three-month peak.

Upbeat euro zone data has likewise underpinned the single currency at $1.2038, though it has so far failed to clear major chart resistance at the September top of $1.2092.

The dollar has fared better on the yen at 113.13, thanks in part to expectations the Bank of Japan will stick with its super-easy policies.

Japanese Prime Minister Shinzo Abe on Sunday called on central bank governor Haruhiko Kuroda to keep up efforts to reflate the economy, but added he was undecided on whether to reappoint Kuroda for another five-year term.

The combination of a soft U.S. dollar and strong global growth has been positive for commodities, with everything from coal to iron ore to copper in demand.

Oil prices reached their highest since 2015 helped in part by political tensions in Iran, the third-largest producer in the Organization of the Petroleum Exporting Countries (OPEC).