"The markets had relied on expectations of monetary stimulus for a long time but that is changing with bond yields rising around the world. You have rising interest rates and falling EPS. That`s obviously bad for stocks," said Norihiro Fujito, senior investment strategist at Mitsubishi UFJ Morgan Stanley Securities. 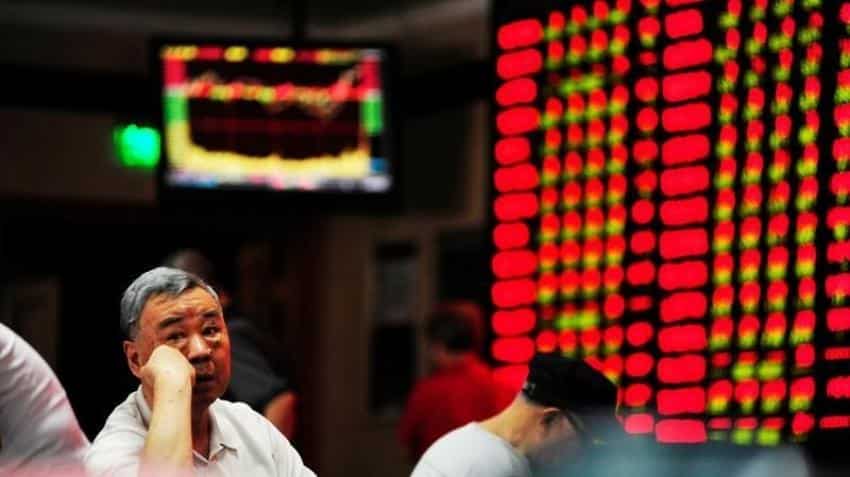 An investor sits in front of an electronic board showing stock information at a brokerage house in Nanjing. Photo: Reuters

Asian shares flirted with three-week lows on Wednesday after a dour start to Wall Street`s corporate earnings season knocked U.S. stocks, while the dollar and Treasury yields rose on growing expectations of a U.S. rate hike in December.

The British pound jumped back from lows in a volatile trading session though concerns about a "hard Brexit" are likely to keep the currency under pressure.

On Wall Street, U.S. S&P 500 Index fell 1.2 percent to near one-month low, and dipped below its 100-day moving average - seen as a major support - for the first time since June.

Market participants are also increasingly eyeing politics as the Nov. 8 U.S. elections draw near. The turmoil enveloping Republicans and the party`s presidential candidate Donald Trump is prompting some speculation that a victory by Democrat Hillary Clinton could be accompanied by big gains for her party in Congress, investors said.

At the same time, investors are bracing for the U.S. Federal Reserve to raise interest rates by the end of the year, most likely in December.

"The markets had relied on expectations of monetary stimulus for a long time but that is changing with bond yields rising around the world. You have rising interest rates and falling EPS. That`s obviously bad for stocks," said Norihiro Fujito, senior investment strategist at Mitsubishi UFJ Morgan Stanley Securities.

U.S. interest rate futures are pricing in about 75 percent chance of a rate hike by December, little changed over the past couple of days.

The spectre of rising U.S. interest rates helped to lift the dollar`s index against a basket of six major currencies to its highest level in seven months.

The British pound jumped 1.3 percent in thin early Asian trade to $1.2275, after having fallen nearly five percent in the previous four sessions.

Some market players suspected sterling benefited from a report by Bloomberg that British Prime Minister Theresa May has accepted that Parliament should be allowed to vote on her plan for taking Britain out of the European Union.

"The pound is being bought back after its big falls. But given that Brexit will remain a major theme for the markets, its likely to be capped," said Shinichiro Kadota, chief currency strategist at Barclays Securities Japan.

Oil prices retreated from one-year highs, after OPEC said it was trying to reach a global agreement to cap production for at least six months amid doubts about how much that would reduce a crude glut.