"The markets are focusing on when the Fed will raise rates next time or the pace of its rate hike, so the tone of Fed Chair Janet Yellen will be closely watched," said Masahiro Ichikawa, senior strategist at Sumitomo Mitsui Asset Management. 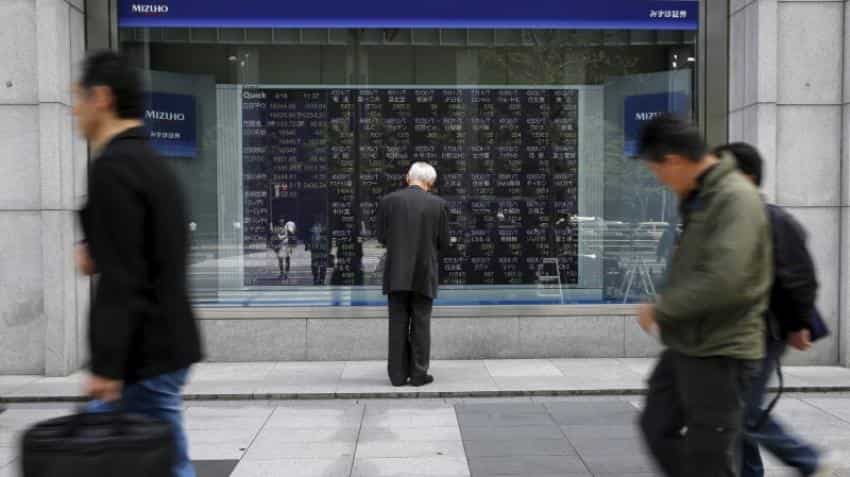 Man looks at a stock quotation board outside a brokerage in Tokyo. Photo: Reuters
Written By: Reuters
RELATED NEWS

Asian shares started the week on a cautious note on Monday as strong U.S. jobs data cemented expectations of a hike in U.S. interest rates this week and as oil prices plunged to 3 1/2-month lows on fresh worries of oversupply.

MSCI`s broadest index of Asia-Pacific shares outside Japan was flat, with a fall in resource-heavy Australian shares offset by a rise in tech-heavy South Korean shares.

Japan`s Nikkei inched lower, with the mood also soured by an unexpected drop in machinery orders, which highlighted the fragility of the country`s economic recovery.

Yet while the data all but sealed a rate increase by the Federal Reserve on Wednesday, the market`s focus now shifting to the pace of rate hikes beyond March.

"The markets are focusing on when the Fed will raise rates next time or the pace of its rate hike, so the tone of Fed Chair Janet Yellen will be closely watched," said Masahiro Ichikawa, senior strategist at Sumitomo Mitsui Asset Management.

U.S. interest rate futures are pricing in about a 50 percent chance of another rate hike in June. By the end of 2017, a total of nearly three hikes were fully priced in, including the likely move in March.

In Reuters poll of primary dealers, twelve of the 23 dealers saw a rate increase to 1.00-1.25 percent by the June 13-14 meeting, while 10 expected such a move by the Fed`s September meeting.

U.S. junk bonds have also faltered, with high-yield bond ETF posting its biggest weekly loss in more than a year.

Global bond prices came under pressure also following a report that some European Central Bank policymakers had discussed the possibility of rate hikes before the end of its quantitative easing programme.

A break of those previous peaks in major bond yields could spark a fresh sell-off in global bond markets.

The talk of ECB rate hike, even though it is still seen as a remote possibility, helped to lift the euro.

The dollar slipped to 114.85 yen from Friday`s seven-week high of 115.51 yen after U.S. Commerce Secretary Wilbur Ross said on Friday that Japan will be on high on the U.S. priority list for trade agreements.

Traders suspect Washington, keen to reduce its trade deficit, may put pressure on Japan not to cheapen the yen in upcoming bilateral economic talks.

Oil skidded to 3 1/2-month lows after posting biggest three-day loss in a year by Friday as investors continued to flee bullish positions on worries that OPEC-led production cuts have not yet reduced a global glut of crude.

U.S. crude futures dropped 1 percent to $47.96 per barrel, having shed more than 11 percent so far this month.