Airbus hinted on Tuesday at a price battle and imminent aircraft revamp to counter a possible new Boeing mid-sized jet, promising a "left hook, right hook" from two of its established models 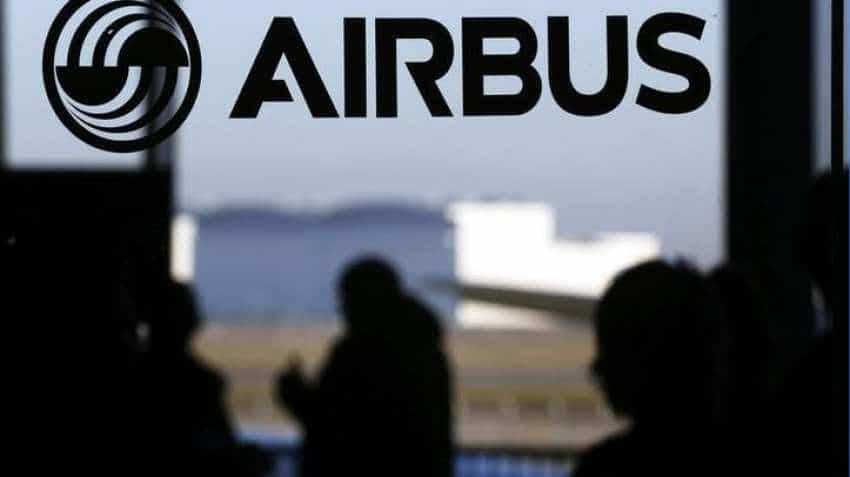 Airbus is meanwhile weighing plans to boost the A321 with a long-range version called A321XLR to pre-empt the Boeing jet. Image source: Reuters
Written By: Reuters
RELATED NEWS

Airbus hinted on Tuesday at a price battle and imminent aircraft revamp to counter a possible new Boeing mid-sized jet, promising a "left hook, right hook" from two of its established models. U.S. planemaker Boeing is studying whether to launch a 220-270-seat jet wedged between traditional twin-aisle models like the Airbus A330 or its own 787, and the industry`s bread-and-butter single-aisle models like the A320/321 and Boeing 737.

Airbus aims to defend that space with its own A330neo at the top end and the best-selling A321neo at the bottom - two models boasting new engines on older airframes.  "Those programmes are both so mature that it gives Airbus pricing flexibility to address this middle-of-the-market segment," sales chief Christian Scherer said.

He promised what he described as a "left-hook, right-hook approach" to that part of the market, using the two Airbus jets, as airlines replace Boeing 757 and some larger 767 aircraft. Boeing says its possible mid-market aircraft would be significantly more efficient than either Airbus model, but it is under pressure from airlines to develop it at the right price.

Boeing continues to promote the project behind the scenes, while toning down public discussions as it focuses on resolving the crisis over its grounded 737 MAX, airline sources say. Airbus is meanwhile weighing plans to boost the A321 with a long-range version called A321XLR to pre-empt the Boeing jet.
Chief Executive Guillaume Faury hinted confirmation could come at next month`s Paris Airshow, saying the A321LR was the world`s longest-range single-aisle jet plane "for the moment".

The two giants are playing reverse roles at the top end of the $150 billion annual jet market, where Boeing`s upcoming 406-seat 777X - a derivative of its 777 mini-jumbo with new engines - is up against the newer and slightly smaller A350-1000. Scherer mocked the 777X as a "re-engined Hummer" hobbled by excess weight compared with the carbon A350. Boeing, which recently won a deal to sell the 777X to British Airways after a gap in sales, maintains it is the most efficient plane per seat.

Weight is one factor among several determining performance. Boeing has outsold the A350-1000 almost two to one with its 777X, but its order book is heavily dependent on Gulf carriers whose expansion plans look increasingly fragile, analysts say.

MARKET REASSURANCE
New operations chief Michael Schoellhorn said Airbus had launched studies on squeezing more efficiencies out of its core European factories and on whether it needed to buy capabilities currently left with its suppliers. Airbus is talking to Canada`s Bombardier about a Belfast, Northern Ireland, wings plant that is up for sale. The plant makes wings for the 110-130-seat A220 jet programme that Bombardier sold to Airbus last year. Airbus announced plans to bump up the range of the jet to stimulate more sales.

As it ramps up production, Airbus also played down concerns from airlines that the aviation industry is reaching the top of its business cycle after a near decade-long expansion. "The market remains quite positive" and less dependent on economic cycles than before, Scherer said. Airbus officials nonetheless voiced concerns over the impact of renewed trade tensions on demand.

Airbus and Boeing have had a weak start to the year and last week global airlines body IATA said it expected to cut 2019 industry profit forecasts. Both companies have posted more cancellations than new business in the first four months of the year, with Boeing worst affected as it wrestles with the grounding of its 737 MAX.

On Monday, Reuters reported Airbus had lost a bid to oust Boeing as sole provider of wide-body jets to Air New Zealand.  But in a surprise European breakthrough, China Airlines this month forged a deal paving the way for the Taiwan carrier to switch its single-aisle fleet to Airbus from the Boeing 737 MAX. The deal to replace older 737s took years to complete and was originally drafted before the 737 MAX crisis.