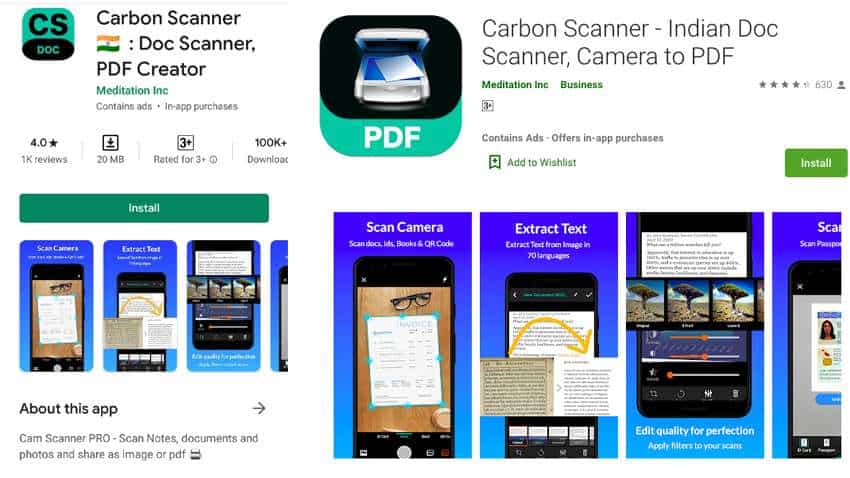 Recently, Modi government took a big decision and banned 59 apps due to security reasons. Also, Prime Minister Narendra Modi asked citizens to be 'Aatmanirbhar' to make our nation more self-reliant. Amid all this, an Indian mobile app studio KShark Apps has developed an app - Carbon Scanner - which is now trending and has now crossed 100k downloads in 7 days.

Carbon Scanner belongs to a category of Document Scanner applications which turn the phone of the user into a high quality camera scanner with realistic filters. It uses cutting-edge Cloud OCR technology to convert the scanned document into digital text format. Using Carbon Scanner anybody can scan their Government IDs, passport, books and other important documents and store them safely in their android device. As per the company, Carbon Scanner is trending in top charts just 2 weeks after its release and getting 15k downloads every day.

Kartik Sharma, CEO and Founder of KShark Apps, the company behind Carbon Scanner claims their app is 10 times more secure than ‘CamScanner’ because of the way it’s developed. "Carbon Scanner enables Cloud Sync by allowing users to upload documents to their Google Drive and Dropbox accounts, thus users have complete control of where their data is stored and how it’s accessed," mentions Kartik.

Kartik adds, "Moreover, the app itself is highly secure and protected by multi-tier protection provided by the Android platform. All scans are stored in encrypted local storage and synced to the personal secure cloud platform chosen by the user, there is no question of virus or spyware doing any harm to the documents. KShark Apps is also taking help from some IT security researchers to make Carbon Scanner even more secure for its users."

"Carbon Scanner by default supports 6 filters to enhance the quality of the scanned documents. The filters like Grayscale, BW1 and BW2 are perfect if you are looking to scan an official document. The special filter called Magic filter pops out handwritten notes and makes them eligible for sharing. Carbon Scanner also has brightness, sharpness and contrast modulation so the user can get perfect document quality with just a few clicks," claims KShark Apps.

"The feature that stands out in Carbon Scanner is its Cloud OCR technology. Using these special features, users can convert their scans into digital text which can later be shared with other users. The text recognition technology in Carbon Scanner supports Indian languages like Hindi, Kannada, Malayalam, Telugu, Tamil, Bengali and many others. KShark Apps is building Carbon Scanner with the aim to compete with big global players in the Document Scanner niche, hence they are focusing on high quality features and bringing them to India at an affordable price," a statement by the company added.

Carbon Scanner is free to use and is available in over 145 countries. Although the app is available for Android users only, an iOS version is coming soon, says KShark.