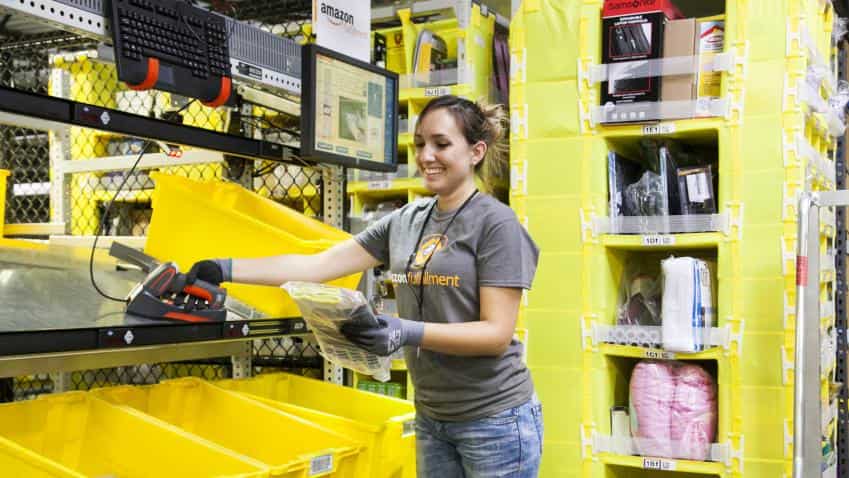 A file photo of an Amazon employee. Pic: Company Website

E-commerce companies like Amazon, Flipkart and Snapdeal may have hit a jackpot with their mega-sales in October.

“E-tailers are likely to surpass all sales expectations in the ongoing festive sale days and for the month of October 2016 as a whole...As a result of the bumper sales performance of e-tailers, the gross GMV for e-tailing industry is likely to be Rs 6,500-7,700 crore ($1-1.2 billion) for the ongoing festive week (October 1- 6),” research firm RedSeer Consulting said in its report.

RedSeer had earlier pegged the industry GMV at $1.5-1.7 billion for October or $18-20 billion for the year.

This was not much considering that in the same month last year e-commerce companies had sold goods worth Rs 9,000 crore.

After tepid sales and slowing consumer interest in shopping online, e-commerce are expected to clock in almost 35-40 million units in sales during the six-day long period (October 1-6).

The e-commerce sales this season is much higher than earlier expected as the new foreign direct investment (FDI) rules were expected to play spoil sport to the festivities of these companies. Just this week on Monday RedSeer Consulting has estimated e-commerce companies put together will not sell goods worth more than Rs 10,000 crore in October. It also included the peak of the festive season the Diwali period.

The new FDI regulations had forced e-commerce companies to cut back on discounting and this was regarded as the prime reason that would lead to a slowdown in sales.

The annualised GMV for e-commerce companies had fallen 5-10% in the second quarter of 2016.

While the growth during the festive period was earlier expected to by only 11%, with buoyant buying sentiment among consumers it is now expected post a growth of 18-44%.

Amazon’s festive sale had started from October 1 and closed yesterday. Its rivals, Flipkart and

Snapdeal, which started rolling out festive offers from October 2, ended their sale today.

The US-based e-tailer said sales on its platform in India grew three-fold compared to last year to over 15 million units during its five-day festive sale.

Similarly, on Tuesday, Flipkart said it had crossed a "historic first" for an e-commerce company in India, crossing Rs 1,400 crore sales on its platform in a single day.

Industry experts are of the view that these companies may announce more such festive sale days closer to Diwali.

The e-commerce companies had made significant investments in ramping up products on their platforms as well as delivery and logistics capabilities to ensure the operations run smoothly.